UAE formalizes relations with Israel, after years of discreet contacts 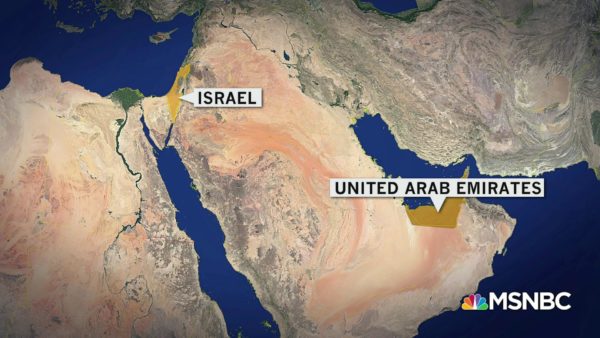 UAE formalized its relations with Israel after years of discreet contacts , a move reportedly intended to end the Mid East polarization. The US welcomed the move while Iran blasted it as “shameful”
Share:

DUBAI – The United Arab Emirates became the first Gulf Arab country to reach a deal on normalising relations with Israel on Thursday, securing an Israeli commitment to halt further annexations of Palestinian territories.

The agreement caps years of discreet contacts between the two countries in commerce and technology and may help the Gulf monarchy, increasingly assertive in regional hotspots, craft an image as a force for stability in a turbulent Middle East.

Senior official Anwar Gargash said the deal had helped defuse what he called the ticking time-bomb of Israel’s planned annexation of settlements in the occupied West Bank that was threatening a two-state solution to the Israeli–Palestinian conflict.

Gargash, minister of state for foreign affairs, said the agreement was a bold but necessary step to take in the region.

“The region is very polarised. You will hear the usual noise but I think it is important to move forward,” he told reporters in a briefing.

Israel has had no diplomatic relations with Arab countries in the Gulf, but common concerns with the UAE about Iran’s regional influence and activities had led to a limited thaw in relations in recent years.

A joint statement by Israel, the UAE and the United States issued in Washington hailed the accord as a “historic diplomatic breakthrough” that would advance peace in the Middle East.

Asked by Reuters whether a UAE embassy could potentially be based in Jerusalem, Gargash said it was premature to discuss the issue.

“We will definitely not locate anything in Jerusalem. West or East. Unless there is a final agreement between the Israelis and Palestinians.”

Gargash urged the Israelis and Palestinians to return to the negotiating table but said that the issue was not in the hands of the UAE.

Delegations from Israel and the UAE, a regional business and investment hub, will meet in coming weeks to sign bilateral agreements on investment, tourism, direct flights, security, telecommunications and other issues, the statement said.

In Washington, senior White house officials said that under the deal, Israel had agreed to suspend applying sovereignty to areas of the West Bank that it had been discussing annexing.

The UAE has adopted a more assertive foreign policy in recent years, flexing its muscles to counter what it sees as an Islamist threat in countries like Sudan and Libya, and working with Washington to confront the influence of adversary Iran.