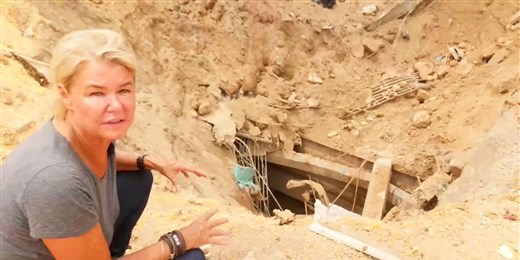 Sky News reporter is pointing at the entrance of one of the rooms discovered under the site of Beirut Port explosion. According to reports maze of tunnels running under the Lebanese capital – designed for Hezbollah to store munitions and explosives supplied by Iran.
Share:

Investigators working near ground zero at Beirut’s port have uncovered what may be a series of underground facilities, despite denial by the government of their existence.

As many as 60 people remain missing following Tuesday’s massive blasts in the Lebanese capital, with at least 158killed and over 6,000 suffering injuries of varying severity. Researchers say the ammonium nitrate believed to have caused the explosions had an explosive power equivalent to that of a small nuclear bomb.

Russian and Turkish rescue teams have joined Lebanese army and civil defence forces in scouring the wreckage for evidence and looking for survivors.

The discovery of the underground facilities raised many questions , specially since many underground facilities and tunnels of the Iranian backed Hezbollah have been discovered over the years . Hezbollah currently controls all the branches of government as well as the ports, airports and land crossings .President Michel Aoun, Speaker Nabih Berri and PM Hassan Diab are all allied with Hezbollah.

One lady tweeted by telling president Michel Aoun .” This is an interesting discovery after the blast ” . Do you have any authority left ? As a personal advise check under the Baabda presidential Palace and under the ministry of defense for underground facilities , this is a free advice take it “

Investigators on the site of the Beirut explosions have discovered what looks like the start of a series of underground panic rooms.https://t.co/fDJz45yJxs

Tuesday’s powerful explosion leveled much of the port and the surrounding blocks, with thousands of buildings across Beirut having their windows blown out by the powerful shockwave.

The cause of the incident remains unclear, although it is known that there was an estimated 2,750 tonnes of ammonium nitrate stored at a one of the port’s warehouses, brought to the city in a derelict ship in 2013 and located there ever since amid a legal battle between officials and courts.

Aoun’s credibility following the explosion suffered greatly and specially within the Christian community , since he was very well aware of the danger of the Ammonium Nitrate that was stored at hanger # 12 at the port . Several predominantly Christian neighborhoods like the Saifi, Ashrafiyeh , Karantina Martyr Square were destroyed by the blast , since the port is right in the center of the capital Beirut .