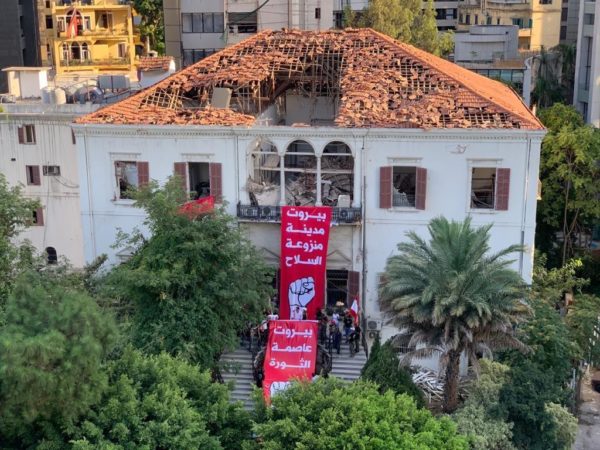 Led by retired army officers, anti – government demonstrators peacefully entered the building to express anger over the Beirut explosion and economic woes, before being forced out 3 hours later

BEIRUT, Lebanon — The explosion that ripped through Beirut this week handed a resurgent protest movement an unexpected and brief victory Saturday, almost literally breaking down the doors of the foreign ministry.

The famed imperial staircase at the ministry’s entrance was packed with some 200 demonstrators and retired army officers, who called the ministry the new headquarters of their uprising — before soldiers arrived three hours later to force everybody out.

Some brandished nooses in a display of seething anger over a deadly Tuesday blast that killed more than 158 people and wounded at least 6,000.

The explosion that disfigured the city and shocked the world is widely perceived as a direct consequence of the incompetence and corruption that have come to define Lebanon’s ruling class.

At first, “there were about 100 of us,” said Tony Kayrouz, one of a group of retired army officers who led the takeover.

“There were a few policemen manning the gate, they opened it, and we entered, there were no scuffles,” Kayrouz told AFP.

The retired army officers were led by a former general who once answered to President Michel Aoun, when he was the country’s military chief in the 1980’s.

“I had hope in Aoun,” the general said, but now, “this republic is run like a farm.”

Rammah and retired army officers have been a mainstay of a protest movement that started in October to demand the removal of a political class deemed inept and corrupt.

Many are boiling in anger over the country’s economic woes, which include the collapse of the Lebanese pound that has devalued their pensions.

“Our pensions are now worth 20 or 40 dollars (a month), while deputies and the ministers eat away at the country,” one retired soldier said.

“The people must reclaim what is theirs.”

‘Capital of the revolution’

Demonstrators at the ministry unfurled a banner that covered the entire facade of the building.

“Beirut, capital of the revolution,” it read.

“Congratulations, we have reclaimed the ministry,” rejoiced one protester

Beneath elegant wall engravings, protesters pulled Aoun’s portrait off the wall and smashed it on the ground, where it was repeatedly stepped on.

Portraits of every top diplomat that ever headed the ministry were arranged on a wall cracked by the blast, but one former foreign minister was missing: Gebran Bassil, Aoun’s son-in-law and head of the Free Patriotic Movement, founded by the president.

Bassil was one of the main targets of October’s protest movement and has since become a highly reviled figure among activists and demonstrators.

It was not clear if his picture was dislodged by the blast or removed by protesters who stormed the foreign ministry on Saturday.

Visitors relished the takeover, posing behind a pulpit usually used for diplomatic press conferences. Others wandered into conference rooms and offices, where they snapped selfies.

“This is where Gebran Bassil once sat,” scoffed one protester, pointing to a stylish sofa lacking an armrest.

“Isn’t there any other ministry we could storm?” quipped another, as groups raided the nearby ministries of energy and the economy.

But the foreign ministry takeover was cut short when a large army reinforcement muscled in, forcing everyone out.