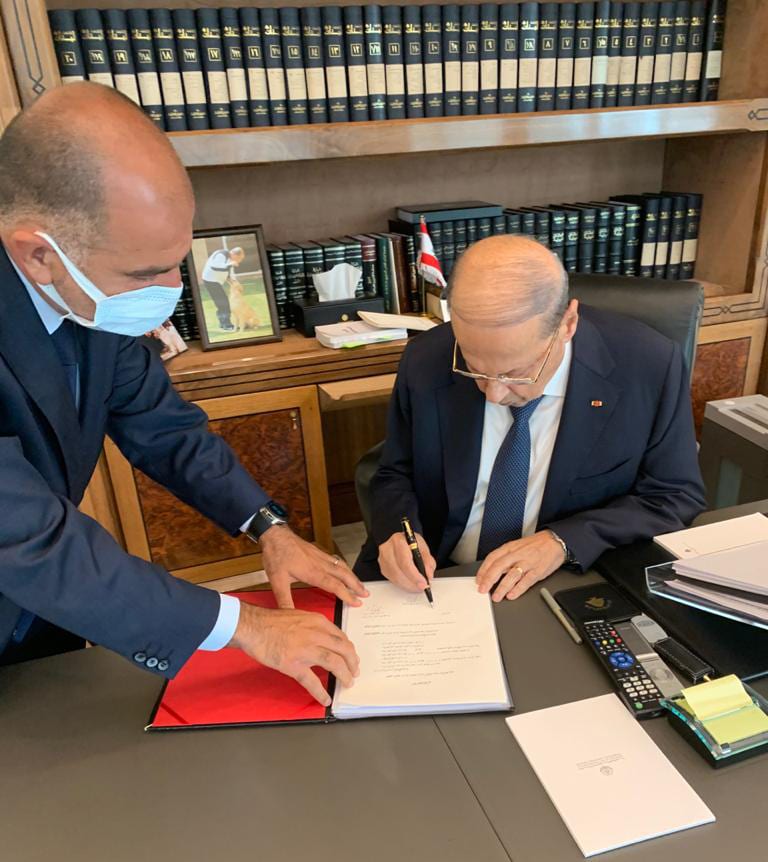 The move came hours after Nassif Hitti’s surprise resignation from the position.

Hitti resigned from his position over the government’s poor handling of the country’s crisis and lack of willingness to implement essential reforms.

“I had high hopes for change and reform, but the reality aborted the fetus of hope,” Hitti said in his resignation

Wehbe also served as acting secretary-general of the Foreign ministry during Gebran Bassil’s tenure. Following his retirement as a diplomat, he moved to the presidential palace where he served as President Aoun’s diplomatic affairs adviser.

“Will this cry of deep frustration move #Lebanon to finally work on reforms, on measures taking care of the Lebanese, sinking every day deeper into poverty and desperation?” Kubis tweeted.

Prime Minister Hassan Diab accepted Hitti’s resignation after meeting him at the Grand Serail, and later held talks with President Michel Aoun over a replacement.

“Lebanon today is not the Lebanon we loved, that we wanted to be a beacon and model, it is slipping to become a failed state God forbid,” Hitti was quoted as saying .

Hitti said his resignation was due to his inability to “perform my duties during this historic and crucial time, and due to the absence of a vision for Lebanon that I believe in, a free, independent, effective and radiant nation in its Arab environment and the world.”

The absence of an effective will to achieve comprehensive and structural reform, which is a key demand by the international community for Lebanon was also a reason for Hitti’s resignation, according to the statement.

“I resigned from my duty as foreign minister, hoping that the government and those who manage the state re-evaluate many of the policies and practices, and give priority to citizens and the nation over all other considerations and differences,” Hitti said.

“I participated in this government on the basis that I have one employer, Lebanon,” he added.

“There are conflicting employers and interests in this country, and if they are not united to serve and rescue the Lebanese people, then the boat, God forbid, will sink with everyone on board,” Hitti concluded.

Hitti was appointed as foreign minister as part of Diab’s government in January. The government, backed by Hezbollah and its allies, was appointed after a popular uprising against the political class which demanded political and economic reforms as well as an end to corruption. The Lebanese economy since teetered on the verge of collapse and the pound lost around 80 percent of its value on the black market.

According to political sources, in addition to the government’s performance, a number of other reasons led to this decision, including Diab’s criticism of the French foreign minister who visited Lebanon recently, and Hitti feeling undermined as foreign minister after General Abbas Ibrahim, a top security official was dispatched by Aoun to the Gulf to ask for aid, but failed

Lebanon is facing its worst economic and financial crisis, with the population experiencing electricity blackouts, poverty, mounting piles of garbage on the streets and a severely devalued national currency, which has drastically decreased their purchasing power.

Hitti’s resignation comes after France’s top diplomat Jean-Yves Le Drian scolded Lebanon’s leadership during a visit last month for failing to take the necessary measures to save the country from collapse.

The government, which defaulted on its sovereign debt for the first time in March, has pledged an ambitious raft of reforms and two months ago entered into talks with the IMF.

However, the negotiations have stalled, with two top members of the government’s own team resigning, allegedly in frustration at the administration’s lack of commitment to reform.

The government says it needs more than $20 billion in external funding, which includes $11 billion pledged by donors at a Paris conference in 2018 that was never delivered over lack of reforms.

Hitti’s resignation shows “that Lebanon is in a state of total confusion,” said Hilal Khashan, a professor at the American University of Beirut.

“This government of so-called technocrats has to always refer back to those who put it in office before it can act on any matter,” he said, meaning that it “is not autonomous.”