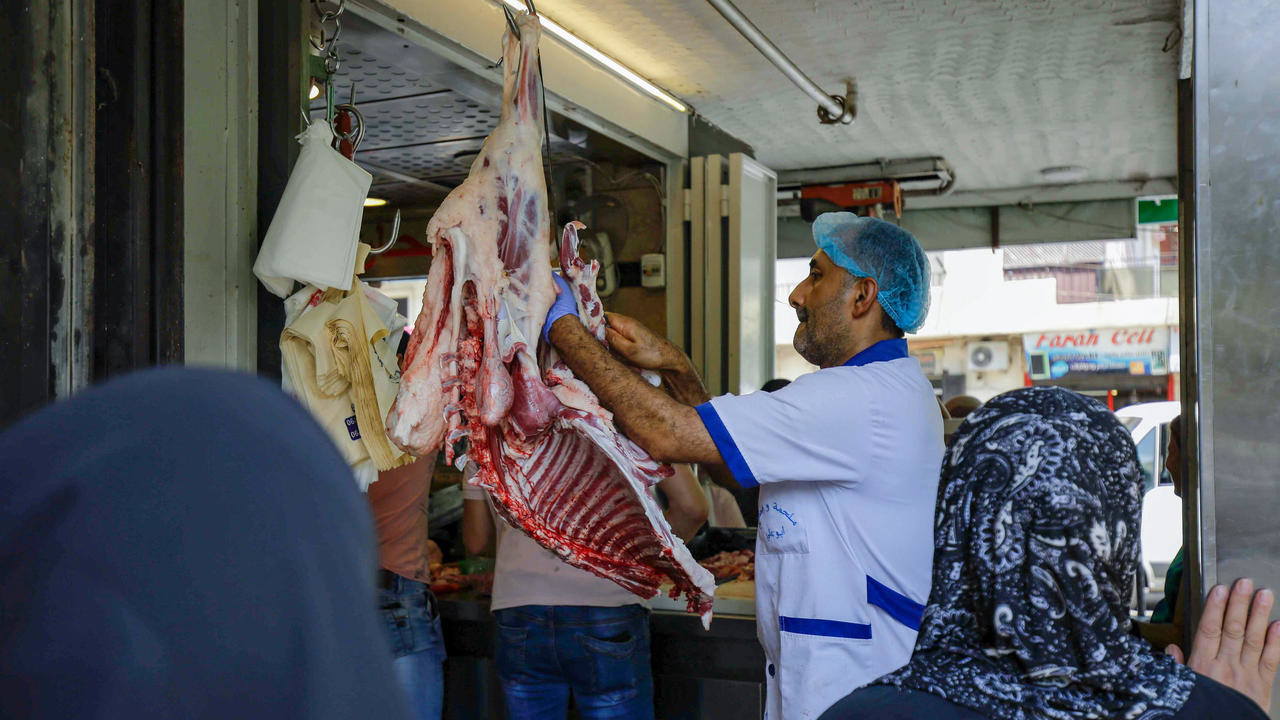 A butcher shop in Tripoli north Lebanon – Tradition dictates that Muslims donate cuts of mutton during Friday’s Eid al-Adha festival , but the financial crisis is forcing the Lebanese take the meat off the menu. The local currency lost over 80 % of its value Ibrahim CHALHOUB AFP
Share:

Tradition dictates that Muslims donate cuts of mutton during Friday’s Eid al-Adha festival, which would spell brisk business for butcher Abdulrazak Darwish but Lebanon’s economic crisis has cast a pall over his trade.

“This year has been the worst for us because of soaring inflation,” said the 54-year-old resident of the northern city of Tripoli.

“There is no demand for meat or requests from clients to slaughter sheep this Eid al-Adha,” he told AFP from inside his nearly empty store near the city’s port.

Thousands of sheep are usually slaughtered annually in Lebanon at Eid al-Adha — the festival of sacrifice — one of two major holy days observed by Muslims across the world.

It is custom for the better-off to donate cuts of mutton to needy members of their community as a form of religious charity during the holiday.

But that might not happen this year, as the country is now mired in its worst economic crisis since the 1975-1990 civil war.

The Lebanese pound has in past months lost around 80 percent of its value against the dollar on the black market.

In a country where most consumer goods are imported, that devaluation has had a huge impact on prices and the purchasing power of ordinary Lebanese.

In Darwish’s butcher shop, one lonely cut of mutton hangs from a hook. Fridges next to it are completely empty.

For the vast majority of people whose income is not in dollars, the cost of a sheep has more than tripled since last year.

Darwish says the price he pays his suppliers is already prohibitive and leaves him with “no margin to make a profit”.

Tripoli already harboured some of the country’s poorest but the combined effect of the monetary crisis and coronavirus lockdowns is sentencing thousands of families to hunger.

This has upset Eid al-Adha mutton donations, said Sheikh Nabil Rahim, who connects wealthy families with the needy during the Islamic holiday.

“Donations have severely dwindled by more than 80 percent which means no mutton this Eid al-Adha,” he told AFP from his office, a stack of religious textbooks piled on his desk.

“A big segment of the Lebanese population are now preoccupied with themselves and their personal problems as a result of the economic crisis,” explained the man who runs an Islamic radio station.

Sitting on a chair outside her Tripoli apartment, Mona al-Masri said she is preparing for a frugal Eid al-Adha this year because of the downturn.

“Our priorities have changed,” said the 51-year-old, explaining she is not planning to buy any meat for the feast, which usually abounds with lamb and mutton.

Instead, she will prepare dishes using lentils, vegetables and herbs, she told AFP, explaining she usually relies on donations for mutton.

“This year it seems no one is planning to distribute anything,” she said.

Eid al-Adha will still be celebrated this year even though many mosques will not hold public prayers and travel restrictions will limit annual hajj pilgrimages and traditional family gatherings for the holiday.

Butchers have faced further complication due to power outages that have increased as state failure worsens.

“We can’t buy large quantities of meat, not even during the holidays,” said Ali Hassan Khaled, a 50-year-old butcher in a low-income Tripoli neighbourhood.

He said he usually slaughters at least 100 sheep for his customers during Eid al-Adha, but this year he has only received 10 orders.

Salima Hijazi, a 33-year-old Tripoli resident, is one of them.

The woman usually prepares stuffed vine leaves with mutton for the feast — a staple holiday dish. But this year, mutton is no longer on the menu.

“Our incomes are nearly worthless… and we are now forced to change our eating habits,” she said.