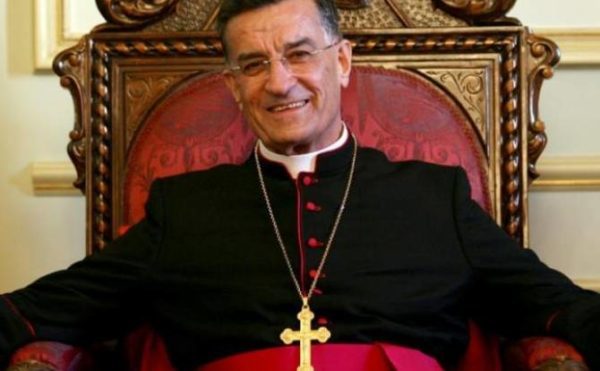 Maronite Patriarch, Cardinal Mar Bishara Boutros Al-Ra’i seems to be determined as ever in forging ahead with his campaign about Lebanon neutrality towards regional conflicts despite opposition from Hezbollah and its allies

This appears to be a major concern for Hezbollah which has aligned itself with Iran in the so called axis of resistance, a position which violates the 2012 Baabda Declaration that calls for isolating Lebanon from regional conflicts .

For this reason Hezbollah has been sending various types of influential people to Rai’s summer residence to dissuade him from carrying on with his campaign but so far Hezbollah appears to have failed badly , specially since the majority of the Lebanese appear to side with him on this issue .

The Future Movement leader and former PM Saad Hariri , Lebanese Forces leader Samir Geagea, Progressive Socialist leader Walid Jumblatt and several other key political and religious leaders declared their support for Lebanon’s neutrality . So far only Hezbollah seems to be critical of Rai’s move while its allies have been giving mixed reactions.

Hezbollah first sent the Iranian ambassador to Patriarch Rai at his summer residence to convince the Patriarch of Iran’s capability to help Lebanon. Sensing no change in his resolve , Hezbollah sent PM Hassan Diab to visit the patriarch one day later and two days later it sent Aoun’s son- in-law MP Gebran Bassil to visit the Patriarch . All these actions strengthened patriarch Rai’s resolve and he vowed to continue with his neutrality campaign till the very end .

Today Hezbollah sent the key point man of the Lebanese government authorities , yes no other than Major General Abbas IBRAHIM , head of Lebanon’s Directorate of General Security (DGS), a key ally of Speaker Nabih Berri , who is allied with Hezbollah .

“Neutrality requires a consensual agreement among the entire Lebanese. God willing this will happen,” said Ibrahim after his meeting at Rai’s summer residence in al-Dimane.

Ibrahim denied that he carried any message from Hezbollah to Rai

But Hezbollah seems to be the only party opposed to neutrality . There is consensus among all the Lebanese except Hezbollah on this issue.

The question is who will Hezbollah send next to Rai ?

Will Hezbollah finally get the message that all the Lebanese want neutrality not only Patriarch Rai?

“Lebanon was open to all countries, east and west, except Israel which occupied our land. Lebanon was Switzerland of the east … Today, Lebanon has become isolated from the whole world. This is not our identity. Our identity is positive and constructive neutrality, not a warrior Lebanon,” the Patriarch was quoted as saying following his meeting with Aoun earlier this month .

Monday’s border incident with Israel is another strong proof that Rai is right .

Several analysts believe Hezbollah tried to repeat its 2006 act , when its fighters infiltrated into Israel on July 12 and kidnapped 2 soldiers but this time it failed , its fighters reportedly ran away and the party denied any involvement in the cross border fight ( even though no one else opened fire from the Lebanese side) . Neither president Aoun, nor Speaker Nabih Berri or PM Diab uttered a word as the clashes were going on in the south . All 3 top leaders are Hezbollah allies.

It appears from a tweet by the mother of a Hezbollah militant killed by Israel in Syria last week that Hezbollah was trying to avenge his killing by kidnapping Israeli soldiers .

-In a video mother of Ali Kamal Mohsin ( Hezbollah fighter who was killed in an Israeli airstrike in #Syria) is thanking Hassan Nasrallah for the “operation” today
–#Israel says it has foiled #Hezbollah attack
-Hezbollah denies that it has carried out any attack on Israeli forces pic.twitter.com/zB8H8ZaV3e

In 2006 war 1200 Lebanese were killed, mostly civilians ( and 158 Israelis mainly military) and over one million Lebanese from South Lebanon were displaced . During the last war Hezbollah was still relatively popular and for this reason the rest of the Lebanese took care of the displaced , but this time around it is a different story , There is a lot of anger at Hezbollah for its role in the regional conflicts and will be on its own if it goes into any war , which of course spells danger for its community .

Time for Hezbollah therefore to get the message that neutrality is what the Lebanese people want . The Lebanese want to live in peace and dignity , enough isolation and despair , Lebanon wants its friends back