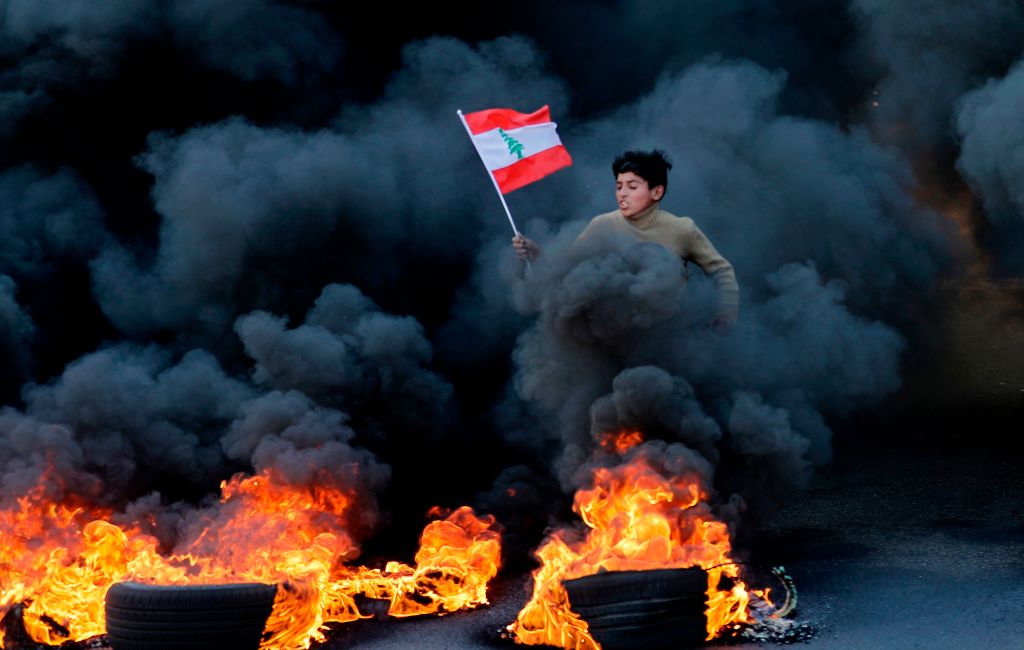 The famous Lebanese American writer, poet and visual artist Khalil Gibran (1883–1931) once reflectively wrote about his country of birth: ‘You have your Lebanon and its dilemma. I have my Lebanon and its beauty.’ While Lebanon remains a scenic and historical country, its current dilemmas would have deeply troubled Gibran.

Lebanon is in freefall politically, financially and economically. Its social and cultural vitality is in decline and its people are up in arms about where their homeland is heading. Its multi-faceted society wants serious reforms, but its state has proved to be divided, inept and bankrupt.

This is in contrast to the Lebanon which was once the envy of the Arab world as a stable economic powerhouse and beacon of liberty, where the rich and dissidents from the Arab world could find comfort in the 1950s and 1960s. Even after its devastation by the civil war of 1975–1990, fuelled by religious divisions and neighbourly interventions, Lebanon was able to bounce back and regain some of its vitality. Yet, it is today in a crisis that threatens its viability as an effectively functioning state.

Contrary to Gibran’s nostalgic description, Lebanon has had a mosaic and fragile existence ever since its emergence, along with that of Syria, as an independent state from the ashes of the French mandate that ended in 1943. While composed of various ethno-religious groups, it has functioned very much at the behest of intergroup elite consensus and under pressure from its neighbours. It consolidated as a state primarily on the grounds of a power-sharing agreement between its two main Christian and Muslim groups, based on a 1932 census that declared Christians to be the largest segment of the population, followed by Muslims, Druze and other minorities.

The arrangement spawned a political system that became known as consociational democracy, providing for proportional representation in the power structure. Initially, the system worked quite well, enabling Lebanon to develop as a fairly stable, vibrant and innovative country in the region for the next two decades. Meanwhile, Beirut managed to remain aloof from the Arab–Israeli conflict, to walk a tightrope in its relations with predatory Syria, and to avoid pursuing policies that could seriously endanger Lebanon’s mixed pro-Western and pro-Muslim Arab national identity. But this situation could not last for too long.

The consociational system lacked the necessary inner strength to weather the growing pressure from the Arab–Israeli conflict. When in fierce fighting the Jordanian army forced the Palestine Liberation Organization to move from Amman to Beirut in 1971, Lebanon became a pawn for competing regional actors (Syria and Israel, in particular), who backed different groups in the country for conflicting interests. The interplay between internal divisions and external interventions shifted Lebanon towards a devastating civil war.

Concurrently, the system lacked the necessary mechanism for accommodating demographic changes. Lebanon’s largely dispossessed Shias multiplied faster than other segments of the population, but that shift couldn’t be reflected in the power structure satisfactorily. In the wake of Ayatollah Ruhollah Khomeini’s success in transforming Iran into a Shia version of an Islamic republic in 1979, with an anti-Israeli and anti-US posture, the Lebanese Shias found a source of inspiration and assistance to set up their own Hezbollah organisation. Hezbollah rapidly grew to be a formidable political and paramilitary force in Lebanon, playing a critical role in the civil war, and challenging Israel and its supporters in a common cause with Tehran.

Although the civil war finally ended with the Taif Agreement of 1989 (under the auspices of Saudi Arabia), it essentially restored the consociational system without immunising it against the very variables that had caused its breakdown.

The same elites who had fought one another remained in charge of running the country, largely with an eye on extracting political and economic advantages for themselves rather than forging structural reforms to serve the common good and create national unity.

The Syrian conflict (including its refugee burden on Lebanon), and Israeli–Hezbollah and Iranian–Israeli animosity, as well as Iranian–Saudi rivalry, have contributed to Lebanon’s woes. Any political event, ranging from appointing a president or prime minister to regulating the power of Hezbollah, has required not only inter-elite consensus, but also outside actors’ endorsements. Poor governability, administrative dysfunction, corruption, embezzlement, nepotism and economic mismanagement have piled up to become the order of the day.

A new cross-religious and cross-ethnic generation of Lebanese has lately engaged in sustained protests for reform of the state and society. But despite promises made by the elites, nothing meaningful has transpired. The recently appointed technocrat Prime Minister Hassan Diab is facing an uphill battle in instituting reforms that could bail Lebanon out of its crisis on the one hand, and maintain the support of the powerful elites and their foreign backers on the other.

Lebanon’s problems are structural in a conflict-ridden region. To revitalise the country, not only do the country’s elites have to come together and respond effectively to public demands for fundamental change, but also outside actors need to halt their interferences that have fed Lebanon’s domestic fragility for so long. While not underestimating the ingenuity of the Lebanese people, it’s fair to say they have a hard road ahead.AUTHOR

Amin Saikal, an adjunct professor of social sciences at the University of Western Australia, is the author of Iran rising: The survival and future of the Islamic Republicand co-author with James Piscatori of Islam beyond borders: The umma in world politics. Image: Joseph Eid/AFP/Getty Images.