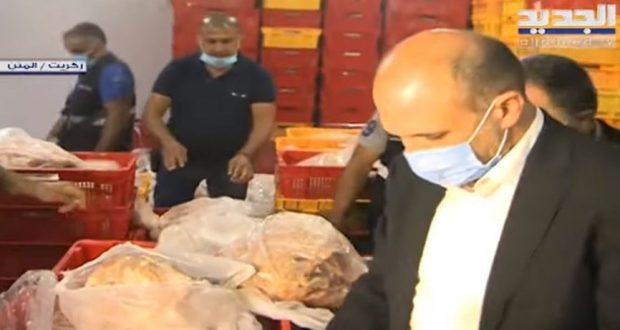 Dr. Hamad Hassan is shown inspecting expired chicken at a warehouse and processing plant in the town of Zakrit , in Metn region of Mount-Lebanon
Share:

A raid on 3 warehouses supplying local supermarkets with expired chicken dating back to 2016 outraged the Lebanese Health Minister : “This is real cancer “, he said adding this is an irresponsible and immoral act.

The Customs Control Division raided 3 warehouses for rotten chicken in the town of Zakrit which is located in the Metn region of Mount-Lebanon,, which dates back to 2016 and 2017, in the presence of the Minister of Public Health Dr. Hamad Hassan and a team from the ministries of Health and Economy.

Minister Hamad hailed the efforts of the Lebanese customs and said: “I contacted Badri Daher ( Customs Director) and thanked him for this great effort by the customs for raiding these plants and warehouses, which clearly exposed the inferior quality of the chickens and dates and all the counterfeiting tools available . Unfortunately people are losing lives because of this irresponsible and immoral act , and the perpetrator must be punished after completing all investigations.

He vowed to deal firmly with this issue because” it ruins human health and the safety of the country, ” he said

The chicken is reportedly being repacked or further processed into Chicken nuggets and patties with fresh dates.