“No to Gaza, no to Lebanon”, Protesters in Behbehan , Iran tell the regime 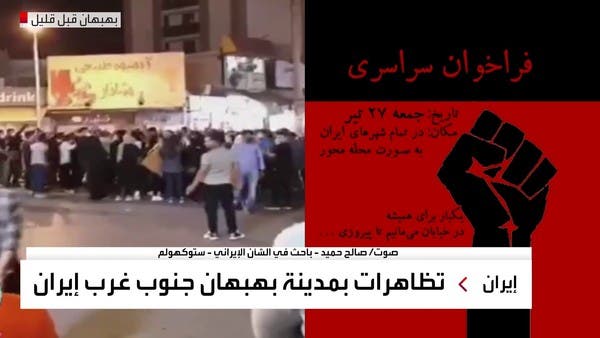 “We will stay on the streets until victory is won,” poster on the left shared on social media read. (Supplied)
Share:

Behbahan,, Iran – Anti-regime protesters in this southwestern Khuzestan city of Behbahan were chanting “No to Gaza, no to Lebanon, my life for Iran,” Al Arabiya reported late Thursday, citing local “witnesses.”

According to the media outlet Iranian security forces fired tear gas to disperse the protesters , “Heavy presence” of security forces has also been reported in other cities across the Islamic Republic.

According to London-based Middle East analyst Raman Ghavami, thousands gathered in the Khuzestan city of Behbahan, chanting slogans against Iranian involvement in other countries in the region amid the deepening economic crisis caused by the COVID-19 pandemic.

The demonstrators were heard shouting on a video posted by Ghavami on Twitter. “Down with the Islamic Republic!”

A series of explosions at Iranian nuclear sites and strategic infrastructure have rocked the Islamic Republic in recent weeks, first being reported in late June. Having gone on for three weeks, the blasts have claimed 21 lives as of Tuesday, according to Al Jazeera.

The explosions have been unofficially attributed to Israeli cyberattacks and covert strikes by US and Israeli forces. The Iranian regime has vowed to respond to the incidents, originally claiming they were accidents.

Large anti-government protests last erupted in Iran in early 2020, with hundreds of protesters demanding Supreme Leader Ayatollah Ali Khamenei step down after Tehran admitted its military had mistakenly shot down a Ukrainian plane, killing all 176 people on board.’

With the official death toll standing at 400 and unofficial claims ranging up to 1,000, the 2019 series of protests is believed to be the deadliest since the 1979 Islamic Revolution.Prior to the Thursday reports, Iran’s judiciary suggested Wednesday it might halt the executions of three men who allegedly took part in the November protest, BBC reported.

According to the media outlet, the detainees’ lawyers were told they could for the first time see the evidence and court paper against their clients following a social media campaign backed by celebrities.

According to the BBC, the Persian hashtag #do_not_execute was used over five million times over the last few days since the Islamic Republic’s Supreme Court announced on Tuesday the executions of the men were upheld.
Internet blockage observatory NetBlocks wrote on Twitter that it had seen some internet restrictions in place in oil-rich Khuzestan late on Thursday, Reuters reported.

Ahwazi Arabs are the largest community residing the  capital of Khuzestan province. According to Amnesty International, Ahwazi Arabs face discrimination by the authorities concerning politics, employment and cultural rights .There have been many arrests of Ahwazi Arabs. The province’s geographical location bordering Iraq and its oil resources also make it a politically sensitive region. While Khuzestan is the richest region in Iran, the Arab Ahwazi people are the poorest in the country.