As virus spreads, Bolsonaro ties with Brazilian military under strain 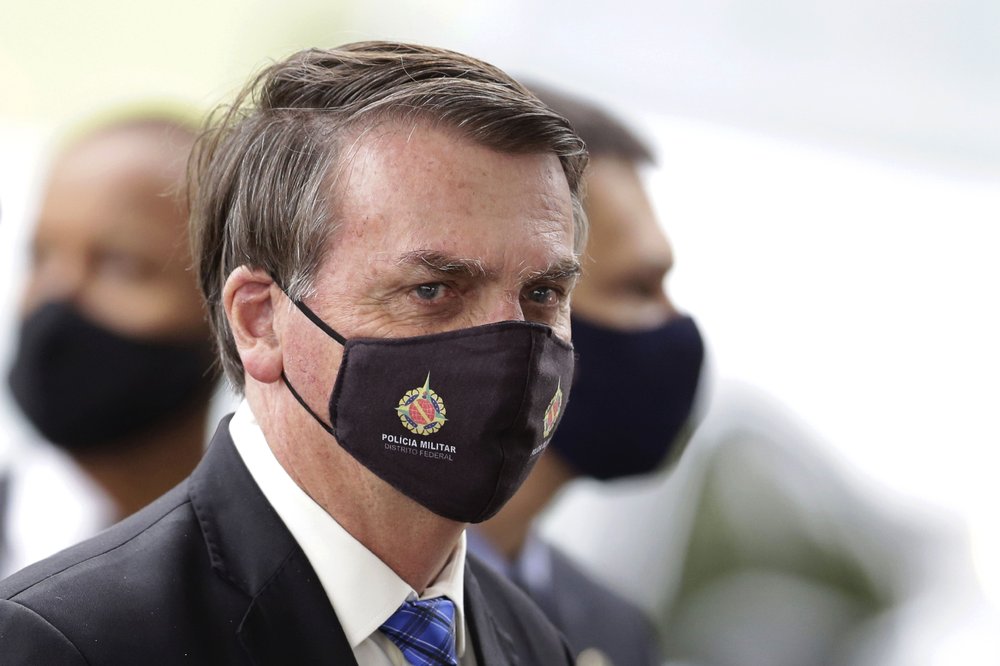 FILE – In this May 18, 2020, file photo, Brazilian President Jair Bolsonaro wears a mask due to the coronavirus pandemic as he talks with supporters upon departure from his official residence, Alvorada palace, in Brasilia, Brazil. The logo on the mask reads “Military Police. Federal District.” After 35 years of civilian-led democracy, Bolsonaro has created the most militarized Brazilian government since the fall of the country’s army-led dictatorship. (AP Photo/Eraldo Peres, File)
Share:

SAO PAULO (AP) — After 35 years of civilian-led democracy, President Jair Bolsonaro has created the most militarized Brazilian government since the fall of the country’s dictatorship.

Packing his Cabinet with retired and active-duty generals and giving more than 3,000 government jobs to soldiers, Bolsonaro has prompted criticism from political opponents that he is co-opting the prestige of the Brazilian military in order to erode democratic institutions.

In recent weeks, however, influential figures in military spheres have begun a pushback against his use of the armed forces. A series of high-ranking retired officers, who historically give voice to the views of active-duty leaders, have begun expressing concern about Bolsonaro’s governance and heavy reliance on the military. Experts see those statements as a way of undermining any presidential schemes to unconstitutionally assert his dominance over other branches of government.

The statements have come as Brazil is swamped by the coronavirus, which Bolsonaro has consistently downplayed as a threat as he undermined shutdowns and other preventive measures. Bolsonaro, himself a former army captain, said last week that he had contracted the virus and was taking unproven malaria medication to fight it.

Both Bolsonaro’s handling of the outbreak and his own illness have been seen as embarrassing by high-ranking military leaders. The actions have weakened his relationship with the armed forces, experts and former military officials said.

It also prompted an attack from Supreme Court Justice Gilmar Mendes, who has a history of dialogue with the high command. He said Saturday the army has associated itself with genocide during the COVID-19 pandemic. In response, Bolsonaro’s defense minister, Gen. Fernando Azevedo, said in a statement Monday that the armed forces are fully engaged in trying to preserve lives, and he asked the country’s top prosecutor to investigate Mendes’ comments.

Two retired generals who served as Bolsonaro’s ministers told The Associated Press this month that the administration lacks leadership and organization, and can’t rely exclusively on the military to succeed.

Brazil traditionally has allowed the armed forces to temporarily loan service members of all ranks to work in civilian jobs for limited periods. Officers and troops who want to serve longer terms come under pressure to retire from the military first, although they generally retain close ties to serving members.

Retired Gen. Carlos Alberto Santos Cruz was Bolsonaro’s government secretary, but quit after six months over a rift in communications strategy. He spent 47 years in the army and commanded U.N. peacekeeping force in Haiti (2007-2009) and in the Democratic Republic of the Congo (2013-2015).

He said high-ranking military officers were becoming uncomfortable with Bolsonaro’s blending of the military with his civilian administration.

“It is not good to have such a strong (military) representation. It is better society be represented in a diverse manner,” he said. “That may be intentional to transfer the armed forces’ prestige to the administration. But it is not for lack of technocrats elsewhere.”

Bolsonaro has frequently bristled at rulings from the independent judiciary, and his biggest objection came after the Supreme Court blocked his pick to head the federal police April 29. He joined supporters who protested the court’s action in the capital of Brasilia and called on the military to assume a greater role. One activist group launched fireworks in the court’s direction.

Bolsonaro told supporters May 3 at the presidential palace that he had the military’s backing.

The next day, the defense minister published a rare statement saying the armed forces believe the independence of government branches is “essential for the country’s governability.″

Retired Gen. Maynard Santa Rosa, who was Bolsonaro’s strategic affairs minister for nine months, said the military will avoid drawing closer to him, but officers won’t leave the Cabinet unless there is a major scandal like the corruption cases that have marred previous administrations.

“Then there is the possibility of a step back,” Santa Rosa said.

An active-duty air force brigadier, who spoke on condition of anonymity because he wasn’t authorized to talk to the press, said many military officials agree with Bolsonaro’s criticism of the Supreme Court, but the high command won’t support any authoritarian moves such as openly disobeying its rulings.

He added that top leaders of the armed forces are pressuring active-duty appointees to retire so the military isn’t confused with the administration.

“It is clear that those (military ministers) in the Bolsonaro administration are in a difficult position,” Aldo Rebelo, a civilian former defense minister, said in an interview. “They have to accept a president who threatens other branches of government, who attends protests in front of the army headquarters. It is not a comfortable position.”

The president’s press office told the AP it would not respond to questions about the military’s role in government nor about critiques of former officers.

Brazil’s military mostly kept out of politics since the end of the dictatorship in 1985, focusing on border control, security operations and logistics in remote areas.

Now, almost half of the Cabinet is comprised of former military officers, many of whom left the armed forces to work for Bolsonaro.

On Thursday, Azevedo tried to dispel fears of a de facto military government, saying none of the other ministers speak for the high command despite their long careers in the armed forces.

“There is no one else,” Azevedo said in a live broadcast.

Bolsonaro has doled out hundreds of other lower government jobs to military personnel, with many aimed at controlling Amazon deforestation in order to shield the country from environmental criticism

Bolsonaro also looked to Gen. Eduardo Pazuello, an army logistics expert with no health experience before April, to lead Brazil’s fight against the coronavirus.

The president ordered the army to mass produce the anti-malarial drug, chloroquine, which hasn’t proven to be effective against the coronvavirus. Pazuello, who remains interim health minister almost two months on, distributed more than 4 million pills nationwide.

The virus has killed more than 70,000 people in Brazil, most of them on the general’s watch.

Carlos Melo, a political science professor at Insper University in Sao Paulo, said the military has increasingly shown its discomfort with the president’s actions and poor management of the health crisis.

Even before Bolsonaro caught the coronavirus, the commander of the army’s COVID-19 center refused to shake the president’s hand during a meeting broadcast live, instead offering his elbow. Four others, including two generals, subsequently did the same.

“It is an embarrassment for them that the president caught the virus,” Melo said. “Bolsonaro doesn’t follow rules, which are dear to military leaders who see this crisis as the challenge of their generation.”