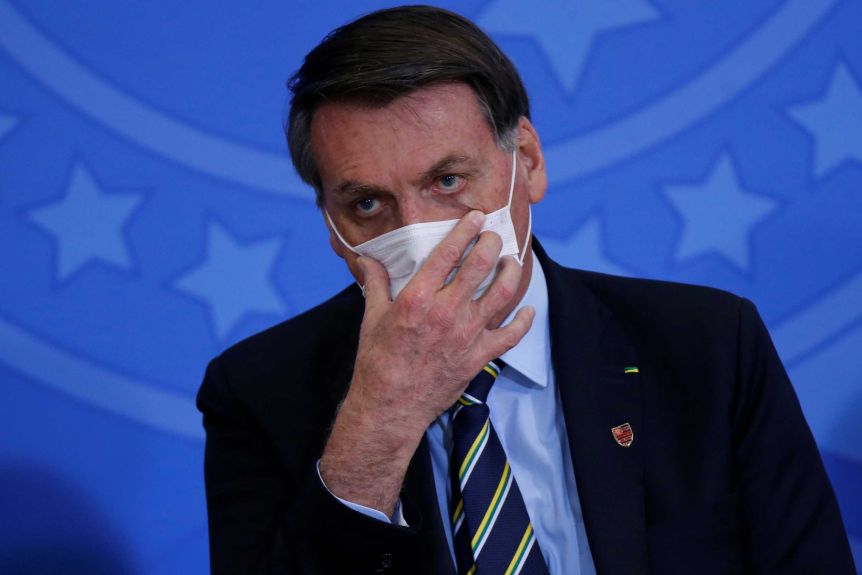 He took the test, his fourth, on Monday after developing symptoms, including a high temperature.

Mr Bolsonaro has repeatedly played down risks of what he has called the “little flu”, saying he would not be seriously affected. He has opposed lockdowns, which he says hurt the economy.

Brazil has the second-highest number of Covid-19 cases and deaths in the world, after the US.

What did Mr Bolsonaro say?

He made the announcement in a TV interview on Tuesday, saying the fever he had been experiencing had gone down and that he felt “very well”.

Mr Bolsonaro said that he had started experiencing symptoms on Sunday. He said he had had a high temperature, a cough and had felt unwell.

He added that on Monday he had felt worse, which prompted him to take the coronavirus test.

Mr Bolsonaro is in a higher-risk group because of his age, 65.

He said he was taking hydroxychloroquine – championed by US President Donald Trump – and azithromycin, an antibiotic, to treat the illness. Neither has been proven to be effective against the virus

Contact tracing and tests will be carried out for the people Mr Bolsonaro has met recently.

His previous three tests for the virus all came back negative.

The executive director of the World Health Organization, Dr Mike Ryan, wished President Bolsonaro “a speedy and full recovery from this disease”, adding: “I think the message to us all is: we are vulnerable to this virus.”

What had he previously said?

Back in April, Mr Bolsonaro said that even if infected, he would “not have to worry as I wouldn’t feel anything, at most it would be like a little flu or a little cold”.

Despite this, President Bolsonaro has argued that regional lockdowns are having a more damaging effect than the virus itself, and accused the media of spreading panic and paranoia.

His other comments on the virus include:

He has since continued to rail against measures that he deems “dictatorial” such as the closing beaches or requirements to wear face coverings.

On Monday, he made further changes to a law that would require Brazilians to wear masks in public.

He has attended a number of public events without a mask, even when local rules required him to wear one.

On Sunday, Foreign Minister Ernesto Araújo posted a photo on social media showing himself with President Bolsonaro and others attending an Independence Day celebration at the US embassy in Brasilia.

None of those in the photo is wearing a mask or observing social distancing.

The ambassador had earlier tweeted a picture of himself with President Bolsonaro.

An irony that has not been missed

For so long, Jair Bolsonaro has tried to brush off this virus – the irony that he has now caught it has not been missed in Brazil.

His detractors – of which he has many – have weighed in, calling this karma – that Jair Bolsonaro invited this to happen.

There was even a column in one of the biggest newspapers, Folha de São Paulo, entitled “Why I’m Cheering for Bolsonaro to Die” – this is how divided, how toxic the political picture is here in Brazil as the pandemic takes hold.

But the fact is, Bolsonaro joins the nearly 1.7 million Brazilians who’ve contracted Covid-19. They’re scary numbers and Brazil is a country in trouble, where coronavirus is spreading fast.

Will Jair Bolsonaro get away with mild symptoms and carry on downplaying it? Or change tack now the virus has hit home? Whatever happens, with the man at the top suffering from Covid-19, it symbolises the crisis this country is in.

What is the state of Covid-19 in Brazil?

Infections in Brazil and Latin America as a whole took a while to take hold but then started to rise, initially for Brazil in its Amazonas region but then more starkly in Rio de Janeiro and São Paulo.

Brazil became only the second country to pass one million cases on 20 June and has continued to rise, passing 1.5 million. Many experts believe deficiencies in testing mean the overall figures for cases and deaths could be considerably higher.

Nevertheless lockdowns began to be lifted in many areas even as the cases surged. Both Rio and São Paulo have reopened bars and restaurants in the past week.

Two health ministers – both doctors – have left their posts after disagreements with the president.

One ray of hope though is Brazil’s renowned expertise in vaccines. Two major vaccine tests, in partnership with AstraZeneca and Sinovac, are to begin final phase testing on thousands of Brazilian volunteers.