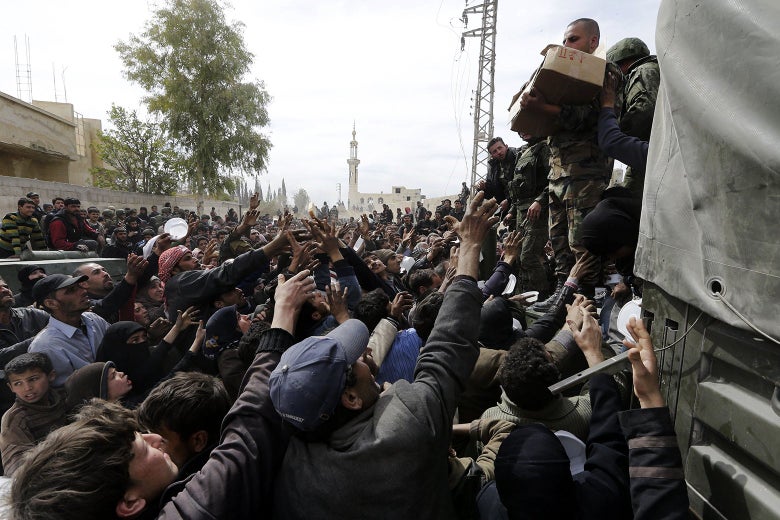 File photo of starving Syrians in East Ghouta , a suburb of Damascus. A staggering 9.3 million Syrians are now going to sleep hungry
Share:

Leading aid groups called Monday for increased access and funding for millions of Syrians at risk of starvation, on the eve of a key conference in Brussels.

More than nine years into the conflict, the fighting has receded but the humanitarian emergency remains acute, the international NGOs said in a joint statement.

“A staggering 9.3 million Syrians are now going to sleep hungry and more than another two million are at risk of a similar fate,” they said.

The statement — signed by the Norwegian Refugee Council, Oxfam, CARE, Mercy Corps and others — said the number of Syrians facing food insecurity has risen by 42 percent since last year.

“Almost a decade of war has thrown Syrians into a spiral of despair and destitution that keeps worsening every year. International assistance is needed now more than ever,” the aid groups said.

The Brussels IV conference hosted by the European Union and United Nations opens on Tuesday to assist war-affected people inside and outside Syria.

“Unless funding and humanitarian access are increased, many Syrians, including those living as refugees in the region, will be pushed to the brink of starvation,” the aid groups said.

The war in Syria has killed more than 380,000 people and displaced nearly half of the country’s pre-war population since it started in 2011.