Caesar Act: US sanctions against Iran’s partners are a statement of intent 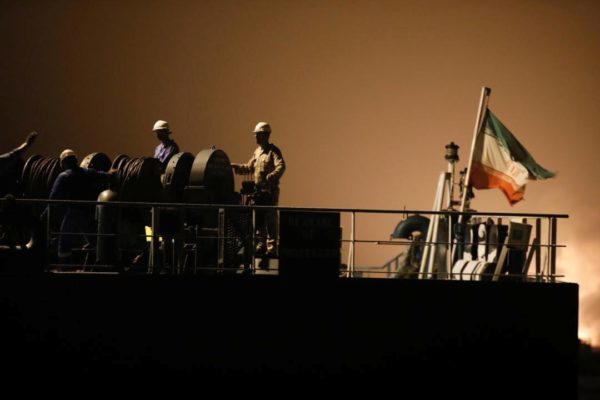 Crew of the Iranian tanker ship “Fortune” are seen at the deck during the arrival at El Palito refinery in Puerto Cabello, Venezuela. Reuters
Share:

The scope and scale of American sanctions against the Iranian regime evidently run wide and deep. They extend themselves from faraway Venezuela to nearby Syria via Lebanon. They also target such specific figures as Venezuelan President Nicolas Maduro, Syrian President Bashar Al Assad and Hassan Nasrallah, who heads the Lebanese militia group Hezbollah; common to all these figures is, of course, their errant behaviour on the global stage and a refusal to play by international rules.

In oil-rich Venezuela, the Russians and Chinese weighed their options against Washington’s clampdown on Caracas’s ability to sell them its crude – through a sanctions regime that left petroleum companies petrified – and decided to leave. When Iran stepped into the breach, it too faced the Trump administration’s music: when Caracas began trading its gold in exchange for refined fuel transported to the beleaguered South American country in Iranian tankers, the US imposed sanctions on 125 of those tankers and blocked the only route available, thereby triggering an economic collapse in Venezuela.

Last week, the Syrian regime was slapped with the Caesar Act, a piece of US legislation that seeks to curb the ability of Mr Al Assad, his family members and associates to continue profiting from the ongoing civil war and getting away with their crimes against humanity. Washington’s goal may not be to topple the regime but force it to drive out its Iranian backers currently operating within its borders and agree to a power-sharing agreement with the opposition.

Meanwhile in crisis-hit Lebanon, where Hezbollah has a stake in government, it appears that Nasrallah has a plan ostensibly to save his country from economic collapse by ending the “dollarisation” of its economy. It is a pipe dream – one that is predicated on the idea of Beirut bartering with Tehran using the national currency – and could effectively turn Lebanon into another Venezuela, which pursued a “gold for oil” arrangement with Iran. He has also pledged to keep Lebanon’s border with Syria open and help Damascus in any way Hezbollah can.

It is worth noting that Nasrallah has struck a defiant note from a position of considerable weakness, having been set back by sanctions put in place against Hezbollah and its patrons in Tehran.

At least that is how Brian Hook, the US Special Representative for Iran, sees it, based on my conversation with him at the Beirut Institute seventh e-policy circle last week. Mr Hook has accused Nasrallah of “shedding crocodile tears” for the Lebanese people, who have been feeling the economic pinch for the past few months, thanks in large part to gross mismanagement by its government. “Hezbollah has undercut the security, prosperity and welfare of the Lebanese people – in the same way that the Iranian regime has done that for the Iranian people,” he added.

To be sure, the situation in Lebanon is more complicated.

The people there have long been accustomed to blaming others for their problems, with many of them living either in selfish apathy or in the shadow of their sectarian leaders. A case in point is the uprising that began last October with much promise before the people allowed it to be co-opted by partisan elements across political and ideological divides. As a result, the country continues to be riddled with the same old economic and governance problems, with little appetite on the part of the ruling elite to implement much-needed reforms.

Of course, Hezbollah is a significant piece in that puzzle. And if one were to take Mr Hook at his word, this will not be the last that Nasrallah – or for that matter Mr Al Assad and the regime in Tehran – have heard from the Trump administration.

“The US is going to withhold reconstruction assistance for Syria until all forces under Iranian command and control leave the country,” he said. “Iran has got to get out of Syria and I see increased incentives for both [Russia] and [Mr Al] Assad to at some point have Iran exit.”

In other words, Washington aims to pressure Moscow, which is allied to Damascus, to break away from Tehran – or possibly face sanctions of its own, including the blacklisting of its businesses under the Caesar Act. Mr Hook described the US move so far as a statement of its intent to bring change. “People should understand that if we are willing to target and designate [Mr Al] Assad, then no one who is involved in these atrocities [in Syria] should feel safe,” he said.

It is therefore important for the Lebanese and Syrian people, and their leaders, to understand that the Caesar Act is a tool that the US is determined to use with the purpose of holding wrongdoers accountable – much the same way Venezuela is being dealt with.

Circling back to Caracas, its relationship with Tehran has come under scrutiny. But Elliott Abrams, the US Special Representative for Venezuela, told me that it is the larger impact of the Maduro government’s actions that concerns him more. Predicting that Iran would eventually stop shipping fuel to Venezuela, Mr Abrams said: “We’ll see if they have enough tankers actually to [continue] this [arrangement].”https://players.brightcove.net/pages/v1/index.html?accountId=5367332862001&playerId=default&videoId=5994992614001&mode=iframe

He compared the situation pertaining to refugees and displaced people in Syria with that of Venezuela. “The Maduro dictatorship has created five million migrants and refugees, and this burden is a very heavy one for Latin America, South America, and particularly in the Caribbean,” he pointed out. “It’s the largest refugee crisis in the history of Latin America. By the end of this year, it will be larger than the Syrian refugee crisis.”

According to Mr Abrams, the unfortunate situations prevalent in both countries are the outcome of “human action by corrupt, venal, brutal rulers”. And that the Trump administration has determined that the only solution is that “those rulers must go”.