Concern in Venezuela , Turkey over possible extradition of Saab to US 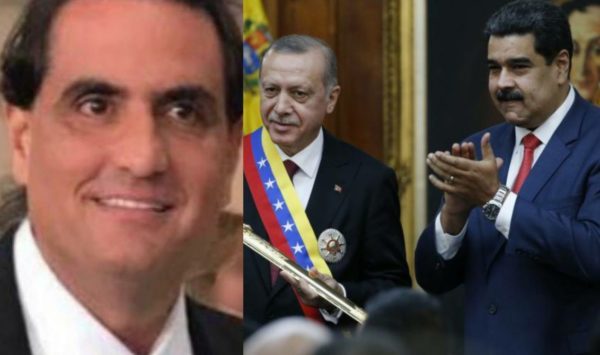 Colombian citizen of Lebanese descent Álex Naín Saab Morán ( also known as Ali Hassan Rachid , age 48, was arrested in the African nation of Cape Verde while on his way to the Islamic Republic of Iran to negotiate deals after being accused of money laundering. As the front man for Venezuelan President Nicolas Maduro Saab’s extradition is causing concern to several nations, including Venezuela , Turkey , Iran and its Lebanese proxy Hezbollah .

In Venezuela and Turkey there is concern that Saab could end up in a U.S. court as he is a relevant figure because of his many secrets and suspected money laundering operations linked to the Venezuelan regime and the economic relationship between Caracas and Ankara through alleged fake companies based in Istanbul .

Saab’s name surfaced in the media when former Venezuelan prosecutor Luisa Ortega accused him in 2017 of being one of Maduro’s front men. Saab was linked to several companies, including Group Grand Limited (GGL), accused of supplying Maduro’s regime with overpriced food and provisions for the Local Supply and Production Committees (CLAP) established by Maduro’s government.

In July 2019, US government sources indicated that, thanks to the CLAPs, which are provided to the poorest, Saab and three of Maduro’s stepchildren, apparently made “hundreds of millions of dollars”. In addition, charges were also brought last July against Saab and his right-hand man and business partner , Álvaro Enrique Pulido, reportedly for laundering up to $350 million they allegedly defrauded through the exchange control system in Venezuela.

According to the United States, between November 2011 and September 2015, Saab and Pulido participated in a plot to launder their illicit profits and transfer them from the Latin American country to U.S. bank accounts, thus giving Washington jurisdiction over the case.

Saab was arrested at the Amilcar Cabral de Sal International Airport (the largest in Cape Verde) in response to a request by the United States through an Interpol red alert for the aforementioned money-laundering offences.

Saab was traveling in a private plane that requested permission to land on the island of Sal in order to refuel. «This is relevant, because it is someone with diplomatic status, who was on a mission to serve and whose plane stopped in Cape Verde just to refuel. This is the key piece in the whole process. It was not enough to invoke Interpol’s red alert for arrest. There are other interests at stake that are being analyzed by the defense“, argued the lawyer.

Saab’s arrest is causing concern at the highest levels in Venezuela, because of this alleged link with financial operations linked to the Maduro administration, and also in Turkey. Saab has been key to the economic relationship between Caracas and Ankara in recent years . Through the mechanism called ‘gold for food’ it mobilized hundreds of millions of dollars.

Saab obviously possesses critical information about Venezuelan leaders and for this reason Maduro has been increasing the pressure to avoid extradition to the United States. He issued a statement last Saturday to demand Saab’s release, indicating that the Colombian businessman has Venezuelan nationality and that he was traveling as an “agent” of his government.

Turkey could also be trying to prevent him from being extradited to the U.S. courts since Saab since he has also allegedly played a key role in building Venezuela’s economic relationship with Turkey through his shell companies located in Istanbul, according to Ahval News.

Ahval also reported that the two regimes “have established a so-called gold-for-food mechanism.” Since 2018, Venezuelan gold has been shipped to Turkey for refinement, with some $900 million’s worth of gold shipped first year.

In return, Turkey became a major supplier of consumer staples such as pasta, sunflower oil, wheat flour, red lentils, and powdered milk for Venezuela, which is suffering from a serious shortage of supplies and a deep economic crisis.