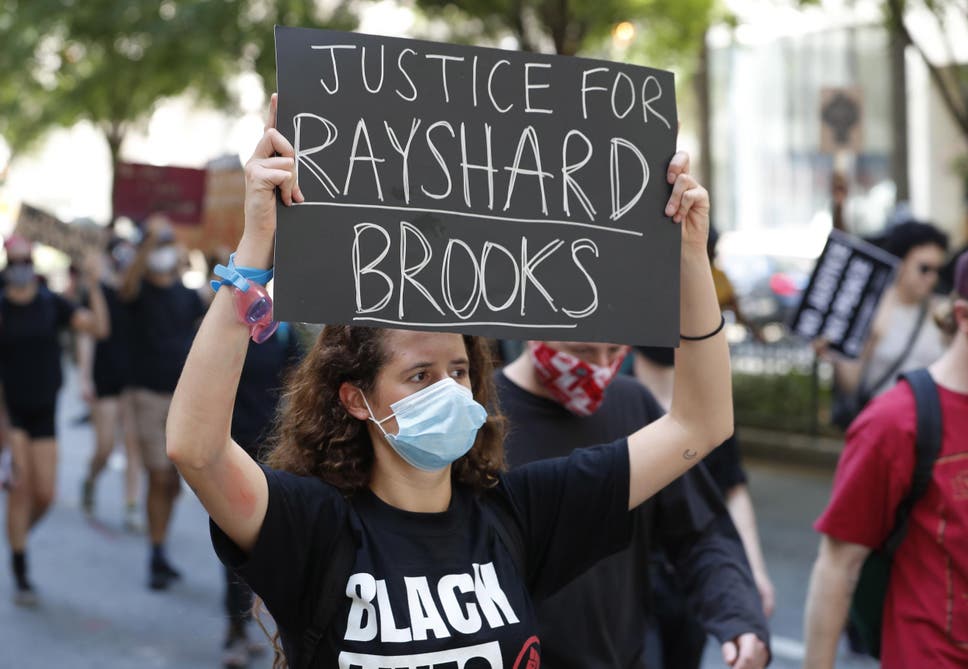 Atlanta’s police chief resigned Saturday, the day after an officer fatally shot a Black man in a Wendy’s parking lot, prompting protesters to later block a freeway as the restaurant burned.

Mayor Keisha Lance Bottoms said Chief Erika Shields, a member of the Atlanta Police Department for more than two decades, stepped down and former Assistant Chief Rodney Bryant will serve as interim chief “as we immediately launch a national search for new leadership.”

“Chief Shields has offered to immediately step aside as police chief so that the city may move forward with urgency in rebuilding the trust desperately needed in our communities,” Bottoms said.

Shields said after the announcement that “it is time for the city to move forward.”

“Out of a deep and abiding love for this City and this department, I offered to step aside as police chief,” she said in a statement. “I have faith in the Mayor, and it is time for the city to move forward and build trust between law enforcement and the communities they serve.”

The Georgia NAACP had called for Bottoms to relieve Shields of duty.

Rayshard Brooks, 27, was killed Saturday night after two police officers responded to a report of a man sleeping in the drive-thru, forcing customers to go around his vehicle, according to the Georgia Bureau of Investigation, which is investigating the shooting.

Lawyers for Brooks family said he was the father of three daughters and a stepson and worked in a tortilleria.

Authorities said he failed a field sobriety test administered at the Wendy’s and that he had been under investigation by Atlanta police for a suspected DUI in the incident.

As police attempted to arrest Brooks, he resisted and a struggle ensued, according to the GBI.https://www.nbcnews.com/news/embedded-video/mmvo84998725671

“During the course of that confrontation, Mr. Brooks was able to secure from one of the Atlanta officers, his Taser,” Reynolds said.

The incident was captured on video and shows Brooks appearing to run from the officers with the Taser in his hand, Reynolds said.

After running a short distance, Brooks “turns around and it appears to the eye that he points the Taser at the Atlanta officer,” the director said.

“At that point, the Atlanta officer reaches down and retrieves his weapon from his holster, discharges it, strikes Mr. Brooks there on the parking lot, and he goes down.”

Reynolds said a witness was able to corroborate the information.

Brooks was taken to a hospital where he died after undergoing surgery.

“Of extreme concern in the murder of Rayshard Brooks is the fact that he was shot in the back multiple times while fleeing,” said attorneys L. Chris Stewart and Justin Miller, who are representing the Brooks family, in a statement.

Stewart, an Atlanta-based civil rights attorney and member of the legal team representing the mother of Ahmaud Arbery, 25, who was fatally shot in February while jogging in Georgia, said Brooks should not have faced deadly force because he only appeared to have a Taser.

“They went and picked up their shell casings,” he said. “I wonder why.”

Miller, referring to the May 25 death of George Floyd in the custody of Minneapolis police, lamented that another police killing of a Black man is drawing national attention.

“We’re not asking for protesters not to go out and protest,” he said. “We need to keep pushing.”

On Saturday night, demonstrators blocked Interstate 75 in Atlanta, and a fire erupted at the Wendy’s.

The officers involved in the shooting have been removed from duty pending the outcome of the investigation, according to WXIA. Their names have not been released.

Fulton County District Attorney Paul L. Howard Jr. said in a statement Saturday that the GBI will turn over its findings to his department, but that his office has already launched its own “intense, independent investigation of the matter.”

“Lastly, our thoughts and our sympathies are extended to the family of Rayshard Brooks as we must not forget that this investigation is centered upon a loss of life.”

In cellphone video posted on social media by people who said they were at the scene, Brooks appears to be on the ground struggling with two officers before getting up and running away.

One of the officers appears to use a stun gun while running after Brooks. Moments later, gunshots can be heard.

Reynolds said the agency will digitally enhance video taken at the scene and plans to release it to the public later on Saturday.

“We want everyone to see what we have seen in this case. And that’s why, again, I would ask for some patience. I don’t want anyone, in any circumstances, to rush to any form of judgment.,” he said.

A crowd of people gathered at the scene to peacefully protest the shooting on Saturday.

“The body cam footage and all surveillance video from surrounding buildings need to be released immediately,” the Georgia NAACP tweeted Saturday. “@Atlanta_Police has had a culture of excessive use of force. Now #RayshardBrooks is dead. We demand immediate accountability.”

This is the 48th officer-involved shooting in 2020 that the GBI has been asked to investigate, the agency told NBC News.

Stewart said Brooks’ daughters are 1, 2, and 8 years old. No age was given for his stepson.