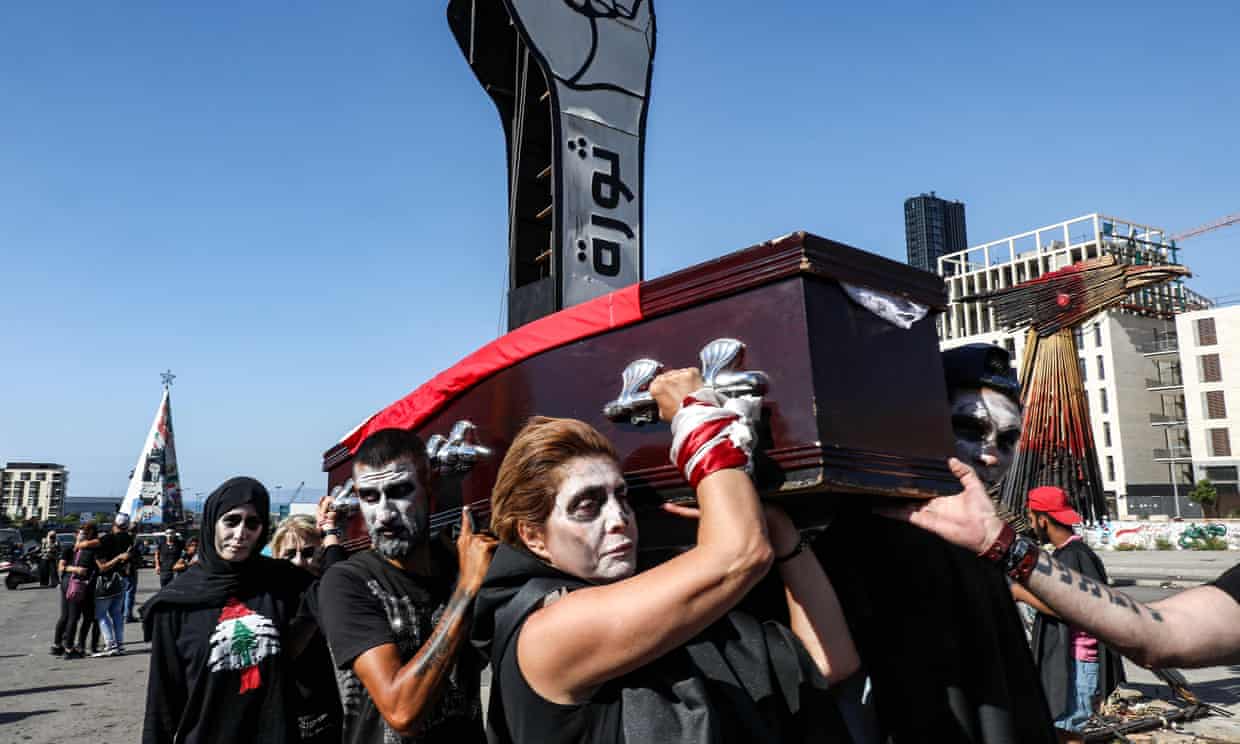 Hundreds of demonstrators angered by a deepening economic crisis rallied across Lebanon for a third consecutive day on Saturday, after violent overnight riots sparked condemnation from the political elite.

Protesting against the surging cost of living and the government’s apparent impotence in the face of Lebanon’s worst economic turmoil since the 1975-1990 civil war, protesters in central Beirut brandished flags and chanted anti-government slogans.

“We are here to demand the formation of a new transitional government and early parliamentary elections,” Nehmat Badreddine, an activist and demonstrator, told AFP near the Grand Serail seat of government.

In the northern city of Tripoli, young men scuffled with security forces, who fired rubber bullets to disperse crowds.

The clashes there left more than 120 people injured, according to figures released by the Red Cross and local medical services.

The stand-off began after young men blocked a highway to prevent a number of trucks carrying produce destined for Syria from passing through, according to the official National News Agency.

The World Food Programme issued a statement to say that it had sent a convoy of 39 truckloads of food aid to Syria, which has suffered a knock-on effect from Lebanon’s financial crisis that has driven protests against the regime of Bashar al-Assad.

Food in Syria is more expensive than at any other time during the country’s nine-year conflict, triggering scenes reminiscent of the Arab spring protests of 2011 on the streets of the nominally government-loyal town of Sweida last week. New US sanctions against the Assad regime come into force next week that could be potentially devastating.

Lebanon’s prime minister, Hassan Diab, condemned Friday night’s violence and what he termed efforts to mount a “coup” against the government and manipulate the value of the Lebanese pound.

“The state and the people are being subjected to blackmail,” he said, vowing to defeat corruption in the country.

Lebanon is caught in a spiralling economic crisis, including a rapid devaluation of the Lebanese pound, which has triggered a fresh wave of demonstrations since Thursday.

Local media said the exchange rate had tumbled to 6,000 Lebanese pounds to the dollar on the black market at one point Friday, compared to the official peg of 1,507 in place since 1997.

In Martyrs’ Square in Beirut on Saturday, demonstrators dressed in black and with their faces whitened carried a coffin draped with the Lebanese flag in a symbolic funeral for their crisis-ridden country.Advertisement

President Michel Aoun has announced that the central bank will implement measures from Monday including “feeding dollars into the market”, in a bid to support the Lebanese pound.

Despite the pledges, some 200 young men gathered on mopeds in central Beirut on Friday night, some of them defacing shop fronts and setting fire to stores.

Security forces fired tear gas to disperse them and some of the young men threw stones and firecrackers.

People also took to the streets in the cities of Saida and Kfar Roummane, in the south, to denounce the economic crisis.

Lebanon – one of the most indebted countries in the world, with a sovereign debt of more than 170% of GDP – went into default in March. Unemployment has soared to 35% nationwide.

It started talks with the International Monetary Fund last month in a bid to unlock billions of dollars in financial aid. Dialogue is ongoing.

The country enforced a lockdown in mid-March to stem the spread of the novel coronavirus, dealing a further blow to businesses.