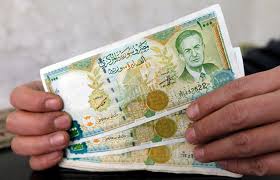 1000 Syrian pounds banknote was worth over $20 US dollars when the civil war started in 2011 and now it it is worth less than 50 cents and continues to fall
Share:

Syria’s pound hit record lows on the black market Saturday trading at over 2,300 to the dollar, less than a third of its official value, traders said, ahead of new US sanctions.

Three traders in Damascus told AFP by phone that the dollar bought more than 2,300 Syrian pounds for the first time, though the official exchange rate remained fixed at around 700 pounds to the greenback.

After nine years of war, Syria is in the thick of an economic crisis compounded by a coronavirus lockdown and a dollar liquidity crunch in neighbouring Lebanon.

Last month, the central bank warned it would clamp down on currency “manipulators”.

Analysts said concerns over the June 17 implementation of the US Caesar Act, which aims to sanction foreign persons who assist the Syrian government or help in post-war reconstruction, also contributed to the de fact devaluation.

Zaki Mehchy, a senior consulting fellow at Chatham House, said foreign companies — including from regime ally Russia — were already opting not to take any risks.

With money transactions requiring two to three weeks to implement, “today’s transactions will be paid after June 17”, he said.

Heiko Wimmen, Syria project director at the conflict tracker Crisis Group, said that with the act coming into force, “doing business with Syria will become even more difficult and risky”.

Both analysts said the fall from grace of top business tycoon Rami Makhlouf despite being a cousin of the president was also affecting confidence.

“The Makhlouf saga is spooking the rich,” Wimmen said.

After the Damascus government froze assets of the head of the country’s largest mobile phone operator and slapped a travel ban on him, the wealthy feel “nobody is safe”, he said.

They are thinking “you better get your assets and perhaps yourself out preparing for further shakedowns”, he said.

Mehchy said the impact of the pound’s decline and ensuing price hikes on Syrians would be “catastrophic”.

Most of Syria’s population lives in poverty, according to the United Nations, and food prices have doubled over the past year.

“Families may be forced to cut the quality and quantity of food they buy.”