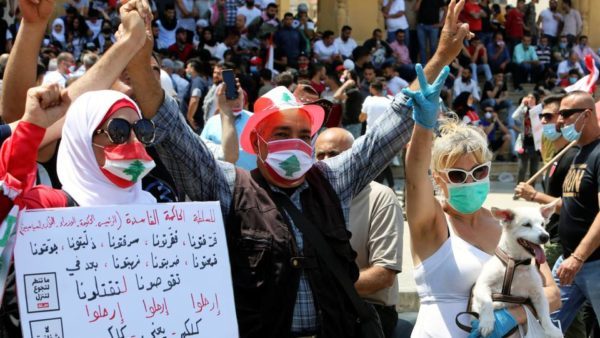 Demonstrators gesture during a protest against the government performance and worsening economic conditions, in Beirut, Lebanon, June 6, 2020. (Reuters)
Share:

Protesters blocked roads in Beirut’s Corniche al-Mazraa and Qasqas areas, in the cities of Sidon and Tripoli and on the coastal highway that links Beirut to the South.

Heavy gunfire was also heard in Beirut’s Tariq al-Jedideh area as videos of gunmen shooting in the air circulated on social media. The National News Agency said two people were wounded in the area — one lightly and one in the eye.

The insults were condemned by Sunni and Shiite religious leaderships as well as political parties.

Dar al-Fatwa, the country’s highest Sunni religious authority, warned all Muslims against “falling into the trap of sectarian strife.”

“The cursing of Sayyida Aisha can only come from an ignorant person who should be enlightened,” Dar al-Fatwa said in a statement.

The head of the Higher Islamic Shiite Council Sheikh Abdul Amir Qabalan for his part warned of “suspicious attempts to stir sectarian strife” and condemned the insults against the Prophet’s wife.

Shiite mufti Sheikh Ahmed Qabalan meanwhile urged authorities to protect the country and its people and slammed those whom he called “mercenaries and agents” who are trying to “ignite national and sectarian strife.”

“The insults and chants that were voiced by some individuals are rejected and condemned and do not at all reflect the moral and religious values of the faithful Muslims,” Hezbollah said in a statement.

It also strongly cautioned against “those who stir strife, those who benefit from it and all those promoting it and calling for it.”

Hariri for his part urged supporters and residents to heed Dar al-Fatwa’s warning against sectarian strife and noted that Shiite religious and political leaders have also condemned the insults against the Prophet’s wife.

The insults were reportedly hurled during or after the confrontations in downtown Beirut on Saturday between protesters and counter-demonstrators.

Earlier, an anti-government rally in central Beirut turned violent as clashes erupted between the protesters and followers of Hezbollah.

A security official on the scene told dpa that some anti-government protesters were chanting anti-Hezbollah arms slogans when a group from the Hezbollah area of Handak al-Ghamik started throwing stones at them.

“Shiite! Shiite!” the Hezbollah followers chanted as they tried to break down a security barrier the army had set up to separate the two sides.

“No one is allowed to chant against Hezbollah,” one Hezbollah follower was quoted as telling reporters.

The rally was expected to be Lebanon’s largest since the government enforced a lockdown to curb the spread of the novel coronavirus and banned public gatherings in March.

Saturday’s protest organisers said their action was aimed at fighting rampant corruption in the country and to prod the government, installed earlier this year, to tackle the ailing economy.

In the run-up to the rally, some protesters took to social media to demand the disarming of Hezbollah, which wields a powerful influence over Lebanon’s politics.

Prime Minister Hassan Diab, whose government is mainly backed by Hezbollah and its allies , on Thursday warned protesters against blocking roads or resorting to vandalism.

According to Wikipedia the Shi’ite  view of Aisha is generally unfavorable. They do not believe that she conducted herself in an appropriate manner in her role as Prophet Muhammad’s wife. Several prominent Shiite accounts even report that she, along with Hafsa, brought about Muhammad’s death by giving him poison. Shi’ites also consider Aisha to be a controversial figure because of her political involvement during her lifetime. Aisha was the daughter of Abu Bakr the first Muslim caliphate . Aisha also played an active role in Muhammad’s political life; she was known to accompany him to wars, where she learned military skills, such as initiating pre-war negotiations between combatants, conducting battles, and ending wars.

Sunnis  on the other hand assert that because Aisha is the wife of Muhammad, criticizing her is tantamount to criticizing him.

Shi’tes also reject the idea that Aisha was Prophet Muhammad’s favorite wife  and believe that Muhammad favored none of his wives.