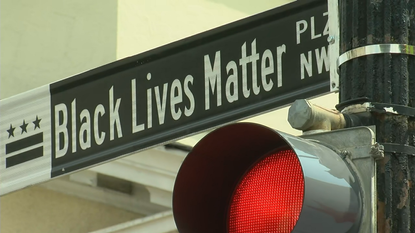 WASHINGTON , DC — Mayor Muriel Bowser on Friday said she wants President Donald Trump to remove “all extraordinary federal law enforcement and military presence” from the city as protests over the death of George Floyd continued.

“The deployment of federal law enforcement personnel and equipment are inflaming demonstrators and adding to the grievances of those who, by and large, are peacefully protesting for change and reforms to the racist and broken systems that are killing Black Americans,” Bowser explained in a letter to Trump.

“Furthermore, I continue to be concerned that unidentified federal personnel patrolling the streets of Washington, D.C. pose both safety and national security risks,” the Democratic mayor added.

Bowser’s letter comes as the message “Black Lives Matter” was painted in giant yellow letters down 16th Street in Washington, the site of many demonstrations.

Trump fired back in a pair of tweets Friday afternoon, calling the Democratic mayor “incompetent” with a budget that is “totally out of control.”

″[Mayor Bowser] is constantly coming back to us for “handouts”, is now fighting with the National Guard, who saved her from great embarrassment over the last number of nights. If she doesn’t treat these men and women well, then we’ll bring in a different group of men and women!,” the president tweeted.

Like cities across the nation, the U.S. capital has been rocked by a week of protests against police brutality following the death of George Floyd, a black Minneapolis man who died after a white police officer knelt on his neck.

On Tuesday evening, the Pentagon confirmed that approximately 1,600 active-duty troops from Fort Bragg in North Carolina and Fort Drum in New York were flown into the Washington area, as the nation braced for another day of protests.

The troops, who are “postured” on military bases near the District of Columbia, have so far not taken part in any support to “civil authority operations,” the Pentagon said in a statement Tuesday night.

There are approximately 41,500 National Guardsmen activated across 33 states and the District of Columbia to assist state and local law enforcement in civil unrest operations.

On Wednesday, Defense Secretary Mark Esper told reporters at the Pentagon that while he ordered the deployment of 1,600 troops to the region, he does not support invoking the Insurrection Act. That law would allow President Donald Trump to send the active-duty military to respond to civil unrest in cities across the country.

The Pentagon then said it was going to send home some of the active-duty troops.

Hours later, following a meeting at the White House and reports that Trump was upset with Esper, an Army spokesperson told NBC News that Esper had changed his mind again and would not be sending troops home.

A day later, Esper reversed his decision and ordered several hundred troops from the 82nd Airborne Division to return home to Fort Bragg in North Carolina.