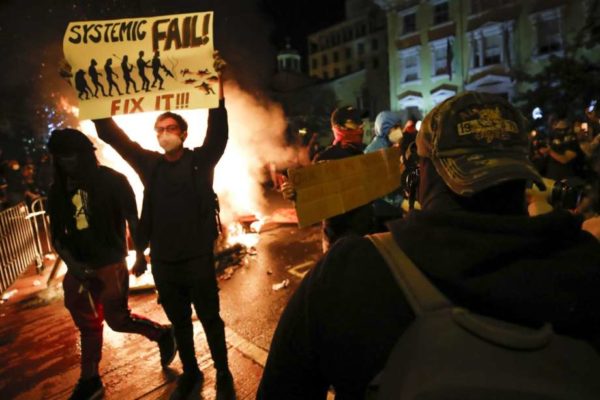 Demonstrators protest the death of George Floyd, Sunday, May 31, 2020, near the White House in Washington. Floyd died after being restrained by Minneapolis police officers
Share:

Beijing’s state media has claimed that the US has crumbled into a ‘failed state’ amid the ongoing rallies across America and blasted Donald Trump as ‘a racist president’.

Global Times, a major Chinese propaganda tabloid, slammed President Trump as ‘weak, irresponsible and incompetent’ and accused American politicians of blaming China for the protests erupting in the US.

The US has been rocked by seven straight nights of tumult since George Floyd, a black man, was killed in Minneapolis after white police officer Derek Chauvin pinned him to the ground by kneeling on his neck last Monday.

Floyd, who was in handcuffs at the time, died after Chauvin ignored bystander shouts to get off him and Floyd’s cries that he couldn’t breathe.

His death, captured on citizen video, has sparked days of protests in Minneapolis that quickly spread to cities across America.

While many of the demonstrations around the country have been peaceful, others have descended into violence – despite curfews in many cities and the deployment of thousands of National Guard members over the past week.

President Donald Trump on Monday threatened to threaten to call in the military, inflaming tensions further.

In an article published Monday, the Chinese state newspaper claimed that the riots exposed the US ‘a failed state’ ruled by ‘a racist president’.

‘As more and more netizens question “whether this is how US President Donald Trump makes America great again,” observers see a weak, irresponsible and incompetent leadership navigating the country into a completely opposite direction, with all-out efforts to deflect public attention from its own failure,’ the tabloid wrote.

It added: ‘The protests exposed long-standing issues in the US, including racial inequality, discrimination and a polarized society, which have been amplified under the Trump administration.’

The nationalistic outlet claimed that American politicians are shifting blame to China over the mass demonstrations on the US streets.

The newspaper said: ‘As the world watches the US being confronted with massive riots, looting, chaos and heightened violence, US officials, instead of reflecting on the systematic problems in their society that led to such a crisis, have returned to their old ‘blame game’ against left-wingers, ‘fake news’ media and ‘external forces.’

‘More Americans have slammed the US president for inciting hatred and racism, and US officials, who turn a blind eye to the deep-seated issues in American society, including racial injustice, economic woes and the coronavirus pandemic, began shifting the blame to the former US president, extremists, and China for inflaming the social unrests.

Hu wrote: ‘When riot breaks out in the US, they want to use all means necessary, and cannot stand the loss of order for even one more day. What they are facing are merely unorganized protesters.

‘If this was organized subversion, what would they do? Will they drop an atomic bomb?

Beijing has long been infuriated by criticism from Western capitals, especially Washington D.C., over its handling of the pro-democracy protests that shook Hong Kong last year.

As unrest erupting across the US, Chinese media circulated video clips suggesting Hong Kong police were ‘restrained’ compared to actions seen in the U.S.

Beijing sparked outrage and concern earlier this month with a plan to impose a law on Hong Kong that it said was needed to protect national security and curb ‘terrorism.’

Pro-democracy activists and Western nations condemned the move as another attempt to chip away at the city’s unique freedoms.

Following President Donald Trump’s announcement that he would strip Hong Kong of its special privileges, a commentary published Sunday in China Daily – a mouthpiece of the ruling Communist Party – said U.S. politicians dreamed of ‘victimizing’ China.

‘Better give up that dream and come back to reality,’ it said.

‘Violence is spreading across the US… US politicians should do their jobs and help solve problems in the US, instead of trying to create new problems and troubles in other countries.’

The back-and-forth over Hong Kong has exacerbated U.S.-China tensions, which were already high over a number of issues – including trade and the coronavirus pandemic, over which Trump has accused Beijing of a lack of transparency.

As violence broke out in the U.S. over the weekend, Chinese foreign ministry spokeswoman Hua Chunying also took aim at Washington.

‘I can’t breathe,’ she said on Twitter, with a screenshot of a tweet by U.S. State Department spokeswoman Morgan Ortagus that had criticised the Chinese government over its Hong Kong policy.

Hua was quoting the words George Floyd was heard saying repeatedly before his death – after a police officer knelt on his neck for nearly nine minutes – which sparked the current unrest in the United States.

Over the weekend, Chinese media also circulated video clips of the U.S. violence, accompanied by the hashtag ‘How restrained are the Hong Kong police’ on the Twitter-like platform Weibo.

One clip posted by the People’s Daily on Sunday compared the recent on-screen arrest of CNN correspondent Omar Jimenez, who was covering the unrest in the U.S. city of Minneapolis last Friday, with scenes of Hong Kong police appearing to back away from media personnel in the city last year.