In a sad week for America, Trump has fled from his duty 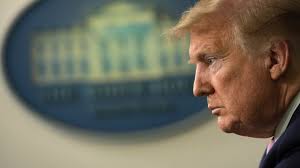 This past week has brought tragedy upon tragedy to our nation: the death toll from Covid-19 passed a grim milestone of 100,000 deaths; the brutal killing of George Floyd ignited mass protests in Minneapolis and beyond, and seven people were shot in protests demanding justice in Louisville.

But our President was mostly busy with other things: getting into a public fight with Twitter, condemning China over Hong Kong and terminating our relationship with the World Health Organization — an entity that once looked to the United States as the world’s leading institution in fighting pandemics.

President Donald Trump also took time, of course, to send out a stream of new, controversial tweets. He called protesters in Minneapolis “thugs” and repeated a racist line from a Miami police chief years ago, “When the looting starts, the shooting starts.” He even retweeted a video in which a supporter says, “The only good Democrat is a dead Democrat.”

But other than a brief tweet in the midst of another storm, Trump remained silent on the most sensitive issue of his presidency: the pandemic that is killing so many older Americans and people of color living near the edge. Understandably, with the rash of other news, the press is moving on. But we should pause for one more moment to recognize how sad and sharp a departure his silence is from past traditions of the presidency.

Since the early days of the Republic until now, Americans have looked to our presidents to provide protection, meaning and comfort, especially in moments of crisis. After George Washington was sworn as commander in chief of the Continental Army, Ethan Allen’s younger brother, Levi, wrote to Washington in 1776 that he had become “Our political Father and head of a Great People.” Shortly thereafter, Washington was frequently referred to as “Father of Our Country.” As he steered us through war, the constitutional convention, and two terms as President, the phrase caught on. He wasn’t much of a speaker — he thought his deeds spoke for him — but he was a leader of such strong character and rock-solid integrity that he became the gold standard of the presidency.

Lincoln began his presidency during great uncertainty about his leadership. He won the election of 1860 with the smallest plurality ever (39%), and his military experience was virtually nil. But over time, he kindled a special relationship with Union soldiers, many of whom called him “Father Abraham.” Historians say his homespun ways, common manner and kindly empathy converted them. In his re-election, soldiers were his greatest supporters.

Franklin Roosevelt was known to be self-involved in his early years, but his struggles with polio transformed him into a caring, compassionate leader. Working families and many people of color thought they had a friend in the White House. So attached did his followers become that when he gave a fireside chat on a summer evening, you could walk down the streets of Baltimore and hear every word as families sat in their living room by a radio.

Historians generally agree that Washington, Lincoln and FDR were our greatest presidents. All three are remembered for their empathy and steadfastness in caring for the lives of average Americans. They continue to set the standard.

In contemporary times, it is harder for any president to sustain deep ties with a majority of Americans. We are too sharply divided as a people, and the internet often brings out the worst in us. Even so, several of our recent presidents have found moments when they can unify us and make us feel that at the end of the day, we are indeed one people. In many cases, these moments have come to define their presidencies: Ask any American adult and they can generally remember one, two or even three occasions in which recent presidents connected with us emotionally, stirring our hearts.

I remember with absolute clarity the Challenger disaster in 1986. One saw the plumes of the rising space craft against a bright blue sky — and then that horrific explosion as it instantly disappeared. Ronald Reagan was one of the few presidents in our history who expressed our emotions so well in a moment of shock and mourning. For hour upon hour, the networks had replayed the explosion, and it seemed so meaningless. But then Reagan used his speech to replace that picture in our minds with a different one: the astronauts waving goodbye. They became our heroes, especially as Reagan (drawing upon speechwriter Peggy Noonan) closed with lines from a World War II poem: “We will never forget them, nor the last time we saw them, this morning, as they prepared for their journey and waved goodbye and ‘slipped the surly bonds of earth’ to ‘touch the face of God.'”

One thinks, too, of Bill Clinton traveling to Oklahoma City after the bombing there of a federal building in 1995. Clinton, like Reagan, was at his best when he captured tangled emotions and gave meaning to deaths of some of our finest citizens. He not only consoled families in private but moved the nation when he mourned them publicly. As I recall, that’s when presidents were first called “Mourners in Chief” — a phrase that has been applied repeatedly to presidents since. (Not coincidentally, Clinton’s speech of mourning in Oklahoma City is widely credited with resurrecting his presidency, then in the doldrums.)

One remembers, too, George W. Bush standing on the top of a crushed police car in the rubble of the World Trade Center bombing. When a first responder said he couldn’t hear the President, Bush responded through his bullhorn: “I can hear you. The rest of the world hears you. And the people who knocked these buildings down will hear all of us soon.”

One also remembers Barack Obama flying again and again to speak at gravesites where young children or church parishioners were being buried, victims gunned down in a gun-obsessed nation. Thinking about the mass shooting at Emanuel African Methodist Church in Charleston, one’s mind returns to the image of the President of the United States leading a memorial service, singing “Amazing Grace.”

Reagan, Clinton, Bush, Obama — two Republicans, two Democrats — served as our “Mourners in Chief.” All four bound us together for a few moments, and we remembered who we are and who we can be.Why has our current “Mourner in Chief” gone AWOL? God knows.  But his flight from responsibility is yet another sadness among this week’s tragic losses.

*David Gergen has been a White House adviser to four presidents and is a senior political analyst at CNN. A graduate of Harvard Law School, he is a professor of public service at the Harvard Kennedy School, where he founded the Center for Public Leadership. Tune in CNN Sunday at noon ET for WE REMEMBER, a memorial service for those lost during the Covid-19 pandemic, hosted by Jake Tapper. The opinions expressed in this commentary are his own.