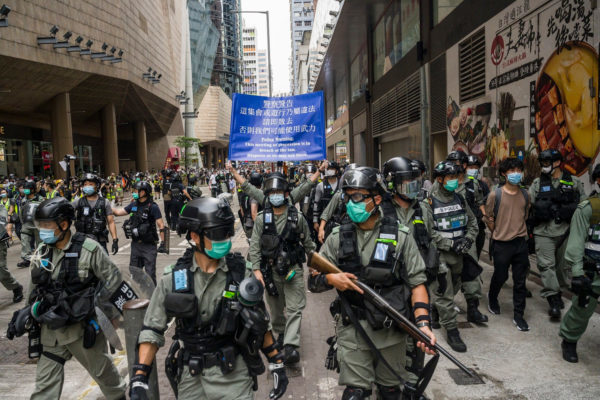 HONG KONG, CHINA – MAY 27: Riot police stand guard during a protest against a planned national security law at Admiralty district on May 27, 2020 in Hong Kong, China. Chinese Premier Li Keqiang said on Friday during the National People’s Congress that Beijing would establish a sound legal system and enforcement mechanism for safeguarding national security in Hong Kong.(Photo by Billy H.C. Kwok/Getty Images)
Share:

U.S. President Donald Trump said on Friday he was directing his administration to begin the process of eliminating special treatment for Hong Kong, in response to China’s plans to impose new security legislation in the territory.

Trump made the announcement at a White House news conference, saying China had broken its word over Hong Kong’s autonomy. He said its move against Hong Kong was a tragedy for the people of Hong Kong, China and the world.

“We will take action to revoke Hong Kong’s preferential treatment,” he said, adding that the United States would also impose sanctions on individuals seen as responsible for smothering Hong Kong’s autonomy.

Trump’s move follows Chinese plans to impose new national security legislation on the former British colony. Secretary of State Mike Pompeo has said the territory no longer warrants special treatment under U.S. law that has enabled it to remain a global financial center.

Trump said he was directing his administration to begin the process of eliminating policy agreements on Hong Kong, ranging from extradition treatment to export controls.

He said he would also issue a proclamation on Friday to better safeguard vital university research by suspending the entry of foreign nationals from China identified as potential security risks.

Sources, including a current U.S. official, told Reuters on Thursday that the latter move, which had been expected, could impact 3,000 to 5,000 Chinese graduate students.