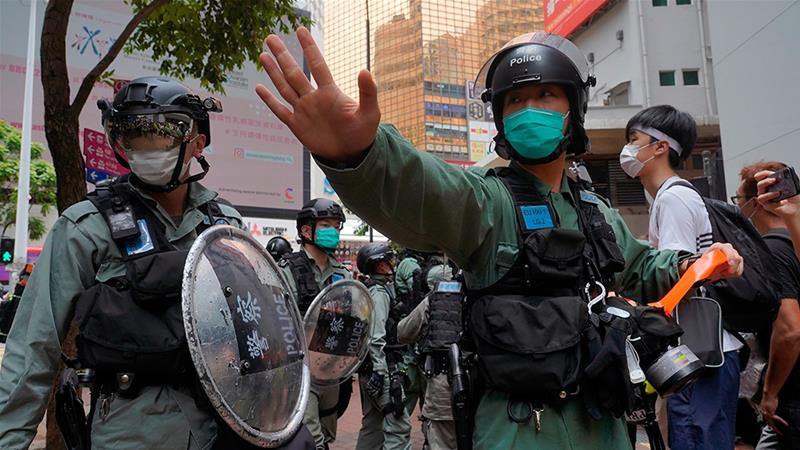 Riot police have been trying to control protesters in Hong Kong who have returned to the streets this week during debate on a bill that would criminalise abuse of the Chinese national anthem as Beijing prepares to impose a new security law on the territory [May 27, 2020: Vincent Yu/The Associated Press]
Share:

By Tara John and Lauren

Such a move could make it easier for those residents to one day apply for UK citizenship.

The offer would apply only to Hong Kongers who possess a document known as the British National Overseas (BNO) passport, which was granted to residents who registered for it prior to Britain handing Hong Kong back to China in 1997.

More than 314,000 BNO holders reside in the semi-autonomous territory, according to the Home Office.

Their status currently entitles them to seek consular assistance from the UK, but is not equivalent to British citizenship.

On Thursday, Britain’s Home Office Secretary, Priti Patel, said she and the Foreign Secretary Dominic Raab were exploring ways to provide more rights for BNO passport holders, including extending a “path to citizenship.”

“Deeply concerned at China’s proposals for legislation related to national security in Hong Kong,” Patel wrote on Twitter. “If imposed, @DominicRaab & I will explore options for a path to citizenship for BNO passport holders. UK will continue to defend the rights & freedoms of the people of Hong Kong.”

It followed an announcement by Raab earlier on Thursday in which he told the British press that greater visa rights were in the cards for BNO passport holders.

“In relation to BNO passport holders, as you know, currently they only have the right to come to the UK for six months. If China continues down this path and implements this national security legislation, we will change that status,” he said.

“We will remove that six-month limit and allow those BNO passport holders to come to the UK and to apply to work and study for extendable periods of 12 months and that will itself provide a pathway to future citizenship,” he added.

The offer has been welcomed by a broad range of Conservative lawmakers and the opposition Labour Party. Lisa Nandy, shadow foreign secretary, called it “an important first step in fulfilling our longstanding obligation to the people of Hong Kong,” in a statement. She added that it reflected “the seriousness of the threat posed by China’s approval of new national security legislation earlier today.”

It is an unexpected move from the British government, which has been vowing to end the free movement of European citizens and introduce a new points-based immigration system.

China’s proposed national security law has been met with protests in Hong Kong and criticism internationally. Observers warn that it could curtail many of the fundamental civil liberties guaranteed in the transition from British to Chinese rule.

Once the law has been drafted, it will implemented upon promulgation by the Hong Kong government, bypassing the city’s legislature via a rarely-enacted constitutional backdoor.

In a video shared on Twitter, UK’s Foreign Secretary Raab urged China to “step back from the brink and to live up to its international obligations.

“China’s move to assert greater control in Hong Kong has also mounted tensions between Beijing and Washington. Following protests in the city Wednesday in which around 300 people were arrested, US Secretary of State Mike Pompeo denounced the law as a “disastrous decision” and “the latest in a series of actions that fundamentally undermine Hong Kong’s autonomy and freedoms.”

He added that the country would no longer consider the global financial hub as autonomous from China for trade and economic purposes.