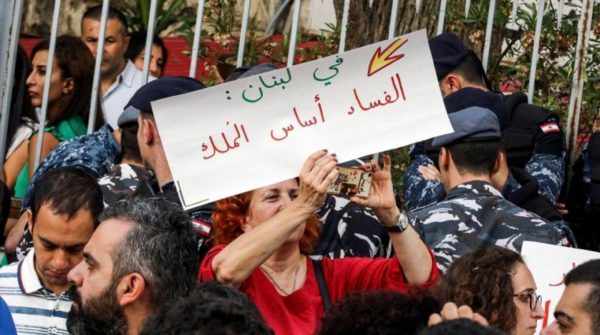 A Lebanese woman holds up a sign reading in Arabic ‘in Lebanon, corruption is the basis of rule’, during a protest outside the Justice Palace in Beirut on November 6, 2019. (AFP)
Share:

LONDON – Emerging market investors are no strangers to sovereign debt crises, but few have been as perilous as the one facing Lebanon given a toxic combination of financial and political weaknesses and no obvious economic platform on which to build a recovery.

Since defaulting for the first time on its foreign currency debt in March, Lebanon has formed a rescue plan and started negotiations with the International Monetary Fund on $10 billion of aid, both moves that would normally be read as positive for a country mired in debt.

But the country’s $31 billion of sovereign dollar-bonds have generally rallied only a few cents in the last two months and are languishing at around 17 cents in the dollar. This is much lower than bonds of Argentina and Ecuador, two other distressed names in the throes of overhauling their debt and far below the average recovery value from emerging markets sovereign defaults at 69 cents.

Lebanon may be looking at a recovery value of only a third of that level, analysts said, citing references in the rescue plan of “significant” expected losses for foreign holders of Eurobonds.

One emerging markets veteran said he hadn’t seen a country face such dire straits in his lifetime.

“Its nothing like Ecuador or Argentina,” said the creditor, who holds a small amount of the paper. “Lebanon will take a very long time to resolve. It faces four different crises: balance of payments crisis, debt crisis, bank crisis, political crisis and all are linked.”

For years, Lebanon’s economy was sustained through overseas diaspora capital funnelled from the banks to fund a government beset by state waste, corruption and bad governance. But that system collapsed when the flow of money dried up and anti-government protesters took to the streets in October last year, leaving the state facing a gaping balance of payments hole, a debt-to-GDP ratio of 176% and a $20.6 billion wipe out in banks’ shareholder capital.

And while consensus gradually appears to be building between banks, which are among the state’s biggest creditors, and the government on a rescue plan, concerns linger about the appetite of a government dominated by sectarian power-brokers and former warlords to push through painful reforms expected to be demanded by the IMF.

Another foreign creditor highlighted what they saw as a discrepancy in the plan related to future balance of payments financing requirements, seemingly indicating the government was not facing up to the scale of the challenge.

Lebanon’s bonds were valued at 14 cents in the dollar at an auction last month to determine the payout on credit default swaps (CDS), tools used to price the risk of a default by a borrower. That was lower than many other sovereign CDS auctions in recent years, including troubled Venezuela which priced at 24.5 cents in December 2017. With little sign of progress on the debt restructuring there, those bonds have sagged to less than 10 cents.

Lebanon’s CDS auction should not be relied upon as an infallible guide to eventual debt restructuring levels, Bank of America said in a research note. Though given that the government’s rescue plan included a nominal face-value cut to Eurobonds of 75%, recovery values would be below 20 cents, the bank added.

“Keeping to the very low coupon rate they (the government)talked of and keeping it as a bullet bond for now… the weaker exchange rate would bring the base case recovery down to somewhere in the low 20s,” said Nick Eisinger, principal, fixed income emerging markets at Vanguard, which holds a small amount of Lebanese debt.

Lebanon’s restructuring comes at a time of heightened stress in emerging markets in the wake of the devastation left by COVID-19.

Also hit by the oil price plunge, Ecuador last month struck a deal with the holders of nearly $20 billion in sovereign bonds to delay interest payments, while Zambia applied for financial help from the IMF and picked French company Lazard Freres to advise it on its debt. Sri Lanka is also under strain.

Opportunities elsewhere and Lebanon’s particular challenges means some fund managers, including distressed debt traders, who might normally eye a bargain at this level have so far been reluctant to step in.

The volume of trading of the Eurobonds surged to $3.9 billion in March, but fell back by more than two-thirds of that amount in April and further still in May after it engaged with the IMF and drew up a rescue plan, MarketAxess data shows.

Allianz Global Investors was looking more at emerging markets with a strong oil sector or export base that might be facing temporary issues, said Giulia Pellegrini, senior portfolio manager at Allianz. Lebanon has neither.

“Its a more complex story and that’s why people have been taking it with a pinch of salt instead of being more excited as you’re trading around the 20 area and there’s room for higher recovery values if you think about the average EM experience,” she said.

Ashmore Group , one of the largest holders of the foreign debt, has declined to comment on Lebanon. But it has previously suggested there was potential for higher recovery when sovereign debt was trading at such distressed levels, particularly as some governments might be worried about being cut adrift from debt capital markets in future.