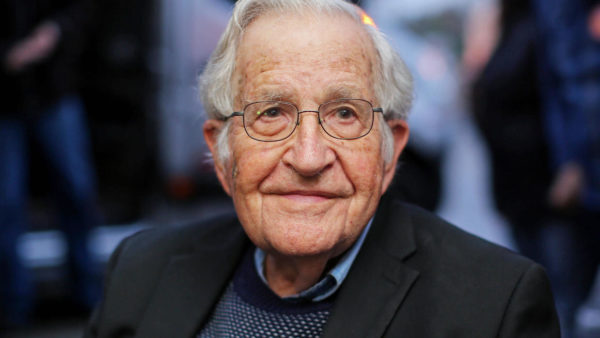 For two months the influential scholar Noam Chomsky has been confined in Tucson with his Brazilian wife Valeria, his dog and a parrot who can say “sovereignty” in Portuguese Heuler Andrey AFP/File
Share:

The United States is on a chaotic path with no federal plan against the coronavirus pandemic as it reduces public health funding and ignores the advances of climate change, according to activist scholar Noam Chomsky, considered the founder of modern linguistics.

What follows are extracts, edited for clarity, from an AFP interview with the 91-year-old leftist intellectual, who has authored more than 100 books and is currently a professor at the University of Arizona.

For two months he’s been confined in Tucson with his Brazilian wife Valeria, his dog and a parrot who can say “sovereignty” in Portuguese.

Question: How do you read the current situation in the United States, where coronavirus has killed more residents than any other nation in the world?

Answer: There’s no coherent leadership. It’s chaotic. The presidency, the White House, is in the hands of a sociopathic megalomaniac who’s interested in nothing but his own power, electoral prospects — doesn’t care what happens to the country, the world.

The president himself has said that it’s none of his business. He’s said that the federal government can’t do anything.

Nothing really matters except his personal power and gain. Of course he has to maintain the support of his primary constituency, which is great wealth and corporate power.

There’s 90,000 deaths and there will be a lot more…. There’s no coordinated plan.

Q: How do you view the political landscape emerging from this crisis in the US and elsewhere?

A: As soon as Trump came in, his first move was to dismantle the entire pandemic prevention machinery. At the start, defunding the Center for Disease Control, which would deal with this. And canceling programs that were working with Chinese scientists to identify potential viruses. So the US was singularly unprepared.

It’s a privatized society, very wealthy, with enormous advantages — far more than any other country — but it’s in the stranglehold of private control.

Europe in many ways is worse, because the austerity programs just amplify the danger, because of the severe attack on democracy in Europe, the shifting decisions to Brussels…. So Europe has its own problems, but at least it has the residue of some kind of social democratic structure, which provides some support, which is what I think is lacking in the US.

As severe as this pandemic is, it’s not the worst problem. There will be recovery from the pandemic at severe cost … but there isn’t going to be any recovery from the melting of the polar ice caps and the rising of sea levels and the other deleterious effects of global warming.

Q: Several countries are using technology to track citizens, storing DNA to fight the virus. Are we entering a new era of digital surveillance, and what does this mean for privacy?

A: There are now companies developing technology which make it possible for the employer … to look at what’s on your computer screen and to check your keystrokes and if you get up and walk away for a minute, they’ll send you a warning.

That’s being installed right now…. It’s not the future.

The so-called Internet of Things is coming along. It’s convenient. It means if you’re driving home you can turn on the stove — but it also means that that information is going to Google and Facebook, to the government, the American government, the French government, it’s an enormous amount of potential control ,surveillance and invasion. But this has happened. It’s not the future.

If we allow the huge tech companies, the state, to control our life that’s what will happen. They’ll turn it into something like China, where you have social credit systems and in some cities you get a certain amount of credits, there’s face recognition technology all over the place and everything you do gets monitored.

If you cross the street in the wrong place, you can … lose some credits, and so on.

It’s not inevitable, just like global warming, that it’s going to happen — unless people stop it.

Q: Could it be justified to halt the virus’ spread?

A. It might be — during the period of threat. There’s controls needed during wartime, you have rationing. But it doesn’t have to be permanent…. ‘Yes, we’ll let you have this authority now, but it can be revoked at any time.'”