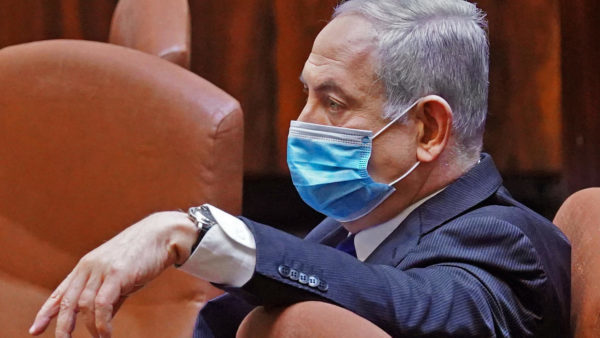 Israeli Prime Minister Benjamin Netanyahu is due in court on corruption charges on May 24, days after he formed a new government after more than a year of political crisis involving three inconclusive elections Adina Valman KNESSET SPOKESPERSON OFFICE/AFP
Share:

Israeli Prime Minister Benjamin Netanyahu’s lawyers asked a Jerusalem court on Tuesday for their client to be exempted from attending the start of his impending corruption trial.

The request from Netanyahu’s legal team, seen by AFP, comes after the justice ministry objected to the veteran premier missing his first hearing on May 24.

Netanyahu’s presence in the court requires five bodyguards, his lawyers wrote, meaning the hearing would not be able to take place “within the limitations set by the health ministry due to the coronavirus pandemic”

The premier’s legal team asked the court for an exemption after discussing it with the justice ministry.

The power to grant such a request lies with the Jerusalem court set to hear the case.

The court, which must now rule on the formal request from Netanyahu’s lawyers, has previously said the defendant must appear in person.

In a statement just two days after the swearing-in of a unity government headed by Netanyahu following a year of political deadlock, the justice ministry pointed to “the importance of justice being seen to be done, and of public trust” in the trial.

It also reiterated that it “does not see a reason to deviate from the distinguished court’s decision on the presence of the defendants”.

Netanyahu’s lawyers slammed the ministry’s position, insisting Sunday’s hearing was “technical” and there was “no need for the prime minister to attend”.

The prosecution’s real reason for insisting Netanyahu be in court was “a media campaign seeking to show the prime minister in the dock”, his lawyers added.

In response, the justice ministry released a new statement deploring the lawyers for “taking part in a savage attack against their (judicial) colleagues, which represent an attempt to portray the prosecutor’s intentions as alien to the conduct of law.”

“The presence of the accused when charges are read against him are important for the public record of the judicial process,” the ministry noted.

Netanyahu’s trial on charges of bribery, fraud and breach of trust had been scheduled to start in March but was postposed to May 24 due to lockdown measures to contain the spread of the novel coronavirus.

Netanyahu denies allegations that he accepted improper gifts and sought to illegally trade favours in exchange for positive media coverage.

He is the first prime minister in Israel’s history to be indicted while in office.

The Jewish state’s premier since 2009, Netanyahu extended his record tenure on Sunday when parliament swore in a new three-year coalition government to end more than 500 days of political deadlock.

Netanyahu, head of the right-wing Likud party, will lead the government for 18 months before vacating the premier’s office for his former rival Benny Gantz.

Netanyahu’s trial, including all appeals, could take several years.