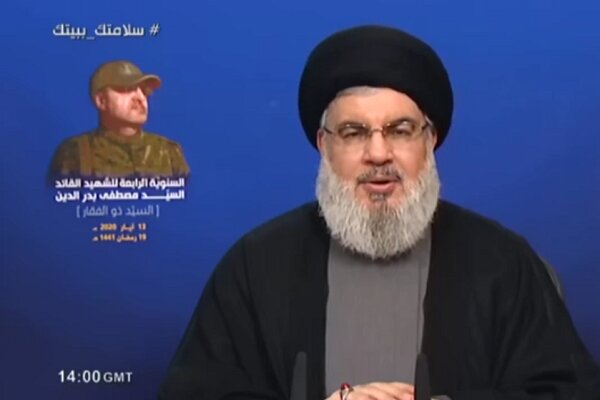 Lebanon’s Hezbollah chief Hassan Nasrallah charged Wednesday that Israel had been waging an “imaginary battle” against Iranian troops in Syria, insisting that Tehran had sent only “military advisers and experts”.

But he conceded that Israel was attacking targets “linked to missile production in Syria”, saying the Jewish state feared that the manufacturing of “precision missiles” could spell “new dangers” for Israel.

Nasrallah also denied Iran and its allies were in a battle for influence with Russia in the neighbouring country and said their chief aim was “preventing Syria from falling under the hegemony of America and Israel”.

Israel has carried out hundreds of air strikes in Syria since the start of the civil war in 2011.

They have targeted Syrian troops as well as allied Hezbollah fighters and Iranian targets, according to monitoring group the Syrian Observatory for Human Rights.

But Nasrallah, in a televised speech, denied any Iranian troops were present in the war-torn country.

“In Syria there is an imaginary battle that Israel is waging, called ‘not allowing the presence of Iranian military troops in Syria’,” he said.

He said the Israelis were “attacking everything that is linked to missile production in Syria”.

“They view the presence of Iran and resistance groups as a threat” against Israel in the future, he said.

Nasrallah said the Iranian experts were there with the aim of “advising and helping Syrian troops, and managing groups of Syrian, Arab and Islamic popular resistance forces”.

“They train them, prepare them and manage them in ongoing battles,” as well as handle “coordination with resistance movements including Hezbollah,” he said.

The head of the Shiite movement, however, mentioned “an exceptional case”, when he said for two or three months Iranian troops took part in the battle for the northern city of Aleppo.

The Damascus regime expelled rebels from the city in late 2016 in a major blow to the armed opposition.

The Hezbollah chief also rejected the notion that the Damascus regime’s allies Iran and Russia are in any power struggle in Syria.

“Iran is not waging a battle for influence with anybody, not with Russia … and not with anybody” else, he said.

“The Islamic republic’s position in Syria has been clear and based on preventing Syria from falling under the hegemony of America and Israel,” he added.

Nasrallah spoke on the four-year anniversary of the death of a top Hezbollah commander in Syria, who was killed in an explosion near Damascus international airport.

The group has blamed Sunni extremists for killing Mustafa Badreddine, who was on a US terror sanctions blacklist and wanted by Israel.

He had been on trial in absentia before a special tribunal in The Hague accused him of masterminding the 2005 bombing that killed Lebanon’s former prime minister Rafiq Hariri.

Hezbollah has denied any involvement in Hariri’s killing.

A decision in that case was expected by mid-May, but has been postponed over the novel coronavirus pandemic.

Hezbollah is the only group in Lebanon not to have disarmed after the 1975-1990 civil war, but is also a major player in Lebanese politics.

It has been officially fighting in Syria since 2013.

Nasrallah called for restoring ties with Syria, saying, “Syria is our gate for other Arab countries.”

“The financial and economic situation is the number one concern for the Lebanese people,” he added.

“Restoring ties with Syria is the only way to solve major problems including the economic ones,” he stressed.

“Smuggling between Lebanon and Syria is one of the major problems that can’t be solved without coordination with the Syrian state,” Nasrallah said.

He went on to say, “To those who call for deploying UN forces along the Lebanese-Syrian border, this is one of the major goals of the July War in 2006, ” in reference to the war between Hezbollah and Israel which resulted in the killing of 1200 Lebanese mostly civilians and 160 Israelis mostly military .

Opposition in Lebanon blames Hezbollah for the smuggling of subsidized diesel and wheat flour to Syrian via 17 illegal crossing points , resulting in the loss of hundreds of millions of dollars to the Lebanese treasury. All the illegal border crossing points are under Hezbollah’s control according to analysts.