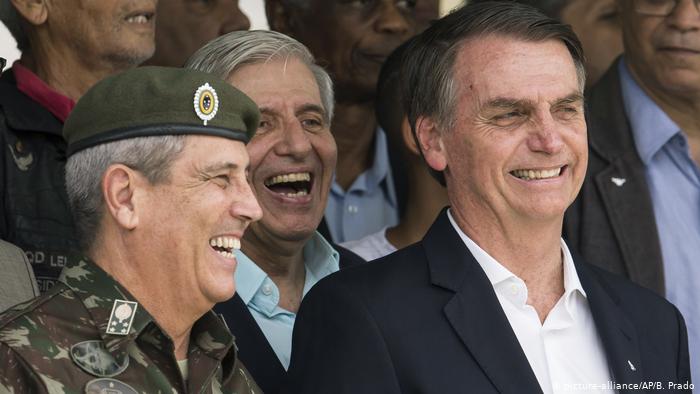 Brazilian President Jair Bolsonaro. The far-right president has continued to militarize his government, recruiting a ninth military man to his Cabinet. Bolsonaro has largely relied on the military to marshal his agenda in Brazil. Last March he named four-star Army General Walter Souza Braga Netto (L) as his new chief of staff.
Share:

By Terrence McCoy and Heloísa Traiano

RIO DE JANEIRO – Flipping through the news several weeks ago, Carlos de Lima Belucio grew alarmed. People were panicking over a strange new disease. Other countries were locking down. Then it hit him: There was only one way to save the country. Brazilian President Jair Bolsonaro had to stage a military takeover.

Ignoring warnings to stay inside, Belucio began joining demonstrations urging Brazil’s armed forces to remove the institutions that impede Bolsonaro’s rule. Using violence, if need be. The country, he said, must stay open.

“The pandemic is just a smokescreen,” said Belucio, 43, who lives in the northern city of Belém. “With a military regime, it would all be better.”

As Latin America’s largest nation grapples with its gravest health and economic challenges in a generation, and Bolsonaro flounders under the pressure, the specter of the armed forces is looming larger over public life than at any time since the fall of the military dictatorship in 1985.

As scandals have engulfed his presidency, the right-wing populist, a and former Army captain, has broadened the portfolios of the generals and former generals in his administration, allowing one to introduce a large economic aid package, undercutting his own finance minister. His most radical supporters are urging a military takeover of the government – and Bolsonaro has attended their rallies, amplifying their calls.

“We are not going to tolerate interference – our patience has ended,” he told a crowd in Brasilia calling this month for the removal of congressional leader Rodrigo Maia. “We have the people on our side, and we have the Armed Forces on the side of the people.”

The threat of military force in domestic affairs – no matter how unlikely – has further unsettled the unpredictable political situation in this nation of 210 million. More than 11,000 people have died of a disease the president has dismissed as a little flu. The economy is collapsing. Many hospitals have reached capacity. The jobless poor are worried about going hungry.

As allies abandon Bolsonaro and calls for his removal gain momentum, the political lines are being drawn. Critics are calling Bolsonaro a mortal threat to democracy. Supporters counter that Bolsonaro is, in fact, the only man who can save Brazil – from a corrupt ruling class, from officials imposing restrictions on movement and commerce, from checks and balances that have blocked the mandate Bolsonaro won with 55 percent of the vote in 2018.

In Bolsonaro’s recent moves, analysts perceive a reckless gambit for political survival. His approval ratings are cratering. Two powerful and popular officials, with the crucial portfolios of health and justice, have left his Cabinet. The supreme court has authorized an investigation into allegations made by one of them, former Justice Minister Sergio Moro, that Bolsonaro improperly tried to influence the federal police to potentially protect political allies, including his sons.

Now more than ever, the thinking goes, he needs the military – not only for its resilient popularity, but also to scare off impeachment calls.

“His latest actions look to me like someone who has so isolated himself that, desperately, he’s trying to turn people and the armed forces against other institutions,” said David Magalhães, political scientist at the Pontifical Catholic University of São Paulo. “I don’t know what could happen from here.”

Bolsonaro, whose signature campaign gesture was to point his finger to mime a handgun, has at several points since his inauguration last year hinted at deploying military force to maintain order. While protests roiled much of South America last year, he asked Congress for authority to use troops to stop any violence that might occur. His son and his finance minister took the rhetoric even further, musing it might be necessary to dissolve congress and shut down the press if, as Eduardo Bolsonaro said, “the left radicalizes.”

Analysts and former military officials say it’s unlikely Bolsonaro will marshal a military takeover of the country. Such a move would be opposed by the people, the Brazilian elite and the military itself.

“The Navy, Army and Air Force are state bodies that believe that independence and harmony between government branches is essential to govern the country,” Defense Minister Fernando Azevedo e Silva said in a statement after the Brasilia rally. “The Armed Forces will always be on the side of law, order, democracy and liberty.”

But the fact that discussion of such an intervention has even entered the public debate indicates the enduring appeal of the military in a country that has never fully reckoned with what occurred during its 21-year rule.

From 1964 to 1985, the U.S.-supported government sharply curtailed political and press freedoms, institutionalizing censorship and torture. A truth commission in 2014 found that opponents were shocked with electric prods, had insects introduced into their bodies and were even crucified. More than 430 people were killed or disappeared.

Unlike Latin American countries that aggressively pursued, prosecuted and jailed former military leaders for their roles in dictatorship crimes, Brazil hasn’t fully held to account the perpetrators of political violence.

Brazilians disagree bitterly over what transpired during that time, down to the semantics. To historians and human rights investigators, it was a military dictatorship. But to apologists, it was the “military regime” – a time they say when the problems of today’s Brazil were far less prevalent. Crime was far less pervasive, their argument goes. So was corruption. Communism was held at bay.

One of the most vociferous defenders of the dictatorship has been Bolsonaro. As a young man, he served 15 years in the Army. As an older man in Congress, he talked endlessly about the military. He defended the dictatorship. He said its actions, if anything, weren’t extreme enough. His rantings relegated him to the fringes of political life.

“He always says, ‘we people, of the military,’ but for a lot of time, that wasn’t so,” said João Roberto Martins Filho, one of Brazil’s most respected military analysts. “He plays up a reverence for the military, but the reality is that he uses the armed forces.”

In recent years, as the country has been through one political convulsion after another,nostalgia for the military regime – and calls for a military intervention – has steadily grown. Soaring gang violence,corruption scandals ensnaring a succession of presidents, the impeachment of one and the imprisonment of another: All of it contributed to the feeling that Brazil had lost control. A strong, even authoritarian, hand was needed to right things.

Bolsonaro tapped into that political current, riding it from the fringes to the presidency. The military, which once considered him an eccentric who didn’t represent its ranks, quickly fell in behind his bid.

“The root of this problem now was the moment that military legitimized the candidacy of Bolsonaro,” Filho said. “But why did the armed forces, and particularly the military, accept this? They did because they saw in him their only possible chance for the right to claim victory. The military is conservative and has always been hurt that it was removed from politics.”

But how Bolsonaro has suddenly thrust it back into politics – in the middle of a pandemic, as extremists call for a takeover – isn’t what many in its ranks wanted, analysts and former commanders said.

Roberto Sebastião Peternelli Junior, a former general who’s now a congressman, said there was no legal basis for either the removal of Bolsonaro or a military takeover. Nearly everyone in the Armed Forces, he said, agreed with him.

“All of us in the reserve, we were schooled in the same principles of ethics and morals,” he said. “I can’t see the military acting in any other way.”