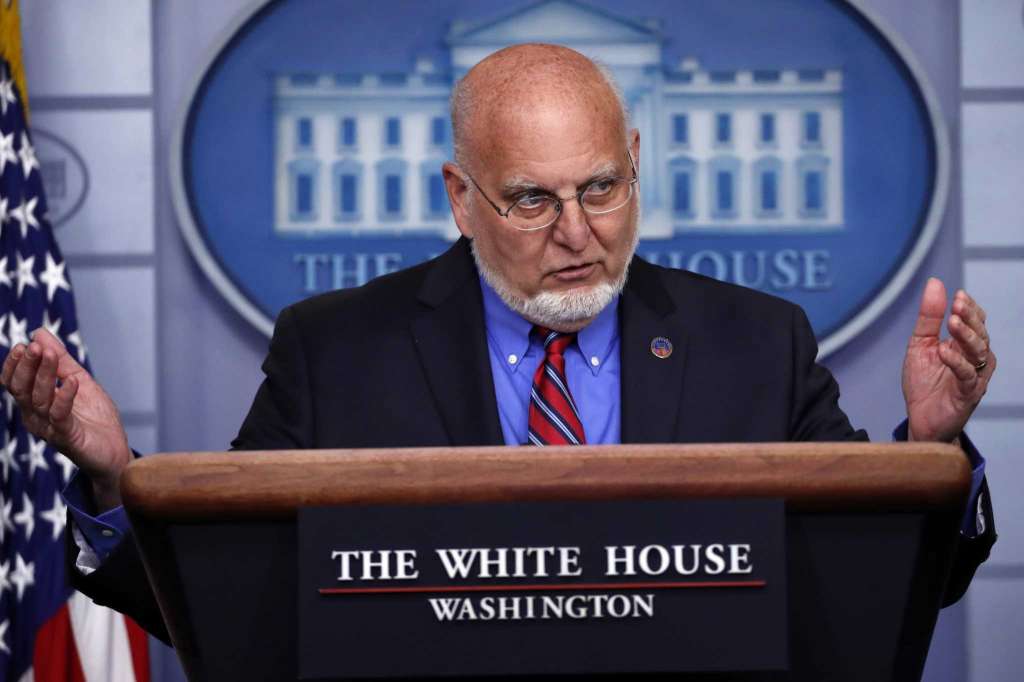 FILE – In this April 22, 2020, file photo Dr. Robert Redfield, director of the Centers for Disease Control and Prevention, speaks about the coronavirus in the James Brady Press Briefing Room of the White House in Washington. … less
Share:

WASHINGTON – The White House on Saturday scrambled to deal with the fallout from two aides testing positive for the coronavirus, as officials who were potentially exposed responded differently, with some senior members of the pandemic task force self-quarantining while others planned to continue to go to work.

Food and Drug Administration Commissioner Stephen Hahn and Centers for Disease Control and Prevention Director Robert Redfield, both task force members, said they are self-quarantining or teleworking for two weeks after exposure to a coronavirus case at the White House. On Saturday night, a spokeswoman for Anthony Fauci, the government’s top infectious diseases official, acknowledged that working from home sometimes will be among the precautions he is taking.

But several administration officials said White House staffers were encouraged to come into the office by their supervisors, and that aides who travel with President Donald Trump and Vice President Mike Pence would not stay out for 14 days, the recommended time frame to quarantine once exposed to the virus.

The conflicting ways in which officials and aides are responding after two staff members were diagnosed with the coronavirus this past week – Pence spokeswoman Katie Miller and a military valet to the president – continued to raise questions about how the White House is responding to the challenge of maintaining a safe work environment for Trump, Pence and their staff.

The White House press office declined to comment Saturday on whether employees beyond Miller and the military aide have been told to self-quarantine.

“The president’s physician and White House operations continue to work closely to ensure every precaution is taken to keep the president, first family and the entire White House complex safe and healthy at all times,” White House spokesman Judd Deere said. “In addition to social distancing, daily temperature checks and symptom histories, hand sanitizer, and regular deep cleaning of all work spaces, every staff member in proximity to the president and vice president is being tested daily for covid-19 as well as any guests.”

But the nervousness and concern among White House staffers became more palpable on Saturday, according to people familiar with the matter who, like others, spoke on the condition of anonymity to discuss the tensions. Now that Redfield and Hahn are staying away, some officials said they don’t know if they should keep going to work at the White House. Staffers who had potentially been in contact with Miller were still getting calls on Saturday from officials trying to gauge their exposure to the virus, according to one person who received a call.

All White House staffers received a memo from the White House management office on Friday, which encouraged employees to “practice maximum telework” and to “work remotely if at all possible.”

The White House will receive “heightened levels of daily cleaning,” according to the memo. It also told employees they must quarantine for 14 days if they leave the Washington region and must report all of their travel. The memo did not suggest that employees wear masks, as the CDC has suggested for all Americans in public spaces. Masks generally protect other people from the person wearing the face covering, rather than preventing the individual from contracting the virus.

“We are exercising daily caution by testing [Executive Office of the President] staff who have high proximity to the president and Vice President for covid-19,” the memo says. “For any presumptive positive covid-19 results, the White House medical Unit conducts immediate contact tracing and notifies any affected individuals.”

On Thursday, aides began to close the door to the outer Oval Office, and Secret Service and White House officials began to limit who was in the Oval Office, even as Trump continued not to wear a mask and evoked no concern.

Elsewhere in the administration, senior officials were taking varied levels of precaution in response to the positive cases at the White House.

The FDA said late Friday that Hahn began to self-quarantine for two weeks after being exposed to an individual who tested positive. A senior administration official, who spoke on the condition of anonymity because the person was not authorized to discuss the matter, said the individual in question was Miller, who was present at task force meetings attended by Hahn and other health officials.

Redfield “will be teleworking for the next two weeks,” according to a CDC spokesman, who said Redfield “has been determined to have had a low-risk exposure” on Wednesday to “a person at the White House who has covid-19.”

The spokesman, Benjamin Haynes, did not identify the infected person. Haynes said Redfield was last tested on April 27 and had a negative result.

“He is feeling fine and has no symptoms,” said Haynes, who added that, if Redfield needs to go to the White House during his teleworking time, he will have his temperature taken, be screened for symptoms and keep at a distance from others.

Both Redfield and Hahn had been scheduled to testify before the Senate Health, Education, Labor and Pensions Committee on Tuesday, but will now do so by videoconference, Sen. Lamar Alexander (R-Tenn.), the panel’s chairman, said Saturday night.

Health and Human Services Secretary Alex Azar has been tested “multiple times,” most recently on Friday, according to a department spokeswoman. He has tested negative each time and is following the advice of his physicians at the White House Medical Unit, the spokeswoman said.

Asked about a potential quarantine, the spokeswoman said Azar, a member of the task force, is continuing to consult with his doctors about whether that could be necessary.

Fauci, director of the National Institute of Allergy and Infectious Diseases and another task force member, “has tested negative for covid-19 as recently as yesterday,” an institute spokeswoman said Saturday. “He will continue to be tested regularly and is actively monitoring his temperature and other health indicators.”

At first on Saturday afternoon, the spokeswoman said Fauci, one of the administration’s most recognizable figures in the pandemic response, “is considered to be at relatively low risk based on the degree of his exposure. Nevertheless, he is taking appropriate precautions to mitigate risk to any of his personal contacts while still allowing him to carry out his responsibilities in this public health crisis.”

Then, hours later, the spokeswoman said Saturday night that the precautions include “a mix of teleworking and wearing a mask during in-person meetings.”

Brett Giroir, the HHS assistant secretary for health who is in charge of coronavirus testing, has not been at the White House since Tuesday, participating in meetings since then remotely, according to a spokeswoman. He previously tested negative for the virus, the spokeswoman said.

It remains unclear whether some White House officials and other members of the coronavirus task force have been in closer proximity to the infected aides than others and therefore would be at greater risk of contracting the virus.

But concerns were evident at the White House, where there is worry that if Miller and the unidentified personal valet to Trump are infected, then multiple officials may be at risk.

After news of Miller’s diagnosis, aides were going through seating charts, looking at her schedule to discern where she had been and trying to question anyone who may have been close to her in a room. Emails were sent about possible exposure, and staffers were called.

“Any place she spent extensive time was immediately sanitized,” one official said.

Miller was regularly in the Oval Office and around Trump when the daily coronavirus task force news briefings were ongoing, but has not been since the briefings ended a couple of weeks ago. She was in the task force meeting in the Situation Room on Thursday, sitting in the back row facing Pence on the far right side, closer to the door, according to a person familiar with the situation.

Miller, who had told other colleagues that she did not have symptoms, attended a senior staff meeting on the coronavirus at 8 a.m. on Friday and was near other aides, rattling some of her White House colleagues. Neither Trump nor Pence was in the meeting.

A number of aides from Pence’s office were sent home on Friday after the contact tracing was complete. Miller is married to top White House aide Stephen Miller, who is expected to quarantine at home for the time being.

A White House official said all visitors and employees now will be questioned by doctors about a list of symptoms before they enter the complex. The East Wing staff is wearing masks.

Agents on the president’s detail – who work in three rotating shifts – typically huddle in a small “down room” a floor below the Oval Office when Trump is there. Those agents have been wearing face masks for several days, according to one administration official, due to concerns they cannot appropriately distance in this confined space.

But other Secret Service agents are not wearing masks on campus, according to two senior administration officials who interact with Trump.

The concerns are spreading to the Trump campaign, where a senior official said there was no plan to hold a large-scale campaign event with the president until at least August.

“It’s just not practical right now,” the official said, “to even try.”