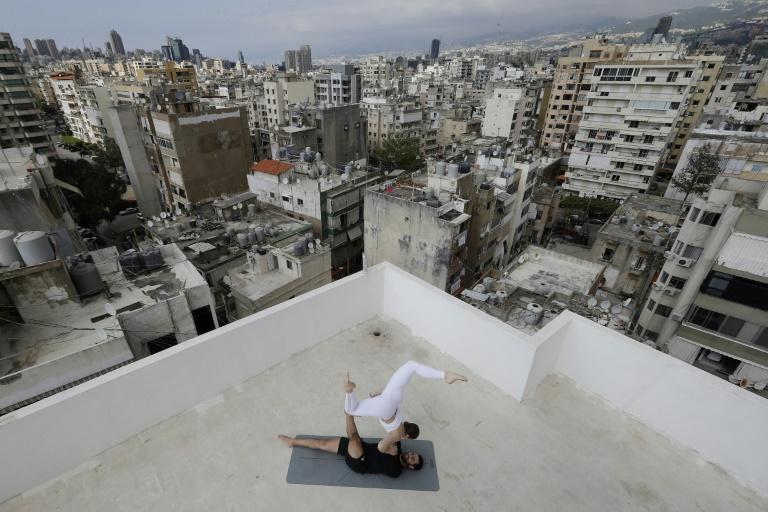 Usually the kingdom of water tanks and satellite dishes, Lebanon’s rooftops have recently been graced by unlikely scenes of locked-down residents fleeing their flats.

Deprived of rehearsal rooms or workshops by restrictions imposed to stem the spread of the novel coronavirus, or just needing some extra breathing space, many people have found solace without leaving their buildings.

Several have ventured onto their roofs to escape the lockdown after taking to the streets in recent months as part of nationwide protests against rulers deemed corrupt and inept.

AFP photographer Joseph Eid spent weeks scaling staircases to see how people have taken over underused rooftops, whose only visitors used to be caretakers, plumbers and electricians.

“When confinement started, I soon couldn’t take it anymore, and that’s when I thought of checking out the roof,” said Sherazade Mami, a Tunisian dancer who has been living in Beirut since 2016.

Every day, she walks up to the ninth floor of her building with her water, her mat and her music to stretch and practise.

Like others discovering their rooftops during the lockdown, Mami said her outlook on the city had changed.

“Once you’re up there, you realise — I have an amazing view on the whole of Beirut. It’s beautiful, the city is so quiet,” she said of the sprawling metropolis usually known for its noise and chaotic traffic.

“You can hear the birds singing, you’re under the sun, it’s heaven … It’s better than rehearsing in the theatre in some ways,” she added.

A bird’s eye view of Beirut around sunset since mid-March would show largely empty streets and shuttered shops at ground level, but unusual activity above.

On a hedgehopping flight over the city, maybe yoga instructors Rabih al-Medawar and his wife Alona Aleksandrova could be spotted trying out new acrobatic moves on their roof.

Travelling north towards the seaside town of Byblos, Lebanese gymnast Karen Dib might appear, tumbling down the red mat she had laid out on the top of her building.

And in Tripoli, Lebanon’s main northern city, artist and activist Hayat Nazer might be glimpsed working on her latest canvas.

Others too have been heading upstairs to sunbathe, read or smoke a shisha water pipe.

Nazer said she hoped the weeks of lockdown would leave a positive mark on the way residents thought of their city.

“I really hope people will start planting and greening their roofs to help the environment,” she said.

“They have been underused. You can do sports there, organise barbecues, have parties.”

Mami, the dancer, said she would not forsake her roof when the lockdown ended and her theatre reopened its doors.

“I have found a place where I feel free and I will continue to use it,” she said.