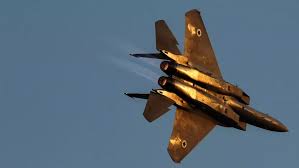 Syrian air defences thwarted an Israeli missile attack on a research centre and a military base in the northern province of Aleppo, state media said on Monday, in the fifth such strikes in two weeks on suspected Iranian targets Ma5 5 2020. Israel vows to pursue Syria operations until Iran leaves.
Share:

Jerusalem (AFP) – Israel will keep up its operations in Syria until its arch enemy Iran leaves, Defence Minister Naftali Bennett said Tuesday after strikes on Iranian-backed militias and their allies killed 14 fighters.

Israel has launched hundreds of attacks in Syria since the start of the civil war in 2011, targeting government troops, allied Iranian forces and fighters from Lebanese militant group Hezbollah.

The Jewish state rarely confirms details of its operations in Syria but says Iran’s presence in support of President Bashar al-Assad is a threat and that it will continue its attacks.

Bennett, speaking to the state-owned Kan 11 television news channel, did not claim Israeli responsibility for the latest overnight strikes on Syria.

But he said: “Iran has nothing to do in Syria… (and) we won’t stop before they leave Syria”.

A spokesman for the US-led coalition battling the Islamic State (IS) group said it was not responsible for the raids in the desert near the eastern Syrian town of Mayadin.

Bennett said Iran was “trying to establish itself on the border with Israel to threaten Tel Aviv, Jerusalem and Haifa”.

His allegation is not new and has often been made by Israeli officials.

“They have to leave Syria,” Bennett said.

“This is our life we are talking about, the life of our children, and if we allowed them to settle in Syria… in a year we will wake up with 10,000 missiles, 20,000 missiles, that would put us in danger.

“For them it’s an adventure, they are 1,000 kilometres away… it’s their Vietnam in a way,” Bennett said.

The Israeli defence minister said Iran should be more concerned with its own citizens and mounting domestic problems.

“They have enough problems at home with the coronavirus (and) the collapsing economy,” he said.

Iran’s confirmed coronavirus infections are over 107 ,000 while the overall death toll from COVID-19 topped 6,600.

Iran is facing economic hardship that worsened after US President Donald Trump withdrew from a landmark nuclear clear and reimposed unilateral sanctions on Tehran in 2018, targeting key oil and banking sectors.

Bennett said Iran had become a “burden” for the Assad regime.

“It used to be an asset for the Syrians, it helped Assad deal with Daesh, but now it’s a burden,” he said, referring to IS.

The overnight attacks in Syria were the latest in a spate of strikes on Israel’s neighbour.

On Friday, the Observatory said Israeli raids hit a missile depot in eastern Syria that belonged to Hezbollah, the Iran-backed Lebanese movement that fought a war with Israel in 2006.

That strike came a day after Germany designated Hezbollah a “Shiite terrorist organisation,” winning applause from the Israeli government.

Israel and the United States have long designated Hezbollah as a terrorist group.

And last week, Israel was accused of hitting pro-regime positions in Syria at least three times.

Commenting on the apparent intensification of Israeli raids, Yoram Schweitzer of Israel’s Institute for National Security Studies told AFP the Jewish state might be reacting to increased hostile action from Iran and Hezbollah.

It is also possible that Israel is trying to apply added pressure as its rivals endure the fallout of the coronavirus crisis, he said.

“I don’t know which one of the two it is, but it might be a combination of the two,” Schweitzer said.