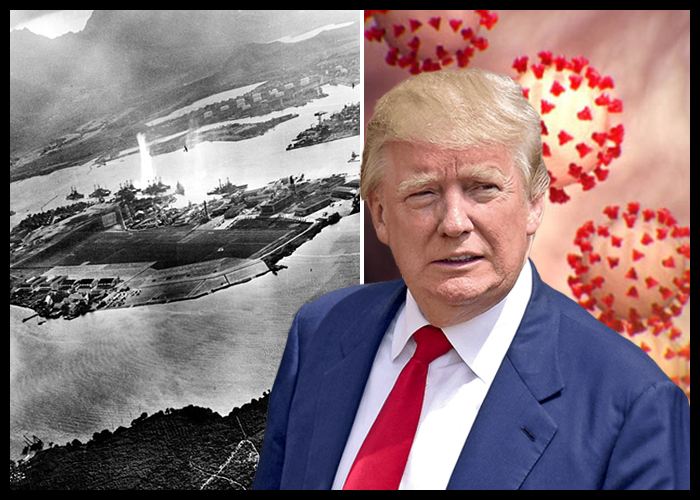 File photo: US President Donald Trump has described the coronavirus pandemic as the “worst attack” ever on the United States, pointing the finger at China. Worse than the Japanese bombing of Pearl Harbor in World War Two, or the 9/11 attacks. He and the First Lady tested positive October 2, 2020
Share:

US President Donald Trump has described the coronavirus pandemic as the “worst attack” ever on the United States, pointing the finger at China.

Mr Trump said the outbreak had hit the US harder than the Japanese bombing of Pearl Harbor in World War Two, or the 9/11 attacks two decades ago.

His administration is weighing punitive actions against China over its early handling of the global emergency.

Beijing says the US wants to distract from its own response to the pandemic.

Since emerging in the Chinese city of Wuhan in December, the coronavirus is confirmed to have infected nearly 1.3 million Americans, killing more than 76,000.

What did President Trump say?

Asked later by a reporter if he saw the pandemic as an actual act of war, Mr Trump indicated the outbreak was America’s foe, rather than China.

Who else in Trump’s team is criticising China?

The deepening rift between Washington and Beijing was further underscored on Wednesday as Secretary of State Mike Pompeo renewed his rhetoric against China, accusing it of covering up the outbreak.

He stuck by his so far unsubstantiated charge that there is “enormous evidence” the coronavirus hatched in a Chinese laboratory, even while acknowledging there is still uncertainty about its origins.

“Those statements are both true,” America’s top diplomat told the BBC. “We don’t have certainty and there is significant evidence that it came from a lab.”

One of the most trusted US public health experts has said the best evidence indicates the virus was not made in a lab.

Dr Anthony Fauci, a member of Mr Trump’s coronavirus task force, said on Monday the illness appeared to have “evolved in nature and then jumped species”.

Why is the US blaming China?

President Trump faces a tough re-election campaign in November, but the once humming US economy – which had been his main selling point – is currently in a coronavirus-induced coma.

As Mr Trump found his management of the crisis under scrutiny, he began labelling the outbreak “the China virus”, but dropped that term last month days before speaking by phone with Chinese President Xi Jinping.

Both Mr Trump and his likely Democratic challenger, Joe Biden, appear to be fastening on to China’s unpopularity as an election issue, with each accusing the other of being a patsy for America’s primary economic competitor.

As the coronavirus began spreading in the US back in January, Mr Trump signed phase one of a trade deal with China that called a truce in their tariff war. The US president’s hopes of sealing a more comprehensive phase two deal are now in limbo because of the pandemic.

What’s the latest on the situation in the US?

The Centers for Disease Control (CDC) had prepared detailed guidance on how the nation’s public places could reopen, but the White House decided against sharing it, US media report.

Trump administration officials reportedly asked for changes to the guidelines, saying they were too specific as the virus is affecting regions differently.

The White House’s previously released guidance is much more vague than the CDC’s.

The president has repeatedly said state governors are in charge of their reopening process – though some leaders have faced criticism for easing restrictions even as case numbers rise.