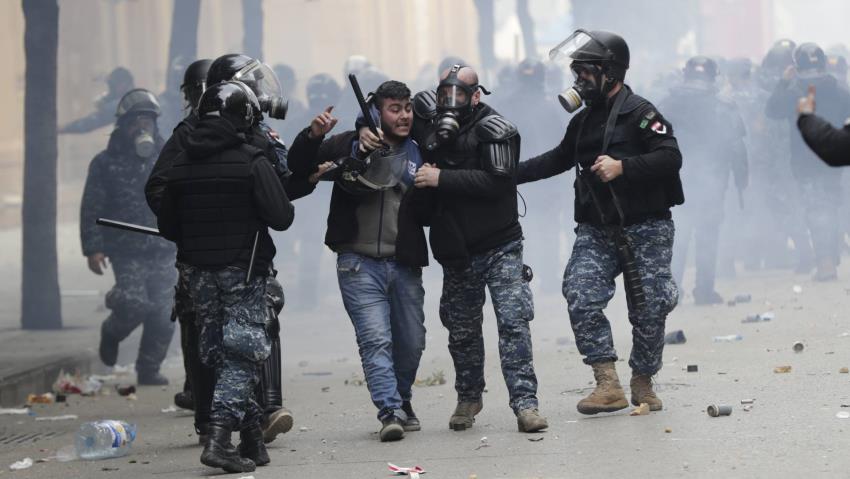 ‘Impunity is a pattern’: The lawyers taking on torture in Lebanon’s prisons
Share:

Beirut, Lebanon – A senior Lebanese army source has denied that the military tortured detainees who said they were beaten with sticks and electrocuted after their arrest during riots last week.

The seven detainees in question were arrested by the army intelligence on Wednesday in the southern port city of Sidon. That night, angry protesters took to the streets across the country over the rapid depreciation of the local currency.

Some threw rocks and petrol bombs at banks and, in a small number of instances, security forces.

The Sidon detainees were accused of participating in riots and attacking soldiers, according to Lama al-Amin, a lawyer representing the detainees.

By Friday, most had not been allowed to contact a lawyer or family member in violation of regulations, al-Amin told Al Jazeera.

Al-Amin is a member of The Committee of Lawyers in Defense of Protesters, an ad hoc group born out of an unprecedented popular uprising against Lebanon’s establishment in October 2019.

Working with the Beirut Bar Association, al-Amin was able to get access to the detainees on Saturday at Sidon’s Zgheib Barracks, the local army intelligence headquarters.

“They were scared, terrified, and had been beaten,” she said. “They told me about all the torture they had undergone. Two said they had been electrocuted.”

Six were released that day with one more remaining in custody. Three were taken straight to the hospital, and two remained there on Monday.

Medical reports on two detainees showed one was repeatedly vomiting and had pain in his head and both legs. Another had bruises on his back and pain in his right shoulder and both legs, in addition to swelling on the soles of both of his feet.

The lawyers’ committee said a number of those held had been electrocuted, beaten with sticks, insulted and threatened.

Alaa Antar, one of the young men who remains in hospital, declined to comment citing his medical condition.

The army source said an investigation had found no torture occurred. “If they have any complaints to put forward, they have the right to do that here. Our doors are open,” the source said.

Judge Peter Germanos, the government commissioner to the military court, has asked the investigative branch of army intelligence to carry out an investigation into the allegations of torture, and asked that he be informed of the results.

The torture allegations come after a week of fiery protests and riots in Lebanon in response to the rapid depreciation of the local currency, amid growing unemployment and fears that hunger could become widespread.

As a result of wounds sustained from live fire by soldiers, 26-year-old protester Fawwaz Fouad as-Samman died on April 28.

The military said more than 150 of its personnel were wounded in attempts to control riots last week.

Its recent handling of protests has brought heavy criticism from rights groups, in addition to protesters, many of whom formerly saw the army as one of the only respectable institutions in a country that regularly ranks as one of the most corrupt in the world.

“If proven, the allegations of the army torturing a detained protester – soon after the killing of a demonstrator last week – is a troubling escalation in their attempt to stifle dissent,” Michael Page, deputy Middle East director at the HRW, told Al Jazeera.

He said the army should investigate the allegations and hold those responsible to account.

“Such potential blatant violations of the law cannot be allowed to continue with impunity,” Page said.

The army in 2017 was widely accused of torturing a number of Syrian detainees, leading to the death of four in their custody.

The military never said whether any personnel were held accountable in the case, and officially blamed the deaths on pre-existing illnesses.

‘Down with military rule’

Protesters from different parts of Lebanon met in Tripoli on Sunday and marched to the family home of the 26-year-old who was killed by the army last week.

“Those who kill their people are traitors,” some chanted. “Down with the rule of the military.”

A demonstrator who has come to be known simply as Jack The Flag, a reference to the large Lebanese flag he carries, accused the army of safeguarding the political elite.

“It’s quite simple – if you treat us like citizens asking for our rights, we will be the first ones to protect you,” he told Al Jazeera.

“But the army, like the rest of the Lebanese state, is prone to favouritism and sectarianism and political quotas. Recently they are not protecting us – they are standing in our way.”