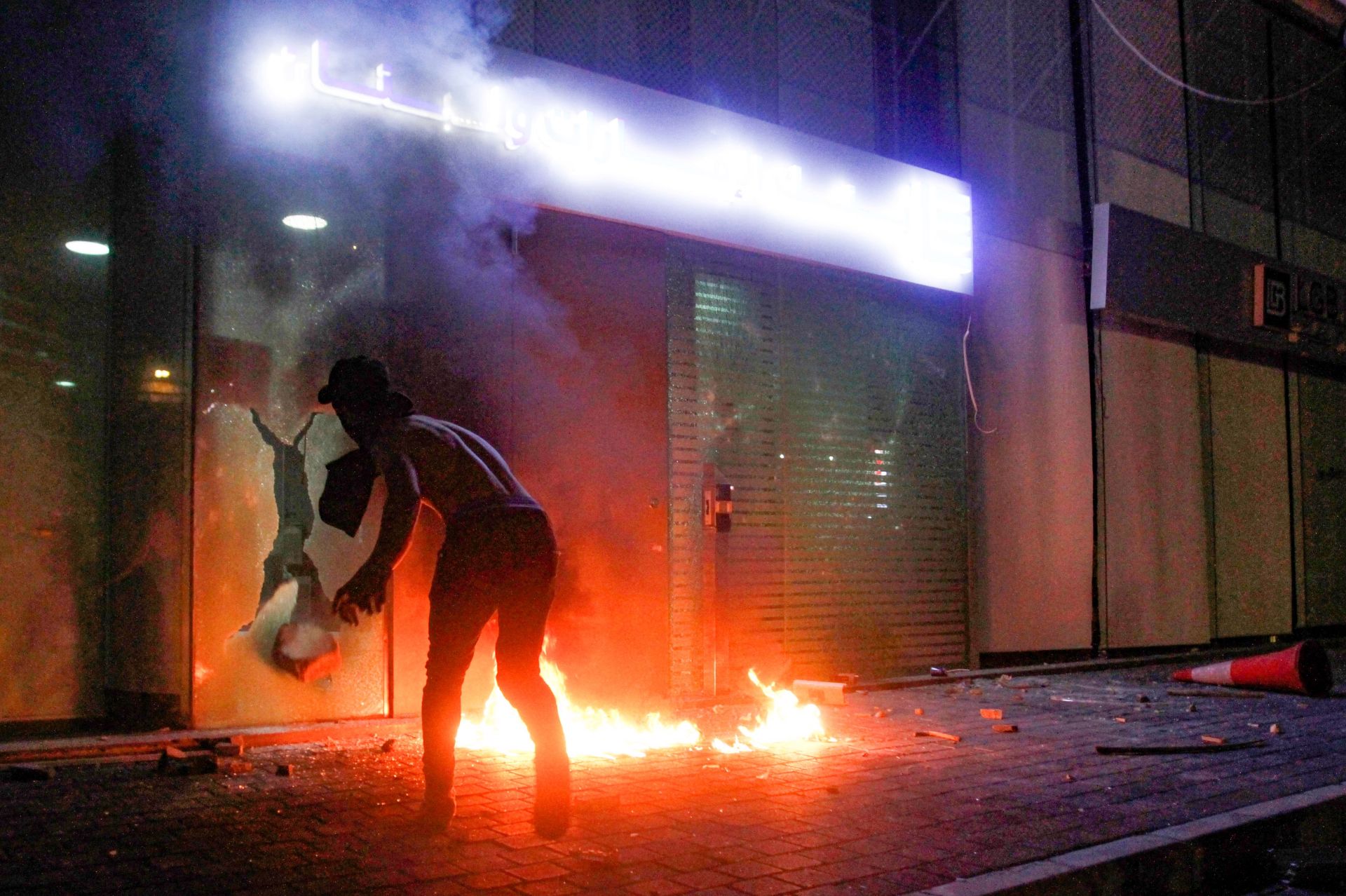 A Lebanese protester launches a bottle bomb toward the entrance of a bank in the southern Lebanese city of Sidon late on April 29, 2020, as anger over a spiralling economic crisis in the country re-energised a months-old anti-government movement in defiance of a coronavirus lockdown. – Clashes broke out between protesters and the Lebanese army , hours after the under-fire central bank chief blamed a lack of government reforms for a spiralling economic crisis that has sparked demonstrations. A plummeting currency and fast-rising prices have reignited protests that saw one man killed in the northern city of Tripoli after being struck by a bullet fired by a soldier in clashes earlier this week. (Photo by Mahmoud ZAYYAT / AFP) (Photo by MAHMOUD ZAYYAT/AFP via Getty Images)
Share:

Hyperinflation is a heavy word, a simple breath that conveys with it a staggering amount of historical significance and trauma. Blamed for Hitler’s rise and the fall of the Weimar Republic, the downfall of the first American currency issued by the Continental Congress, and the cause of numerous downfalls of governments, hyperinflation was also something Bitcoin and its sound money principles were positioned against from the beginning with its 21 million Bitcoin limit — an idea that has spread, in spirit if not in practice, to many other cryptocurrencies.

As the COVID-19 world positions itself into a strange potential stagflation situation due to the collapse of categories of demand due to lockdown restrictions as well as supply shocks caused by the disease, the fiat currencies of some governments are collapsing in value — leaving their people stranded, hungry, and desperate. This, in turn, leads to inflation — as belief in a government’s ability to pay its own debts and maintain a stable economy flounder, its fiat currency weakens, and the goods you can buy with that fiat currency decrease. Once that inflation hits a critical phase and continues accelerating, it is dubbed hyperinflation.

In Lebanon, the government has defaulted on its debt and warned that its large amount of public foreign debt has lowered foreign exchange reserves to critical levels. Public spending cuts were promised by Prime Minister Hassan Diab, a technocrat partially supported by Hezbollah — along with a sobering projection that 40% of Lebanon’s population might sink below the poverty level.

This, coupled with the troubles caused by the COVID-19 pandemic and ensuing lockdown, has created a critical amount of hyperinflation. The Lebanese pound has sunk to new lows, almost halving in value in a matter of weeks. Consumer goods prices have shot up 50%. Savers have been locked out of their deposits since mid-October, when unrest first emerged.

Protests have been sparked in major cities across Lebanon as a result, with some protestors speaking of either “dying from the disease or dying from hunger”. The Lebanese military has fired on protestors with live ammunition and killed one, 26-year old Fawwaz Fouad al-Seman, sparking more unrest at his funeral.

Amid this darkness, in perhaps the most humorous take on the situation, Lebanese protestors conducted a funeral for the Lebanese pound.

The theme of cryptocurrency in Lebanon and the Middle East in general is still very nuanced. Questions of access to the banking system, a fiat currency worth exchanging cryptocurrencies for, or the electricity and Internet required to mine or run a node abound when it comes to retail exposure and usefulness of Bitcoin on the ground: while there are some small shoots of progress, it’s hard to characterize any cryptocurrency as having any significant effect in the current situation for the vast majority of the people affected.

Where Bitcoin and cryptocurrency plays a larger role is in the theory behind what should be done, and what solution there might be. Lebanon, like many other countries before it, is going to the IMF for a solution and is likely to look to cut public spending and come to a settlement with its debt owners.

A standard economic prescription is the increased dollarization of the economy, using a “safe haven” fiat currency as a substitute for a depreciating one in some fashion. In effect, this is what the depreciation of the Lebanese pound and shut access to the Lebanese banking system really represent: an increasing demand among the elite and the people of Lebanon for the US dollar.

This is a tried-and-true formula — a country has significant US-based debts because its imports are priced in US dollars, but sold in domestic currency — and its foreign debt instruments are priced in US dollars too. So instead of trying to defend its now depreciating domestic currency, it might switch in various forms or altogether to a stronger, more currently credible fiat — likely the fiat unit its debts are denominated in, which with the current global financial order, is likely to be the USD.

The challenge of cryptocurrency adherents is to place themselves in this discussion: ensure enough bottoms-up movement towards international transactional flows such that a top-down entity might consider a more partial dollarization or might switch to cryptocurrencies altogether from fiat currencies. This would involve making sure there was more baseline access to cryptocurrency tools, even among individuals who may have sporadic power or Internet access and creating more scale and usage, even in countries that are not typically seen as cryptocurrency hotspots.

To be fair, that step may seem far off today, especially in the context of a country where there are sparks of cryptocurrency adoption, but little more — yet this urgent economic and political crisis is one of yet another chain of events that replicates itself year-after-year. Bitcoin and cryptocurrencies may not fully be able to help at scale yet — but in time, eroding trust in current financial systems ensures that this discussion will continue in places like Lebanon and beyond.