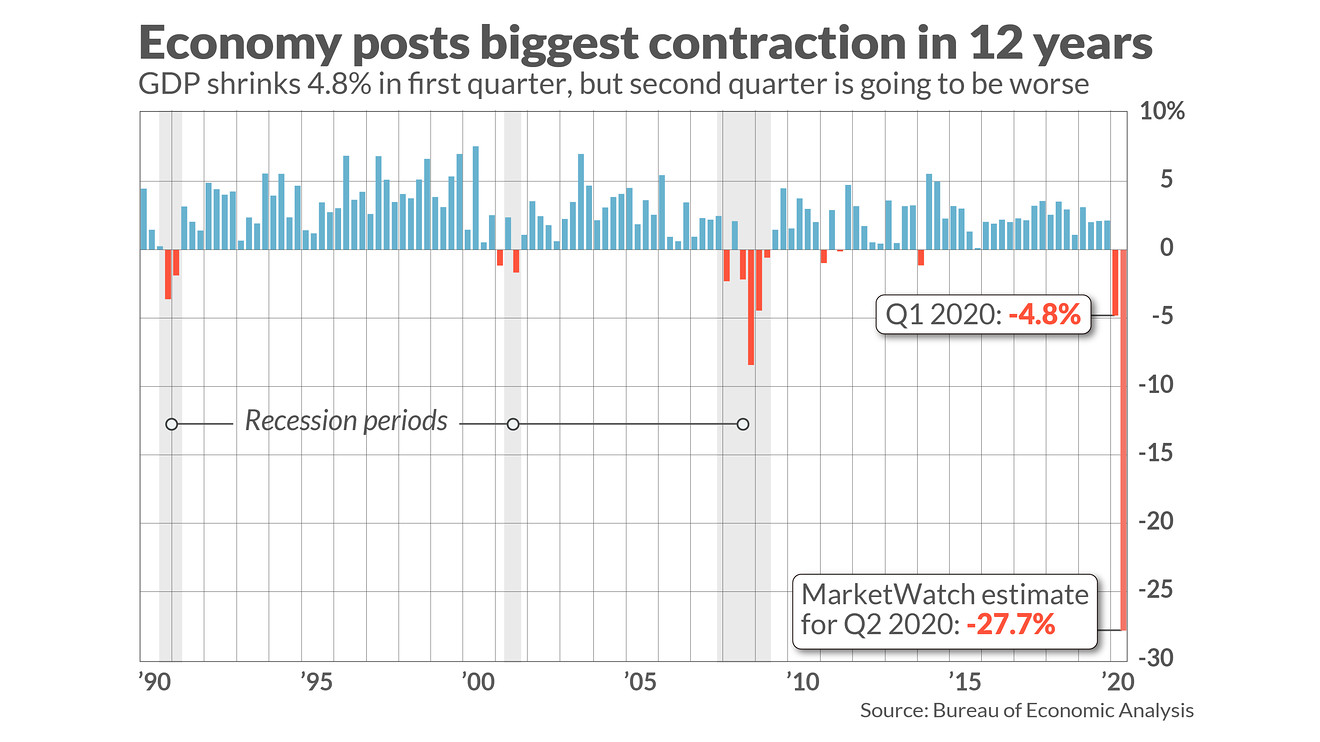 The numbers: The collapse in the U.S. economy caused by the coronavirus pandemic triggered the biggest drop in gross domestic product in the first quarter since 2008 in a prelude to an even more massive decline in the spring. GDP, the official scorecard for economic growth, shrank at a 4.8% annualized pace.

GDP, the official scorecard for the economy, shrank at a 4.8% annualized pace from the beginning of January to the end of March, the government said Wednesday. Economists polled by MarketWatch had forecast a 3.9% decrease.

The worldwide spread of the coronavirus begin to nip at the edges of the U.S. economy early in the quarter before exploding in March into the biggest crisis since the Great Depression some 90 years ago.

The economy is likely to contract by 25% or more in the second quarter, with some forecasts putting the decline at a record 40%.

Before the crisis, the U.S. had been expanding at a steady 2% pace during what had become the longest expansion in history at 11 years.

What happened: Consumer spending, the main engine of the economy, fell at a 7.6% annual pace. That’s the largest retreat since 1980.

Americans slashed spending on cars, clothes, travel, eating out and most other goods and services as millions of people lost their jobs, stores were closed, and households tried to save more money to get them through the crisis.

Most notably, health-care spending declined a sharp 2.3% despite an ongoing pandemic. Hospitals have canceled or delayed many elective procedures and patients have stayed away for fear of contracting the virus, causing many hospitals with relatively few coronavirus patients to lay off or furlough workers.

The value of unsold goods, or inventories, also fell by a $29.4 billion annual rate.

The housing industry was one of the few bright spots. Investment surged 21% as low mortgage rates encouraged construction companies to build more houses to meet rising demand. The surge is all but certain to fizzle out in the second quarter, however.

With the entire world economy under siege, trade has suffered everywhere. U.S. exports slid 8.7% and imports fell an even steeper 15.3%. A smaller trade deficit adds to GDP, but it’s no solace when U.S. companies can’t sell their goods overseas and Americans can’t afford to buy imports.

Most of the nearly $3 trillion in federal aid to unemployed workers and closed businesses didn’t start flowing until April. Still, only direct government spending is included in GDP. Financial aid and transfers such as Social Security are not.

The rate of inflation was little changed at 1.3%. Inflation was low before the crisis and could go even lower still.

Big picture: The economy has already plunged into a deep recession and is likely to be weak for quite some time. How quickly the U.S. turns around and begins to grow again will depend on how well the states and federal government limit the spread of COVID-19 and allow individuals and businesses to get back to work.

Even then, lingering worries about the virus are likely to cause many Americans to continue to practice social distancing, an outcome that will harm industries such as airlines, hotels and restaurants.

What they are saying?: “The upshot is this was already an economic catastrophe within two weeks of the lockdowns going into effect. The second quarter will be far worse,” said U.S. economist Paul Ashworth of Capital Economics.

“This gives us the first true insight into the economic devastation being wrought by COVID-19 and public health efforts to keep the pandemic under control,” said Michael Reynolds, investment strategy officer at Glenmede.

Market reaction: The Dow Jones Industrial Average DJIA, +2.20% and S&P 500 SPX, +2.65% have rallied in the past week, in fits and starts, on the hope that the U.S. economy will continue to reopen gradually. Stocks opened higher in Wednesday trades.