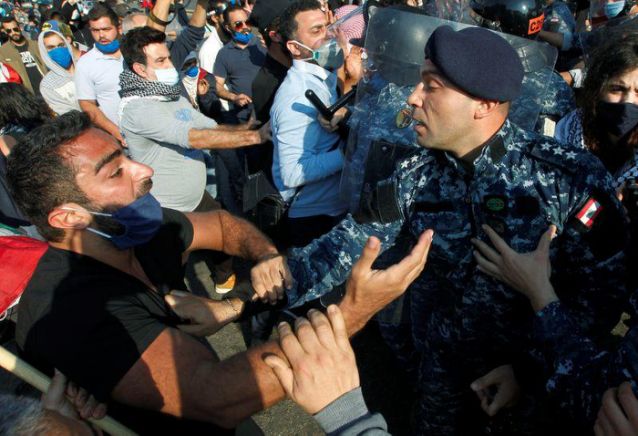 A Lebanese police officer confronts a demonstrator during a protest against growing economic hardship in Beirut, Lebanon April 28, 2020. REUT
Share:

Lebanon is grappling with renewed protests following a collapse in its currency, soaring inflation and spiralling unemployment, but its dire financial straits have only been worsened by a shutdown to rein in the coronavirus pandemic.

The growing unrest threatens to tip Lebanon into more serious conflict, even as Beirut looks to pass an economic rescue plan and enter talks with foreign creditors after defaulting on hefty debt obligations last month.

An accumulation of bad financial decisions, inaction and entrenched corruption and cronyism, were the cause of Lebanon’s crisis, Al Arabiya quoted David Schenker, the U.S. assistant secretary for Near Eastern affairs, as saying.

“For Lebanon to be in a position to receive assistance from international financial institutions it must prove that it is ready to make difficult choices and decisions to show it is 100% committed to reform,” it quoted him saying in an interview.

Lebanon’s government, formed in January with the support of the powerful Iranian-backed movement Hezbollah, has struggled to make economic reforms demanded by foreign donors. The United States has classified Hezbollah as a terrorist group.

The U.S. official also welcomed a ceasefire announcement by the Saudi-led coalition that has been battling the Iran-aligned Houthi movement in Yemen for five years. The truce was prompted by the pandemic and as a measure to support U.N. peace efforts.