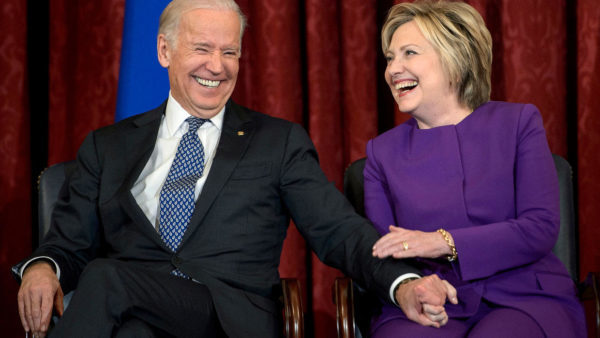 Hillary Clinton endorsed Joe Biden’s White House bid on Tuesday, saying the United States needs a “real president” and not just “somebody who plays one on TV.”

“I want to add my voice to the many who have endorsed you to be our president,” Clinton told Biden during a live video linkup from their respective homes.

“I wish you were president right now,” said Clinton, who headed the Democratic ticket in 2016 but lost to Republican Donald Trump.

“Joe Biden has been preparing for this moment his entire life,” the former First Lady said.

“I’ve had the privilege to work with him,” said Clinton, who served in the US Senate with Biden and was Secretary of State for four years when he was former president Barack Obama’s vice president.

Clinton said the coronavirus crisis gripping the United States — which has by far the world’s highest death toll and caseload — “is a moment that we need a leader, a president, like Joe Biden.

“Think of what it would mean if we had a real president not just somebody who plays one on TV,” she said in a jab at Trump, Biden’s expected opponent in November.

“Just think of what a difference it would make right now if we had a president who not only listened to the science with facts over fiction but brought us together,” Clinton said.

Biden thanked Clinton for the endorsement, calling her “the woman who should be president of the United States right now.”

Biden said that rather than accepting Clinton’s endorsement “I wish this was… my supporting your re-election as president of the United States.”

“We’d have the pandemic but you would have already been prepared for it,” he said.

Biden is the presumptive Democratic nominee to face Trump in the November 3 election although he will not be officially nominated until the party convention, which has been pushed back to August because of the virus outbreak.

The 77-year-old former vice president has already been endorsed by Obama, and one-time rivals for the Democratic nomination Bernie Sanders and Elizabeth Warren, among others.

Brad Parscale, Trump’s campaign manager, reacted to Clinton’s endorsement of Biden by saying on Twitter that they “both carry baggage of decades in the DC swamp.”

The Trump campaign manager also made references to Tara Reade, a former Biden staffer who has accused him of sexually assaulting her years ago, a claim his team firmly denies.

Reade, who had previously accused Biden of unwanted touching, expanded on her claims in March, saying he assaulted her in August 1993.

Clinton’s endorsement came as a survey published on Tuesday found that two-thirds of Americans believe the coronavirus pandemic is “very or somewhat likely” to disrupt the ability to vote in November.

But a majority — 59 percent — of those polled by the Pew Research Center said they were confident the election will be conducted fairly and accurately.

Trump on Monday dismissed allegations by Biden that he would try to delay the election.

“I never even thought of changing the date of the election. Why would I do that?” Trump told reporters at the White House.

The president cannot unilaterally change the date of the ballot but Biden raised concerns last week that Trump may try to do so.

“Mark my words, I think he is gonna try to kick back the election somehow, come up with some rationale why it can’t be held,” Biden said during an online fundraiser.