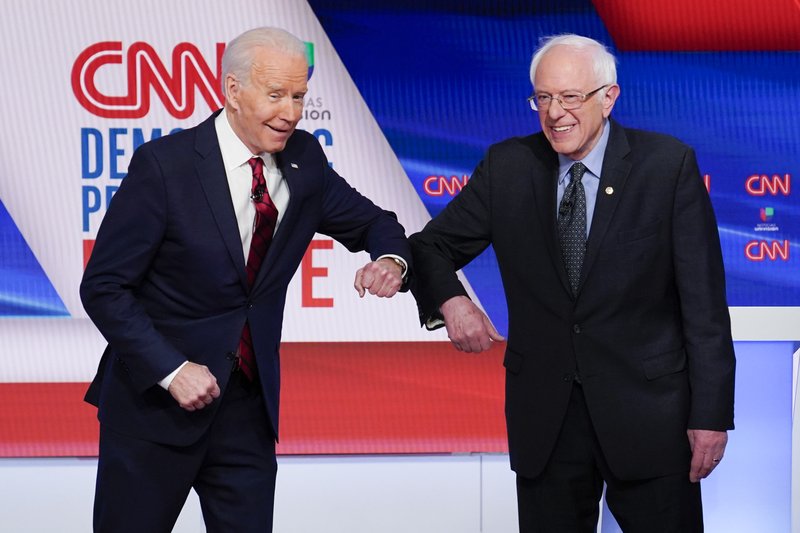 By MARINA VILLENEUVE and JENNIFER PELTZ

The Democratic members of the state Board of Elections voted to nix the primary. New York will still hold its congressional and state-level primaries on June 23.

Commissioner Andrew Spano said he worried about potentially forcing voters and poll workers to choose between their democratic duty and their health. While there will still be other offices on the ballot, Spano reasoned it made sense to give voters an opportunity to choose in contested races but not to “have anyone on the ballot just for the purposes of issues at a convention.”

The results of the upcoming primary were largely symbolic since Sanders, a U.S. senator from Vermont, had already dropped out of the race, making Joe Biden the presumptive Democratic nominee. Still, the cancellation comes at a pivotal time for the former vice president, who is working to coalesce progressives’ support behind him — and could find those efforts complicated.

Sanders’ campaign had asked the commissioners not to cancel the primary, noting that it helped select delegates who help determine the party’s platform and rules.

“Today’s decision by the State of New York Board of Elections is an outrage, a blow to American democracy,” Sanders senior adviser Jeff Weaver said in a statement, arguing the Democratic National Committee “must” overturn it.

The move sets up a potential showdown with the national party and Sanders over the New York delegation to Democrats’ summer convention, scheduled for the week of Aug. 17 in Milwaukee.

Sanders has endorsed Biden, but the two camps are in negotiations over how to distribute convention delegates. Sanders has said he wants his supporters to continue voting for him in upcoming primaries, both for them to have their say and to maximize his influence on the party platform and rules.

The Biden campaign did not immediately respond to a request for comment on New York’s action. But one of Sanders’ top allies pointed at Gov. Andrew Cuomo and said Biden isn’t to blame, though it hurts the presumptive nominee anyway.

“This kind of Democratic Party politics is an outrage,” said Larry Cohen, the chair of Our Revolution, the grassroots offshoot of Sanders’ 2016 presidential campaign. Cohen added, “I can’t imagine they don’t realize this creates disunity at a time they are trying to build unity.”

Cohen also scoffed at the notion that New York could hold primaries for other offices but not for president.

“This is the Democratic Party of the 19th century,” he said.

Cohen co-chaired a special Democratic commission that overhauled the national party’s primary process after the 2016 election. Among the changes were making it easier to vote in New York’s closed Democratic primary by giving independent voters more time to change their registration.

Long before the pandemic, all state parties submitted “delegate selection plans” for the national party’s approval. Going outside that approved plan almost certainly would require a waiver from the national party and subject New York to penalties that could cost the state as much as half its votes at the convention.

The New York Democratic Party has until its mid-July meeting to decide how to handle delegates, chair Jay Jacobs said.

“I would like to see it be a fair allocation of delegates so that the Sanders supporters are represented in that delegation,” Jacobs said. “To what degree and what number, I don’t know.”

He said he’d consult with the Biden and Sanders camps and the DNC to hash out something “that everybody would feel is fair.”

Weaver said the action in Albany violated New York’s approved delegate selection plan, and if it’s not “remedied,” the state should lose all its delegates to the party convention.

The New York Working Families Party, which endorsed Sanders, said the state Democratic Party “just sent a clear message to progressives that their voice and their values do not matter.”

The decision to cancel was left to Democratic state election commissioners.

Both the state’s Democratic Party and Cuomo have said they didn’t ask election commissioners to make the change. A little-known provision in the recently passed state budget allows the Board of Elections to remove from the ballot candidates who have suspended or terminated their campaign.

Co-Chairman Douglas Kellner said canceling the primary was a “very difficult decision,” but Sanders’ decision to suspend his and endorse Biden, “effectively ended the real contest for the presidential nomination.”

“What the Sanders supporters want is essentially a beauty contest that, given the situation with the public health emergency that exists now, seems to be unnecessary and, indeed, frivolous,” Kellner said.

New Yorkers can choose to vote with an absentee ballot in the remaining June primaries under a Cuomo executive order that adds the risk of acquiring COVID-19 as a reason. Cuomo also recently announced the state is sending mail-in ballot applications to voters.