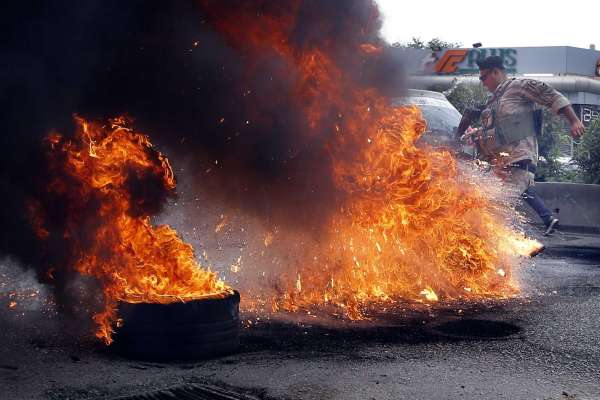 Lebanese soldiers remove burning tires placed by anti-government protesters to block a road in the town of Zouk Mosbeh, north of Beirut, Lebanon, Monday, April 27, 2020. Scattered anti-government protests broke out in several parts of Lebanon on Monday amid a crash in the local currency and a surge in food prices, leading to road closures Photo: Bilal Hussein, AP
Share:

The facades of several banks were smashed with at least one set on fire as protests fuelled by Lebanon’s economic crisis turned violent in the northern city of Tripoli overnight, a witness said.

The army said a fire-bomb was thrown at one of its vehicles and a hand grenade was hurled at a patrol during rioting in Tripoli, lightly wounding two soldiers. Public and private property had been attacked and banks set on fire, it said.

The army blamed the trouble on “a number of infiltrators” and called on peaceful protesters to quickly leave the streets.

The banking association declared all banks in Tripoli shut from Tuesday until security is restored, saying banks had been targeted in “serious attacks and rioting”.

Lebanon’s banks have been a frequent target of protesters during the financial and economic crisis that has led to the collapse in the value of the Lebanese pound and frozen savers out of their deposits.

The long-brewing crisis came to a head last year as capital inflows to Lebanon slowed and protests erupted against its political elite. Since then, the pound has lost more than half its value, fuelling inflation in a country heavily dependent on imports.