In a huge blow to Lebanon economy, gas found not commercially viable 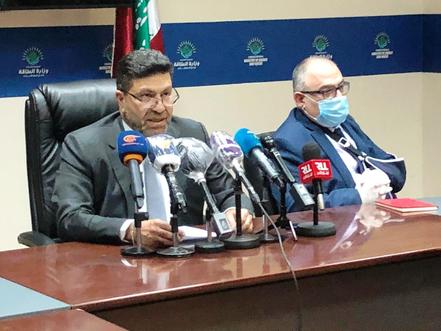 Energy Minister Raymond Ghajar ( L) said Monday that drilling off the Lebanese coast has shown some traces of gas but no commercially viable reserves
Share:

Drilling off the Lebanese coast has shown some traces of gas but no commercially viable reserves, Energy Minister Raymond Ghajar said on Monday.

“Initial drilling results showed the presence of gas at different depths in the geological layers” of block 4, he told reporters at a news conference.

But around two months after drilling started “no gas reservoir, no commercial reservoir was found,” he said.

Anticipation had been high in Lebanon for the results of gas and oil exploration, with many hoping a major hydrocarbon discovery could help redress the debt-burdened economy.

A consortium composed of energy giants Total, Eni and Novatek was awarded two of Lebanon’s 10 exploration blocks in 2018 — block 4, and block 9 near the Israeli border.

French oil firm Total has yet to release its full report on the exploration of block 4, with Ghajar saying it would be ready in two months.

It however confirmed the poor outcome for the first ever exploration well off the Lebanese coast in block 4.

“Despite the negative result, this well has provided valuable data and learnings that will be integrated into our evaluation of the area,” Total’s Lebanon managing director Ricardo Darre said in a statement.

Results from that site are needed to finalise a strategy on how best to probe block 9, where Ghajar said drilling would start as soon as possible.

Exploration of block 9 has been more controversial as Israel claims tiny part of it.

Total has in the past said it was aware of a border dispute affecting less than eight percent of block 9 and would drill away from that area.

Lebanon is one of the most indebted countries in the world, with a burden equivalent to 170 percent of its GDP.

It is grappling with its worst economic crisis since the 1975-1990 civil war, now compounded by a nationwide lockdown to stem the spread of the novel coronavirus.