Protests roar back in Lebanon as currency continues to sink 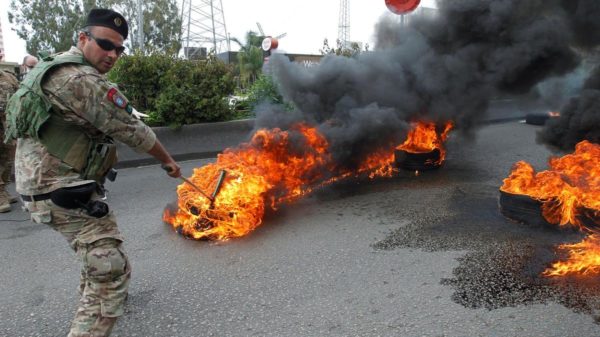 A Lebanese soldier tries to open a highway blocked by the burning tires, during a protest against the collapsing Lebanese pound currency and the price hikes in Zouk, north of Beirut. Reuters
Share:

Demonstrations are back in Lebanon with protesters blocking highways, clashing with police and ignoring curfews brought in to stop the coronavirus pandemic weeks after the three-month revolutionary movement faded from the streets.

In mid-October, mass rallies broke out at the political situation, the worst economic crisis in decades and shortage of dollars in a country that uses the US currency interchangeably with Lebanese pounds.

Police quickly intervened to reopen the highways on Monday where the demonstrators burned tyres to block roads, the state-run National News Agency said.

In Zalqa, north of Beirut, the Red Cross said that six people were injured. Videos online showed people shoving officers as they burned tires on highways out of the capital overnight and the protests continued through the day.

One of the major grievances of those on the streets is the sudden sharp depreciation in the value of the Lebanese pound against the dollar, which had already lost nearly 40 per cent of its value since late last year.

Officially pegged to the dollar at around 1,507, the government is trying to force currency traders not to sell above 3,200 pounds. But market rates have topped 4,000 in some places. At banks, that have brought in strict capital controls and restricted dollar withdrawals for months, the rates offered are far off the official peg sending the prices of goods soaring and the value of earnings down.

Three Lebanese banks have been targeted with small explosive devices in recent days, with a Credit Libanais branch in Tyre hit early on Sunday morning, a Fransabank branch in the southern city of Sidon on Saturday and a firebomb reportedly thrown at a bank in northern Tripoli.

But Mr Diab’s comments were met with a swift rebuttal from various key figures, including Amal head and long-time Parliament Speaker Nabih Berri.

In comments carried by Sunday’s An Nahar newspaper, Mr Berri said Lebanon could not afford to remove Mr Salameh just as it was entering negotiations with foreign bondholders after defaulting on debt obligations last month.

“Lebanese will wake up to the price of the dollar at 15,000 pounds,” he said. “I am not defending Salameh or anyone, I am defending Lebanon. And if the central bank of Lebanon does not remain, then everyone knows that depositors’ funds are gone forever.”

“We ask: who benefits from the destabilisation of the central bank governorship?” said Patriarch Bechara Rai. “We know the dire outcome, which is eliminating the confidence of the Lebanese people and [foreign] states in the constitutional foundations of the state.”

But Mr Diab has received backing from some, including Gebran Bassil, the head of the Free Patriotic Movement and son-in-law of the president.

The economic crisis has already risen poverty rates to 45 per cent of the population, according to official estimates and the economy is forecast to contract 12 per cent in 2020, according to the International Monetary Fund.