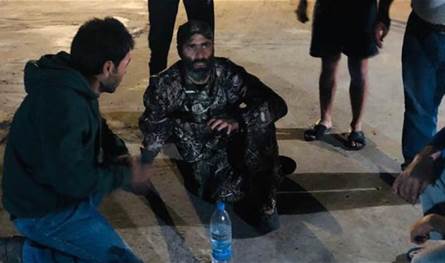 The suspect in the Baakline massacre Mazen Harfoush was arrested in the nearby village of Ainbal Shouf
Share:

The suspect in the Shouf town of Baakline massacre was arrested in the nearby village of Ainbal Shouf by its municipality police LBC reported .

He was identified as Mazen Harfoush and was found in a garden of a deserted home and looked exhausted .

He reportedly told the police that he also killed his own brother Fawzi Harfoush which brings the total death toll to 10 .

His 2 brothers Fawzi and Karim

2 people from Arsal and 5 Syrians

The murder of his wife was a huge shock to the community . This is what his wife Manal wrote on her facebook page months ago

My name is Manal and I am 32 years old. My husband is my lover, companion and my only support. We have the most beautiful girls in the world, Serena five years and Leeban two years and a half. I am a mathematics teacher. I finished my Masters a year ago with the support of my husband and Mom ( of course ) , and intend to start working on my Ph.D.
I love so much to visit my grandfather’s house, my family, my relationship with them, my aunts and my aunt’s madness ..

Yesterday Ya Libnan reported the following

BEIRUT: A gunman shot dead at least nine people, including at least five Syrians, in Baakline , the largest Druze town in the Shouf region of Mount Lebanon security sources said.

National News Agency initially reported seven people were killed in the shooting spree, but security sources later told a Lebanese daily that bodies of two more victims were found. One source warned that the death toll could rise further.

The victims were found in different locations in the Chouf town of Baakline southeast of Beirut, the sources added

The identity of the shooter and his motive were not immediately clear, NNA said. It said the shooter fled to nearby fields and was being hunted down by security forces. The perpetrator has not yet been caught, a security source said hours later.

NNA said a pump action rifle and a Kalashnikov assault rifle were used in the shootings.

One of the Lebanese victims was identified as Karim Harfoush, 27 who hails from the town of Baakline

Prime Minister Hassan Diab condemned the crime and demanded that security and judicial authorities expedite the investigation into the tragic incident to reveal the motive and apprehend the assailant.

“The crime has confused the area’s residents as well as security forces,” LBCI reported .

MP Marwan Hamadeh of the Democratic Gathering, who hails from the town, said there are indications that the killer could be “mentally disturbed.”

“He must be pursued, arrested and put on a quick trial,” he added.

TV networks later said that army helicopters were flying over the Baakline forests in search of the shooter.

Such shootings in Lebanon, where many people still keep rifles or pistols in their homes, are rare.

Lebanon is home to over a million Syrian refugees and hundreds of thousands of Syrian workers.

Updates : Baakline’s mayor, Abdullah al-Ghoseini, told the daily An-Nahar newspaper that the motive behind the shooting was unclear, adding that it took place in an area that includes housing units for Syrian workers.

MP Talal Arslan tweeted that “what happened in Baakline was a personal and family dispute that escalated into a horrible massacre,” citing “preliminary information.”

Lebanese security forces reportedly was able to find and arrest the perpetrator who was identified as M.H.

There are many conflicting reports about the massacre

According to a report by Reuters a security source said that it was a suspected “honour killing” and that five of those killed were Syrian, including two children aged 15 and 10, at the house under construction where the shooting took place.

The gunmen reportedly slaughtered his wife and shot dead eight other people, including his brother, Reuters added