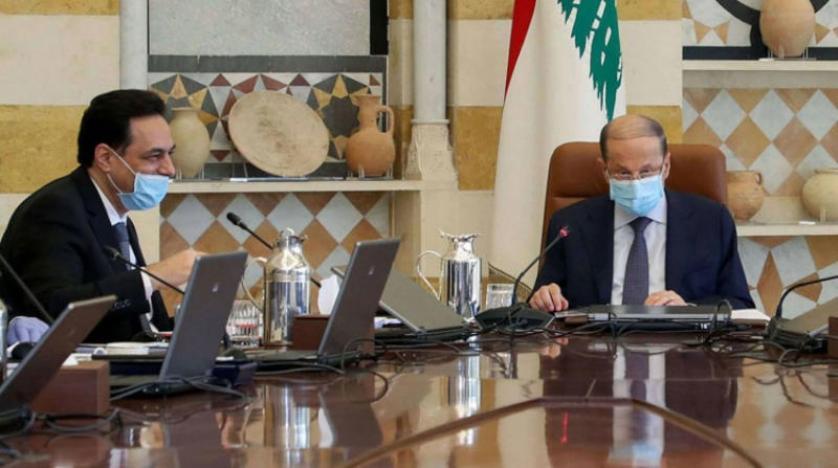 Lebanese President Michel Aoun has lashed out at politicians who criticize the work of the government, affirming that absurd criticism against the state is unacceptable and insults are inadmissible.

“Those politicians were the ones who destroyed the state and its institutions, and who stood behind the massive public debt in the country,” Aoun said at the beginning of a cabinet session held Thursday at the Presidential Palace in Baabda. He did not name the politicians he was referring to.

“From now on, absurd criticism is unacceptable and insults are inadmissible, especially if those criticizing have a history full of violations and attacks on the state and its institutions,” the President said.
He highlighted the importance of finalizing the financial reform plan at the nearest time possible, highlighting the need to embark on the recovery of stolen funds.
Commenting on the draft reform plan the government is currently studying, Prime Minister Hassan Diab assured that no Lebanese bank depositor would lose his money, but said the timing of retrieving deposits depended on the restructuring plan. But did not elaborate about the kind of money depositors will get from the banks since the banks are not allowing access to US dollar deposits

“We all know the reality of the situation and the money evaporated months ago and prior to our assumption of our posts,” Diab said. He did not elaborate on the evaporation of the money.
Speaking with reporters, the PM said his government has not discussed any haircuts on deposits .
He did not rule out the possibility of granting depositors bonds, pointing out that it could be advantageous.  he did not explain to whom this would be advantageous.
Diab said the reform plan could help reactivate the economy and bring fresh money from abroad, whether from the IMF, CEDRE or friendly nations or through a new economic drive and BOT (Build–operate–transfer)  projects)
On Thursday, the Cabinet also approved credits amounting to LL450 billion to be added to the 2020 state budget in order to pay the sums due to Lebanon’s private hospitals.
The PM indicated that the repatriation of Lebanese emigrants amid coronavirus lockdown measures would resume on April 26.

In its World Economic Outlook, the IMF said Lebanon, which has defaulted on its mountain of debt, faced a popular uprising and several weeks of lockdown due to the coronavirus pandemic, was the worst performing economy in the Middle East and North Africa.