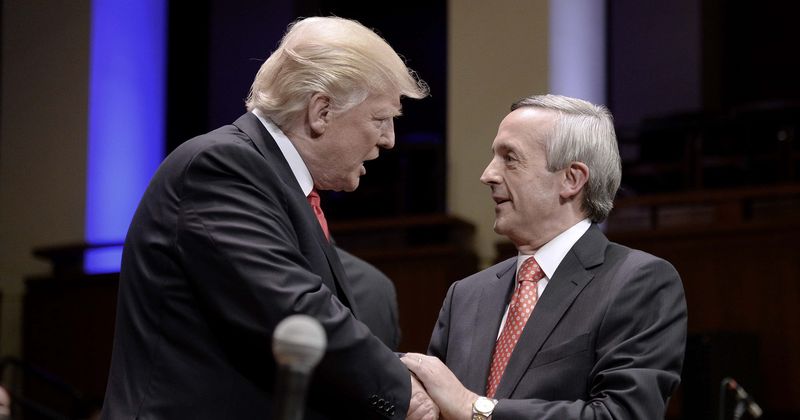 Donald Trump has skipped his daily coronavirus update for the first time in a month as he reveals he will tune in to an Easter Sunday service with a controversial pastor who says Islam ‘promotes pedophilia’ and homosexuality is ‘filthy’.

The president was notable by his absence on Easter Saturday as he failed to hold a coronavirus task force press briefing or any public update on the virus, which has now infected more than 530,000 Americans.

Trump has been addressing the nation on a daily basis, usually from the James S. Brady Press Briefing Room in the White House, since mid-March as the nation has grappled to bring the pandemic under control.

But on the day that the US became the deadliest nation in the world from coronavirus, as its death toll inched past hard-hit Italy‘s and topped 20,000, and on the eve of the day he had previously vowed the nation would reopen from the pandemic, the president was nowhere to be seen.

Instead, Trump simply tweeted to wish Americans a ‘safe and blessed Easter Sunday’ and to plug controversial pastor and his evangelical adviser Robert Jeffress whose service he said he will be watching remotely.

‘Wishing all a safe and blessed Easter Sunday. I will be tuning into Pastor @robertjeffress at firstdallas.org/liveworship Church in Dallas, Texas tomorrow morning at 10:20 AM Eastern,’ his tweet said.

Trump’s choice of pastor and one of his evangelical advisers has long been a source of concern for some due to the pastor’s extreme right-wing views.

Jeffress, pastor of the 4,000-member First Baptist Church in Dallas and a Fox News contributor, has sparked controversy on many occasions for his homophobic and anti-Islam comments.

‘The deep, dark, dirty secret of Islam: It is a religion that promotes pedophilia – sex with children. This so-called prophet Muhammad raped a 9-year-old girl – had sex with her,’ he said.

A few weeks later, he stood by his comments and even rallied Christians and conservatives to stand up to ‘this evil, evil religion’.

The pastor is also known for his discriminatory comments towards the LGBT community, having branded homosexuality ‘filthy’ and ‘degrading’.

‘What they [homosexuals] do is filthy. It is so degrading that it is beyond description. And it is their filthy behavior that explains why they are so much more prone to disease,’ he said.

The controversy doesn’t end there, after he has made no secret of his Republican views and even used his faith to promote his political support of Trump.

Former President Barack Obama was ‘paving the way’ for the Antichrist’, according to Jeffress in 2012.

By contrast, he agreed that Trump has been chosen by God to run America.

Citing the New Testament, Jeffress claimed in August 2017 that, ‘In the case of North Korea, God has given Trump authority to take out Kim Jong Un.’

As he watches the pastor’s service remotely, it will mark the first time since Trump entered the White House that he has remained in Washington DC for the Easter weekend.

Over the last three years, the president and his family have traveled to Mar-a-Lago in Florida and enjoyed spending the holidays with a brunch on the lawn of his Palm Beach estate and attending a service at Bethesda-by-the-Sea, an Episcopal church where Trump and First Lady Melania married in 2005.

The annual White House Easter Egg Roll, one of the oldest White House traditions, has also been cancelled.

The event has only ever been canceled on two other occasions since 1878 – during World War I and World War II.

Easter Sunday will mark another major milestone for the president – after he originally said he wanted the US to reopen for business and for social distancing rules be relaxed by April 12.

‘We’re opening up this incredible country. Because we have to do that. I would love to have it open by Easter,’ Trump said on March 24.

He repeated the importance of the date, saying the holiday was a possible deadline because ‘Easter’s a very special day for me.’

‘Wouldn’t it be great to have all the churches full?’ Trump asked. ‘You’ll have packed churches all over our country … I think it’ll be a beautiful time.’

The president was forced to later backpedal on his plans as the pandemic continued to spread and medical experts – including his own advisers – warned him that reopening the country too soon could see more deaths from the virus.

On March 29, in a rare moment of humility, he admitted that reopening for Easter would be a ‘mistake’ and announced a 30-day extension of his coronavirus guidelines.

Trump then toyed with the idea of allowing churches a social distancing exemption to celebrate Easter.

‘But somebody did say that, “well, then you’re sort of opening up to that little – do we want to take a chance in doing that when we’ve been doing so well?”‘

The president then said like many Americans he would watch both Palm Sunday and Easter Sunday services on his laptop.

On his last briefing on Good Friday, Trump said the upcoming decision of when to reopen the country for commerce, travel and ordinary life is among the biggest he has ever faced.

‘I’m going to have to make a decision, and I only hope to God that it’s the right decision,’ Trump said.

‘Without question it’s the biggest decision I’ve ever had to make.’

The president is now saying he will rely on scientists and a team of as-yet unannounced advisors as he ponders the decision.

Public health officials have warned that if Americans go back to school and work too soon, the nation could face a second wave of infection and additional economic setbacks.