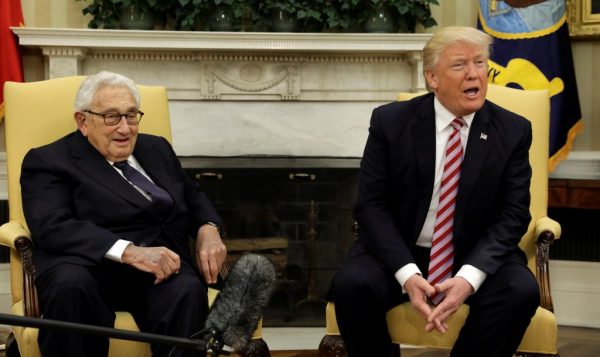 File photo : Former secretary of state Henry Kissinger, left, and President Trump speak to reporters in the Oval Office. May 10,2017 (Kevin Lamarque/Reuters) . In an editorial on The Wall Street Journal he tacitly criticize the Trump administration for its poor response to the COVID-19 pandemic
Share:

Former U.S. Secretary of State Henry A. Kissinger shared his diagnostic view of the COVID-19 pandemic on Friday , saying that it will forever alter the world order. While serving the secretary of state and national security adviser for the Nixon and Ford administrations, he contributed mainly to the establishment of diplomatic ties between the United States and China in 1987, making him living proof of Washington’s diplomatic achievements.

“The reality is the world will never be the same after the coronavirus,” said Kissinger in an editorial on The Wall Street Journal. “The U.S. must protect its citizens from disease while starting the urgent work of planning for a new epoch.”

“The surreal atmosphere of the COVID-19 pandemic calls to mind how I felt as a young man in the 84th Infantry Division during the Battle of the Bulge,” Kissinger wrote. As a son of German Jewish family, he joined World War II. Breaking out on Dec. 16, 1944, the Battle of the Bulge continued for more than a year until Jan. 25, 1945. It was the last major counteroffensive mission on the Western Front during the war, costing more than 190,000 lives.

“Now, as in late 1944, there is a sense of inchoate danger, aimed not at any particular person, but striking randomly and with devastation,” Kissinger said. However, he pointed out that there is a difference between the past and our time. “American endurance then was fortified by an ultimate national purpose. Now, in a divided country, efficient and farsighted government is necessary to overcome obstacles unprecedented in magnitude and global scope,” he wrote. His message intends to tacitly criticize the Trump administration for its poor response to the COVID-19 pandemic.

He was also critical that countries across the world are hell-bent on ensuring their own survival with their doors closed to each other. “Nations cohere and flourish on the belief that their institutions can foresee calamity, arrest its impact and restore stability. When the COVID-19 pandemic is over, many countries’ institutions will be perceived as having failed,” he said. The 96-year-old politician added that the virus does not know borders although global leaders are trying to address the crisis on a mainly national basis. He stressed that the key is not a purely national effort but greater international cooperation.

“While the assault on human health will – hopefully – be temporary, the political and economic upheaval it has unleashed could last for generations,” he elaborated, adding that the liberal world order can be put at risk. “The pandemic has prompted an anachronism, a revival of the walled city in an age when prosperity depends on global trade and movement of people.” He went on to emphasize that the United States should lead the effort to safeguard Enlightenment values.