Coronavirus: Glimmer of hope in Europe as US girds for ‘horrific’ weeks 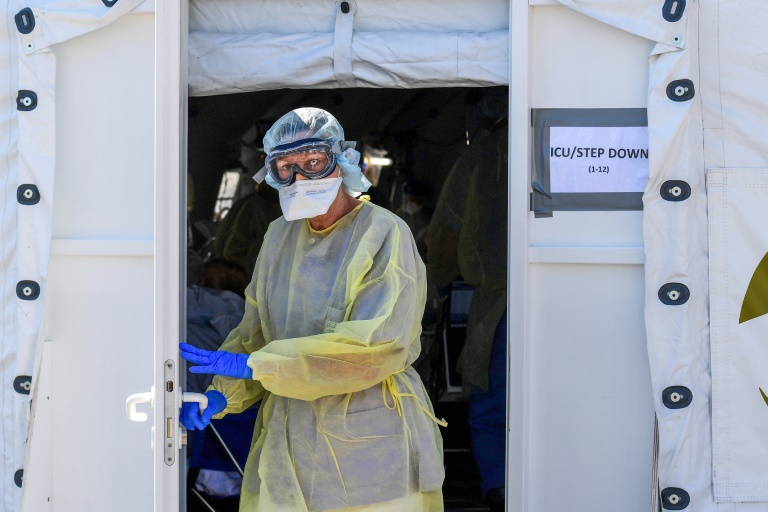 A doctor leaves an intensive care tent for patients contaminated with Covid-19 installed in front of the Cremona hospital, on April 2, 2020 in Italy (MIGUEL MEDINA / AFP) Slow spread of coronavirus figures spark timid glimmer of hope in Europe after Friday’s death toll surpassed 40,000, but disease continues to explode in the United States and the United Kingdom
Share:

By Phil Hazlewood with Michael Mathes in Washington and AFP bureaus

London (AFP) – European nations most ravaged by the new coronavirus on Sunday reported encouraging signs in their fight against the deadly pandemic, as the United States braced for what may be a “horrific” few weeks ahead.

While Queen Elizabeth II delivered a rare televised address in a bid to calm public nerves about the deadly outbreak, British Prime Minister Boris Johnson was taken to hospital 10 days after he was diagnosed with coronavirus.

Italy reported its lowest daily toll in two weeks, a possible indication the tide may be turning in the deadliest disaster the country has faced since World War II.

“This is good news but we should not let our guard down,” civil protection service chief Angelo Borrelli told reporters.

In Spain, officials said fatality numbers fell for the third straight day while France reported its lowest daily toll in a week.

Across the Atlantic, US President Donald Trump has warned Americans to brace for a “horrific” few weeks as the national death toll surged towards 10,000.

The number of confirmed US cases passed 335,000 — the highest in the world.

“The next week and a half, two weeks, I think they’re going to be very difficult,” Trump told reporters.

The rapid march of the virus has claimed over 69,000 lives in just three months and left about half the planet confined to their homes, drastically altering life for billions and plunging the global economy into recession.

With more than 1.25 million people confirmed as infected, the virus is also putting massive pressure on healthcare services, with nations both rich and poor struggling to find enough staff and equipment.

Pope Francis, head of the world’s 1.2 billion Catholics, appealed for people to show courage in the face of the pandemic.

The elderly pontiff, who himself has been tested twice for the virus, celebrated his Palm Sunday mass by livestream. But Saint Peter’s Square was deserted and the basilica was almost empty.

In Panama, Archbishop Jose Domingo Ulloa, wearing a white mask that covered his mouth and nose, delivered the traditional Palm Sunday blessing from a helicopter.

As Christians prepare for Easter, the holiest event on their religious calendar, many churches are closed and masses are being transmitted on television and social networks.

But not everywhere. In the latest sign of Americans defying stay-at-home orders, a Louisiana pastor continues to hold church services, a move blasted Sunday as “grossly irresponsible” by Governor John Bel Edwards.

In her address to Britain, which has almost 5,000 fatalities, the queen thanked healthcare workers.

“Together we are tackling this disease, and I want to reassure you that if we remain united and resolute, then we will overcome it,” she said.

Prime Minister Johnson, 55, was taken to hospital as a “precautionary step,” according to Downing Street, after failing to shake off coronavirus symptoms.

In Italy, which has been under a strict lockdown for almost a month, officials reported 525 new deaths over the past 24 hours, the lowest since March 19.

But its overall death toll remains the highest in the world at 15,887.

There were signs of hope too for Spain, which registered 674 deaths Sunday, its third straight day of declining numbers. The government has nevertheless announced it is extending a near-total lockdown until April 25.

At a field hospital set up at a Madrid conference centre, staff applauded whenever a patient was healthy enough to be discharged.

Builder Eduardo Lopez, 59, gave a “10/10” rating to the staff who cared for him “with tenderness and a great dose of humanity”.

“This is going to be our Pearl Harbor moment, our 9/11 moment, only it’s not going to be localized,” he told Fox News Sunday. “It’s going to be happening all over the country.”

Sunday’s one-day rise of 1,212 dead was among the largest daily increases yet.

One member of Trump’s coronavirus task force, Deborah Birx, said she was impressed that Italy and Spain were “coming across their apex” and seeing reduced deaths after weeks of intensive mitigation efforts.

“That’s extraordinarily hopeful,” Birx said, adding she aimed to soon see a “stabilization” of cases across large cities like New York and Detroit.

Trump has insisted that the world’s largest economy could not remain shut forever, and has repeatedly discussed possibly reopening businesses.

New York state, the US epicentre, saw 594 deaths Sunday, slightly down from the previous day, but Governor Andrew Cuomo said it was too early to tell whether it was a “blip”.

Several Western countries including the US have encouraged mask use in public despite earlier saying only carers needed to cover their faces — a U-turn that has angered and confused some citizens.

The advice came after some studies suggested coronavirus could be spread through speaking and breathing, not just coughing and sneezing.

The World Health Organization is reviewing its guidance.

Governments have launched massive, unprecedented stimulus programmes to ease pain caused by the virus lockdowns, but economists warn that the crisis could worsen poverty levels with millions of jobs lost.

Iran, whose economy has suffered the double blow of the virus and punishing US sanctions, said it would allow “low-risk” economic activity to resume as daily infection rates fell for a fifth straight day.

Some people in poor countries are chafing against curfews destroying their livelihoods.

“How can anyone stay home without anything to eat?” asked Garcia Landu, a motorcycle taxi driver in Angola’s bustling capital Luanda.

“Better to die of this disease or a gunshot than to starve to death,” he said.