You may be able to spread coronavirus just by breathing, new report finds 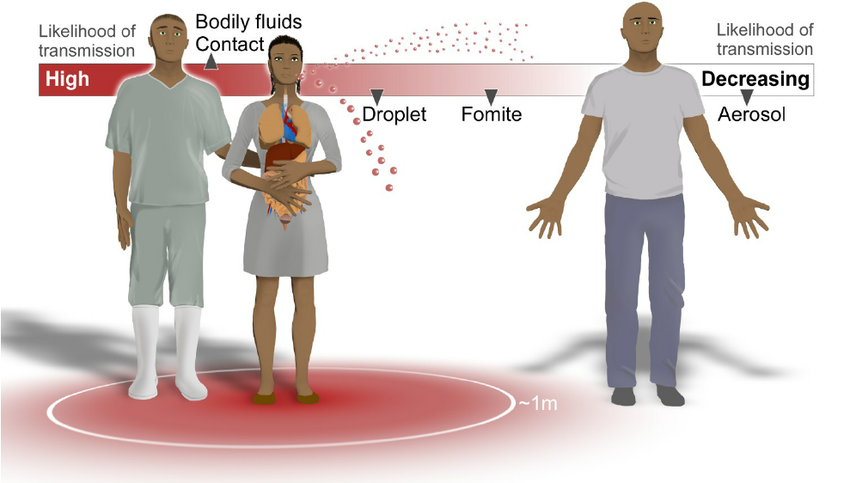 You may be able to spread coronavirus just by breathing, new report finds
Share:

Science’s COVID-19 reporting is supported by the Pulitzer Center.

The National Academy of Sciences (NAS) has given a boost to an unsettling idea: that the novel coronavirus can spread through the air—not just via the large droplets emitted in a cough or sneeze. Though current studies aren’t conclusive, “the results of available studies are consistent with aerosolization of virus from normal breathing,” Harvey Fineberg, who heads a standing committee on Emerging Infectious Diseases and 21st Century Health Threats, wrote in a 1 April letter to Kelvin Droegemeier, head of the White House Office of Science and Technology Policy.

Thus far, the U.S. Centers for Disease Control and Prevention and other health agencies have insisted the primary route of transmission for severe acute respiratory syndrome coronavirus 2 (SARS-CoV-2) is through the larger respiratory droplets, up to 1 millimeter across, that people expel when they cough and sneeze. Gravity grounds these droplets within 1 or 2 meters, although they deposit the virus on surfaces, from which people can pick it up and infect themselves by touching their mouth, nose, or eyes. But if the coronavirus can be suspended in the ultrafine mist that we produce when we exhale, protection becomes more difficult, strengthening the argument that all people should wear masks in public to reduce unwitting transmission of the virus from asymptomatic carriers.

The debate began when researchers reported earlier this year in The New England Journal of Medicine that SARS-CoV-2 can float in aerosol droplets—below 5 microns across—for up to 3 hours, and remain infectious. In their review, Fineberg and his NAS colleagues pointed to other studies, including a recent one by Joshua Santarpia and colleagues at the University of Nebraska Medical Center that found widespread evidence of viral RNA in isolation rooms of patients being treated for COVID-19. Viral RNA turned up on hard to reach surfaces, as well as in air samplers more than 2 meters from the patients. The presence of the RNA indicates virus can spread via aerosols, Santarpia and his colleagues concluded, although they did not find infectious viral particles.

Another preprint cited by the NAS panel raised concerns that personal protective equipment (PPE) could itself be a source of airborne contamination. In that work, researchers led by Yuan Liu at Wuhan University in China found the novel coronavirus can be resuspended in the air when health care workers remove their PPE, clean the floors, and move through infected areas. Taken together, “the presence of viral RNA in air droplets and aerosols indicates the possibility of viral transmissions via these routes,” the NAS panel concludes.

“[I’m] relieved to see aerosolization is accepted,” Kimberly Prather, an aerosol chemist at the University of California, San Diego, wrote in an email to ScienceInsider. “This added airborne pathway helps explain why it is spreading so fast.”

Not all experts agree that aerosols are a likely route of transmission. A 27 March scientific brief from the World Health Organization (WHO) states that aerosol transmission “may be possible in specific circumstances and settings that generate aerosols,” such as when severely ill patients are intubated with a breathing tube. However, the WHO experts say, an analysis of more than 75,000 coronavirus cases in China revealed no cases of airborne transmission. As for studies such as Santarpia’s, they note that “the detection of RNA in environmental samples based on PCR-based assays is not indicative of viable virus that could be transmissible.”

Nevertheless, CDC is apparently getting ready to change its stance on the subject. According to multiple news reports the agency is poised to recommend that all people in the United States wear cloth facemasks in public to reduce the spread of the virus.