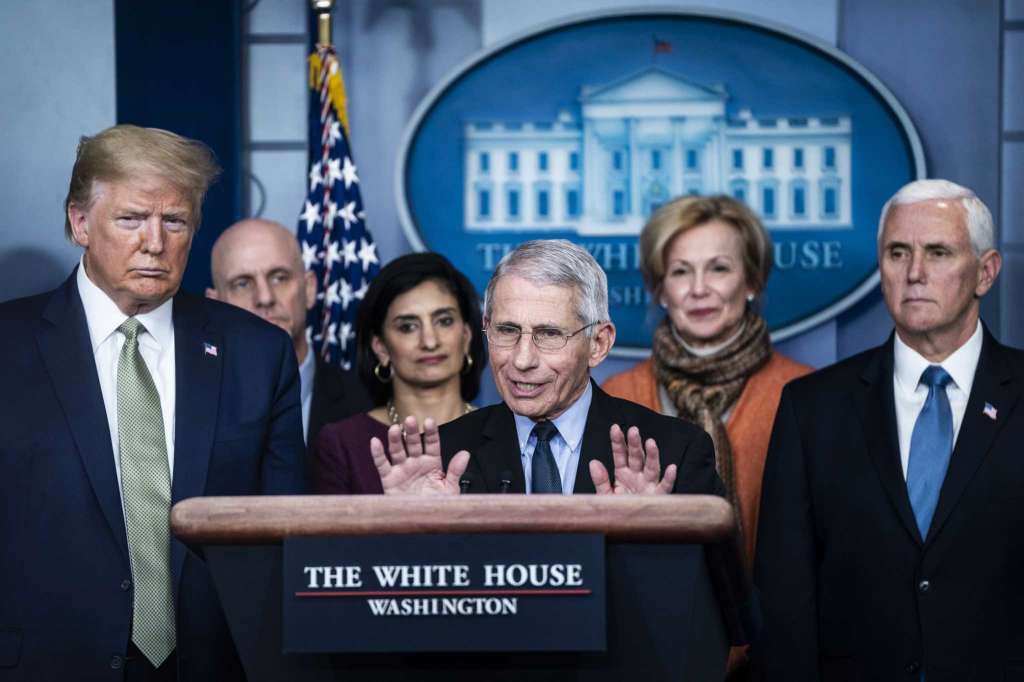 Anthony Fauci, the nation’s top infectious-diseases expert and the face of the U.S. response to the novel coronavirus pandemic, is facing growing threats to his personal safety, prompting the government to step up his security, according to people familiar with the matter.

The concerns include threats as well as unwelcome communications from fervent admirers, according to people with knowledge of deliberations inside the Department of Health and Human Services and the Department of Justice.

Fauci, 79, is the most outspoken member of the administration in favor of sweeping public health guidelines and is among the few officials willing to correct President Donald Trump’s misstatements. Along with Deborah Birx, the coordinator for the White House’s task force, Fauci has encouraged the president to extend the timeline for social-distancing guidelines, presenting him with grim models about the possible toll of the pandemic.

“Now is the time, whenever you’re having an effect, not to take your foot off the accelerator and on the brake, but to just press it down on the accelerator,” he said Tuesday as the White House’s task force made some of those models public, warning of 100,000 to 240,000 deaths in the United States.

The exact nature of the threats against him was not clear. Greater exposure has led to more praise for the doctor but also more criticism.

Fauci has become a public target for some right-wing commentators and bloggers, who exercise influence over parts of the president’s base. As they press for the president to ease restrictions to reinvigorate economic activity, some of these figures have assailed Fauci and questioned his expertise.

Last month, an article depicting him as an agent of the “deep state” gained nearly 25,000 interactions on Facebook – meaning likes, comments and shares – as it was posted to large pro-Trump groups with titles such as “Trump Strong” and “Tampa Bay Trump Club.”

Alex Azar, the HHS secretary, recently grew concerned about Fauci’s safety as his profile rose and he endured more vitriolic criticism online, according to people familiar with the situation. These people, like some others interviewed, spoke on the condition of anonymity to discuss sensitive internal deliberations.

In recent weeks, admirers have also approached Fauci, asking him to sign baseballs, along with other acts of adulation. It was determined that Fauci should have a security detail. Azar also has a security detail because he is in the presidential line of succession.

Asked Wednesday whether he was receiving security protection, Fauci told reporters, “I would have to refer you to HHS [inspector general] on that. I wouldn’t comment.”

The president interjected, saying, “He doesn’t need security. Everybody loves him.”

HHS asked the U.S. Marshals Service to deputize a group of agents in the office of the HHS inspector general to provide protective services for the doctor, according to an official with knowledge of the request.

The U.S. Marshals Service conveyed the request to the deputy attorney general, who has authority over deputations for the purpose of providing protective services, with the recommendation that it be approved, according to the official, who spoke on the condition of anonymity to reveal sensitive plans that the person was not authorized to discuss.

A Justice Department official signed paperwork Tuesday authorizing HHS to provide its own security detail to Fauci, according to an administration official.

An HHS spokesperson declined to discuss details of the doctor’s security but said: “Dr. Fauci is an integral part of the U.S. Government’s response against covid-19. Among other efforts, he is leading the development of a covid-19 vaccine and he regularly appears at White House press briefings and media interviews.”

At the briefings, Fauci, who has advised presidents of both parties as director of the National Institute of Allergy and Infectious Diseases, has spoken authoritatively about the spread of the coronavirus and the sacrifices involved in mitigating its effects.

He has at times corrected the president, in particular when prompted by reporters. After Trump said a covid-19 vaccine would be available in a couple of months, Fauci said it would in fact be available in about a year to a year and a half, at best.

His role has turned him into a hero for some. When he was absent from a briefing last month, followers who had grown accustomed to his frank assessments of the outbreak were alarmed that he might have been sidelined for his forthrightness. Many took to Twitter to ask, “Where is Dr. Fauci?” causing the question to trend on the platform.

He gained viral attention two days later when he placed his hand in front of his face in a gesture of apparent disbelief as Trump referred to the State Department as the “deep state department” from the White House briefing room.

Fauci has also given several interviews in which he has tempered praise for the president with doubts about his pronouncements, including about the viability of anti-malarial drugs as a treatment for the novel coronavirus. Most notably, he told the journal Science that he attempts to guide Trump’s statements but “can’t jump in front of the microphone and push him down.”

These moves have inspired fandom. But they have also drawn scorn from some of the president’s most vocal supporters, even as both men have sought to tamp down the appearance of tension.

“The president was right, and frankly Fauci was wrong,” Lou Dobbs said last week on his show on the Fox Business Network, referring to the use of experimental medicine.

Right-wing news and opinion sites have gone further, launching baseless smears against the doctor that have gained significant traction within pro-Trump communities online.

Outlets such as the Gateway Pundit and American Thinker seized on a 2013 email – released by WikiLeaks as part of a cache of communications hacked by Russian operatives – in which Fauci praised Hillary Clinton’s “stamina and capability” during her testimony as secretary of state before the congressional committee investigating the attacks in Benghazi, Libya.

The headline in the American Thinker referred to Fauci as a “Deep-State Hillary Clinton-loving stooge.” The author, Peter Barry Chowka, didn’t respond to requests for comment. When asked about the relevance of Fauci’s emails to his role in advising the White House’s coronavirus response, Jim Hoft, the editor of the Gateway Pundit, said, “I don’t have a problem with more information being shared about the doctor.”

The outlet has continued to criticize Fauci in recent days, saying that by offering new predictions about the possible death toll, Fauci and others were “going to destroy the U.S. economy based on total guesses and hysterical predictions.”

Several senior administration officials said that Trump respects Fauci and that the two generally have a good working relationship. Trump heeded the guidance of Fauci and Birx this week when he announced his administration would extend social-distancing guidelines for another 30 days. Last week, many health officials and experts grew worried when Trump said he hoped to reopen the country by Easter, even as coronavirus cases in the United States continue to rapidly climb.

The immunologist, who graduated first in his class from Cornell’s medical school, has been the director of the National Institute of Allergy and Infectious Diseases since 1984. Between 1983 and 2002, he was the 13th-most-cited scientist among the 2.5 million to 3 million authors worldwide and across all disciplines publishing in scientific journals, according to the Institute for Scientific Information.