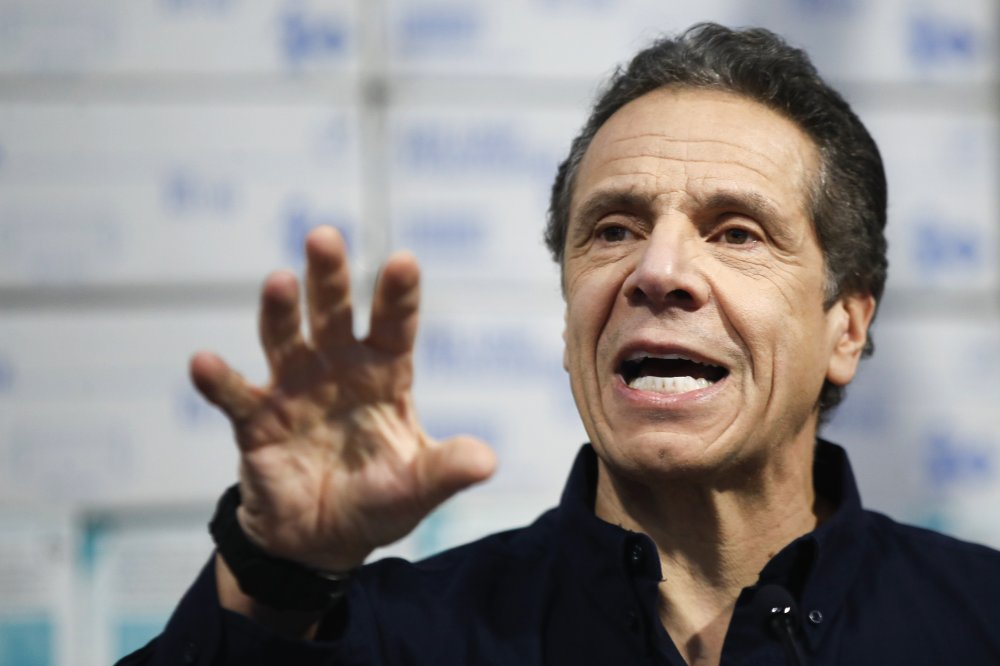 New York Gov. Andrew Cuomo speaks during a news conference against a backdrop of medical supplies at the Jacob Javits Center that will house a temporary hospital in response to the COVID-19 outbreak, Tuesday, March 24, 2020, in New York. Cuomo sounded his most dire warning yet about the coronavirus pandemic, saying the infection rate in New York is accelerating and the state could be as close as two weeks away from a crisis that projects 40,000 people in intensive care. (AP Photo/John Minchillo)
Share:

AUSTIN, Texas (AP) — Governors across the nation on Tuesday rejected President Donald Trump’s new accelerated timeline for reopening the U.S. economy, as they continued to impose more restrictions on travel and public life in an attempt to curb the spread of the coronavirus.

The dismissal of Trump’s mid-April timeframe for a national reopening came from Republicans and Democrats, from leaders struggling to manage hot spots of the outbreak and those still bracing for the worst. Maryland Gov. Larry Hogan, the head of the National Governors Association and a Republican, called the messaging confusing since most leaders are still focused on enforcing the restrictions, not easing them. He accused the White House of running on a schedule made of some “imaginary clock.”

The pushback suggests Trump’s talk of an early reboot is unlikely to gain traction. In most cases, it’s state leaders — not the federal government — who are responsible for both imposing and lifting the stay-at-home orders and other restrictions intended to stop the contagion.

But the governors’ reaction also revealed the striking disconnect and growing tensions between Trump and the state leaders closer to the front lines of a crisis that threatens to overwhelm U.S. hospitals and claim thousands of lives.

The president is eager to get the U.S. back to work as the crisis takes a political toll and the economy, which had been the cornerstone of his re-election bid, begins to wobble. The economic damage could be worse than the death toll from the virus, he has said. As soon as next week, Trump wants to take another look at recommendations about business closures and self-isolation, and said Tuesday the country could reopen by Easter Sunday — less than a month away. “Our people want to return to work,” he said.

But governors suggested that view had little connection to the reality they’re facing. California Democratic Gov. Gavin Newsom said he and Trump are “clearly operating under a different set of assumptions.” California, home to 40 million people and the world’s fifth-largest economy, reported hundreds of new known cases of COVID 19 and now has about 3000, according to a tally by Johns Hopkins University.

In New York, Democratic Gov. Andrew Cuomo on Tuesday said the infection rate was doubling every three days and pleaded for more federal help as the number of cases in the state surpassed 30,000.

“If you ask the American people to choose between public health and the economy, then it’s no contest. No American is going to say accelerate the economy at the cost of human life,” Cuomo told reporters Tuesday. “Job one has to be save lives. That has to be the priority.”

Even some of Trump’s usual allies are continuing to move ahead with tighter controls on travel, commerce and mobility, despite the president’s words. In Texas, Republican Gov. Greg Abbott has endorsed stay-at-home orders that continued to spread through the biggest cities. Arizona Gov. Doug Ducey said public health needed to come first, and South Dakota Gov. Krisiti Noem is stressing limiting business activity, not relaxing them.

“This situation is not going to be over in a week,” said Noem, whose state has more than two dozen cases. “We have another eight weeks until we see our peak infection rate.”

The U.S. is now more than a week into an unprecedented effort to encourage all Americans to drastically scale back their public activities. The orders closing schools, restaurants and businesses have largely come from a patchwork of local and state governments — with areas hit hardest imposing the most restrictions, while other communities are still weighing tighter rules.

That means the White House is eyeing ways to ease the advisories while some areas are still ramping up their responses — a mixed message that some governors worried would lead Americans to ignore the orders of local officials.

Michigan’s Gretchen Whitmer, a Democrat, told WWMT-TV/Sinclair Broadcast Group that Trump’s “off-the-cuff statements are really going to undermine our ability to protect people.” Illinois Gov. J.B. Pritzker said Trump was “not taking into account the true damage that this will do to our country if we see truly millions of people die.”

Trump has defended his handling of the outbreak and argued that his administration is doing all it can to help governors.

“They shouldn’t be hitting us,” he said on Fox News. “The fact is we’ve done a lot.”

Among the few statehouse leaders to publicly endorse Trump’s view was Texas’ lieutenant governor, Dan Patrick, 69, who on Monday suggested that people his age and older can “take care of ourselves ” as the nation gets back to work. The Centers for Disease Control and Prevention says people over 65 are at higher risk for the disease.

Friction between Trump and the governors has been steady throughout the crisis. The president said last week that states should be doing more to obtain their own critically needed supplies while insisting that the federal government was not a shipping clerk. States, meanwhile, have been pressing the government to help procure necessary protective and breathing equipment.

On Tuesday, Trump suggested any shortage of ventilators was on the states.

“All they had to do was order them two years ago, but they decided not to do it. They can’t blame us for that,” he said on Fox News.

“Some of the messaging coming out of the administration doesn’t match,” Hogan, the Maryland governor, told CNN. “We don’t think that we’re going to be in any way ready to be out of this in five or six days or so, or whenever this 15 days is up from the time that they started this imaginary clock.”

For most people, the coronavirus causes only mild or moderate symptoms, such as fever and cough. For some, especially older adults and people with existing health problems, it can cause more severe illness, including pneumonia. Worldwide, nearly 470, 000cases have been reported, and while most people recover in weeks, more than 21,200 have died from the virus.