Chidiac reveals she tested positive for Coronavirus after returning from Paris 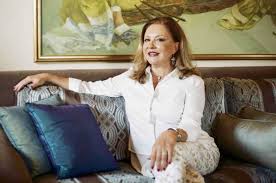 Prominent journalist and former minister May Chidiac revealed Monday that she has tested positive for the novel coronavirus.

“After my return from the French capital Paris last week, I developed some symptoms similar to those of coronavirus, which required immediate home isolation,” she said in a statement.

“On Saturday, I underwent medical examinations at the Hotel Dieu hospital to identify the reason behind the symptoms, and after the results of the tests came out a while ago, I was asked to head to hospital for treatment after my infection with the virus was confirmed,” Chidiac added.

She also noted that her condition “is not critical,” adding that she will soon join the ranks of those who recovered from the disease.

The former anchor at Lebanese Broadcasting Corporation (LBC) was a well known outspoken critic of Syria for keeping troops stationed in Lebanon after the end of the Lebanese Civil War and charged that the Taif Accords stipulated that Syria withdraw from Lebanon.

Chidiac survived an assassination attempt in September 2005 but she lost her left leg and left arm in the attack.

On the day she was attacked, after the Cedar Revolution and Syria’s troop withdrawal from Lebanon in 2005 , she hosted a talk show in which she criticized what she called Syria’s continuous meddling in Lebanon’s affairs and voiced fears of further violence ahead of the UN report on the death of the former prime minister, Rafik Hariri.

She served as state minister for administrative development in Saad Hariri’s government between 2019 and 2020.

Lebanon has so far confirmed 67 coronavirus cases . Most of the cases were of people who returned from Iran and Italy . Iran is epicenter of the virus in the. Middle East